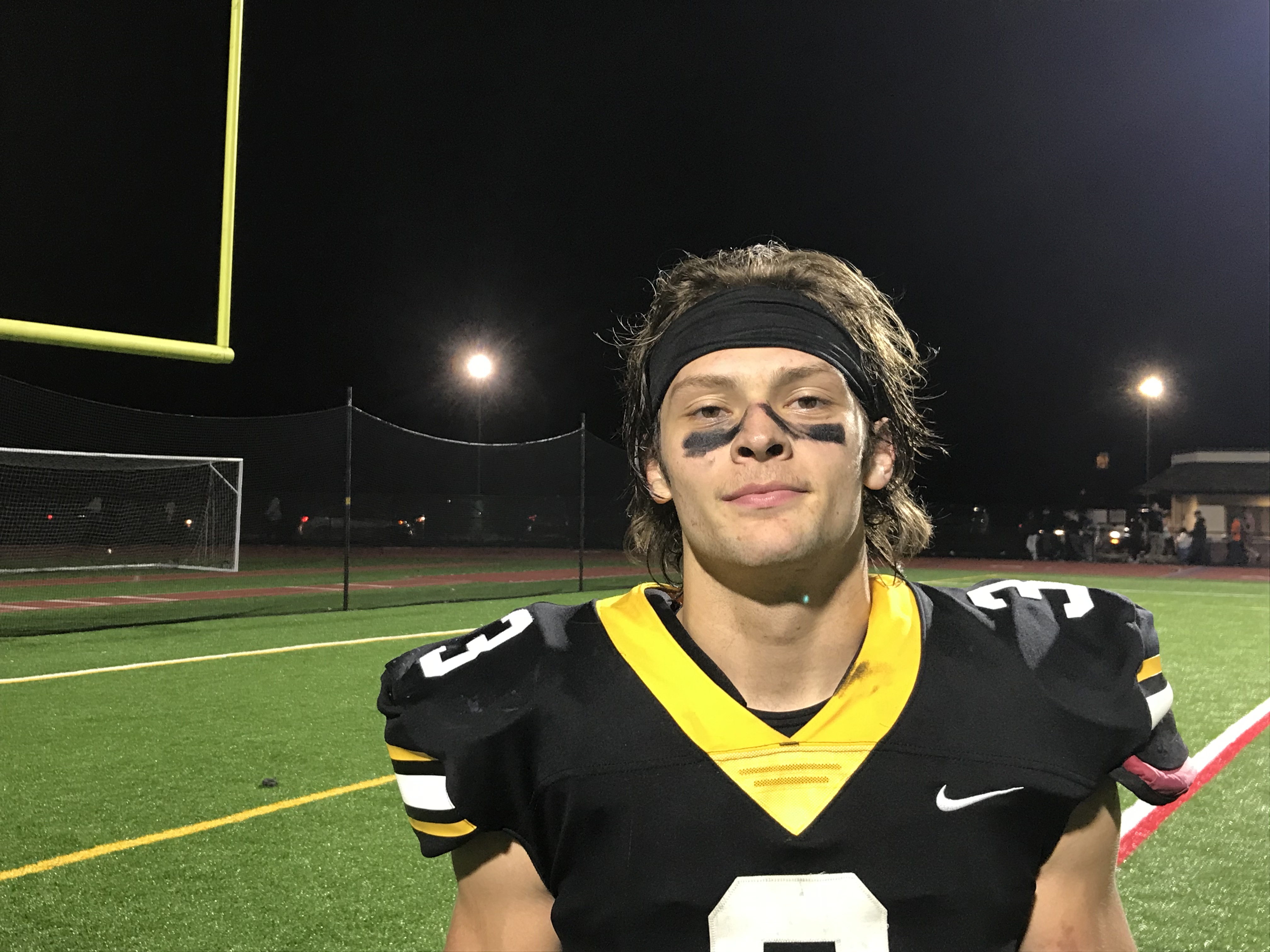 DOYLESTOWN >> Jack Fallon went from seemingly tackled well short of a first down to somehow dashing down the sideline.

“I got the ball and I knew I had to get the first down,”  the Central Bucks West senior said. “And the kid stepped off so I knew I had to keep going and I took off, go for the end zone. Then we punched it in two plays later.”

Hauling in a short pass from Jack Neri on 3rd and 11, Fallon slid out of the grasp of a pair of North Penn defenders, evaded another tackle attempt then raced 43 yards down to the Knights 15. Fallon burst up the middle for a 9-yard touchdown two plays later to tie the game at 26. Bailey Moyer’s extra point gave the Bucks the lead with just 2:52 left in the fourth quarter.

#FOOTBALL: Play of the game in @Buck_Nation’s 27-26 win over North Penn. @JackFallon_ somehow breaks free of tackles after a short pass on 3rd & 11 and dashes 43 yards down to the 15 late 4Q. Bucks take the lead for good on Fallon’s 9-yard TD 2 plays later. pic.twitter.com/1RQ7aNP6ZE

Fallon’s escape act and a late defensive stand put and end to almost two decades of frustration against the Knights, CB West keeping its perfect record intact and clinching at least a share of the SOL Continental Conference title with a 27-26 victory Friday night at War Memorial Field.

“It’s a statement win right there,” Fallon said. “People keep telling us we haven’t played anyone, for them to come in here and we beat them, it just gives us so much more momentum and it keeps us going throughout the season.”

Fallon ran for a pair of touchdowns and finished with 116 yards on 24 carries. He also caught a pair of passes for 46 yards while his interception sealed the first win for the Bucks (8-0, 5-0 conference) over North Penn since 2000. West had lost the last 12 games in the rivalry coming into Friday’s matchup.

“Our motto this week was you’re not going to win a heavyweight fight dancing around the ring,” CB West coach Rob Rowan said. “So we came out and swang and they did too and we knew they were going to swing back and we just ended up on the right side.”

North Penn (6-2, 3-1) took a 26-20 lead late in the third quarter but chances to extend its lead were hurt by fumbles as the Knights lost their first SOL conference game since falling to Central Bucks South 28-27 in 2014.

“To the victors go the spoils. Three (Fallon) made a great play in the flat, we’re all over him, I didn’t even think he’s going to catch the ball let alone break a tackle, North Penn coach Dick Beck said. “But you know we relaxed. We had a broken coverage on their second touchdown, too many mistakes. Two of their first three touchdowns were mental errors but I thought they played great, congratulations to them. I thought our kids played tough but too many mental errors I think really hurt us.”

Khalani Easton paced the Knights on the ground with a game-high 152 yards on 22 carries. Quarterback Ryan Zeltt had 207 yards on 9-of-20 passing with one touchdown and two interceptions. Kenneth Grandy caught four passes for 114 yards and a touchdown and also ran for another score.

North Penn looks to bounce back when they visit Central Bucks South.

Neri finished 7-of-15 passing for 100 yards and a touchdown for the Bucks, who can claim the outright Continental title with a win at Souderton Friday.

“Look, I’m going to tell our guys to soak up every bit of this up until Sunday morning like we always do and we wake up Sunday morning and we turn the page and we’re on to Souderton,” Rowan said. “I don’t know what they did tonight but they’re a freaking really good football team. We got a murderer’s row here in the last three weeks but as you can see our guys they’ll be ready and we’ll fight.”

After the sides ended the first half even at 20, North Penn went ahead at 1:11 in the third quarter when Zeltt went deep down the middle to Kenneth Grandy for a 53-yard touchdown. A missed extra point kept the Knights up 26-20.

Still up six, North Penn had two drives to make it two-possession game only for both to be curtailed by fumbles. The Knights coughed up the ball at their own 49 at 8:52 in the fourth but held on 4th-and-4 at the NP 43 to force a turnover on downs. A fumbled snap on a 3rd-and-7 on North Penn’s next series forced the Knights to punt, giving West the ball back at the Bucks 18 with 5:40 remaining.

“When Khalani fumbled the second time, he made a great run but look as we tried to preach to him, you got to hold the ball, you got to put two hands on the ball when you feel like you’re going down,” Beck said. “And then we fumble a snap on a play I thought we had a great play called which really hurt us too. Look, we made some mental errors tonight, it’s on everybody, it’s on the coaches, it’s on the players, it’s on everybody. We got to better.”

Fallon started the West drive with a 25-yard run out to the Bucks 43 but the series appeared to be in trouble with West facing a 3rd-and-11 from the 42. Fallon, however, slipped out of the Knights’ grasps and raced to the NP 15, setting up his go-ahead touchdown that came two snaps later.

“That’s who he is,” said Rowan of Fallon. “And I will tell you I think the throw was just equally as good. Neri had two guys hanging all over him and he just made an incredible throw and that’s who Jack is — Fallon — he’s just, in my opinion, he’s the MVP of the league and he is an absolute just grinder of a kid and that’s who he is, fighting for the extra yards and he’s dynamic.”

North Penn’s bid for a comeback started with 2:47 left at its own 19. The Knights moved the ball to the Bucks 44 only for an intentional ground call to push them back to their own 34. Zeltt’s fourth-down downfield toss was picked off by Fallon and a few moments later the West students — who had staged a Pink Out — stormed the field to celebrate.

“It’s a once-in-a-lifetime experience,” Fallon said. “I’ll try to savor this moment cause you one get high school football one time.”

Central Bucks West needed just four plays to score on the game’s opening possession, Fallon capping the 61-yard drive with a 14-yard touchdown run at 10:25 in the first quarter.

A Tyler Fasti interception set the Bucks up on the North Penn 30 and on a 4th-and-3 Neri rolled right and found Nick Olear alone in the end zone for a 23-yard touchdown. A blocked extra point made it 13-0 at 7:28.

“We came out and we executed really well in the beginning,” Rowan said. “And I think maybe we caught them off guard a little bit there. And they settled in and we settled in and I knew, I just knew it was going to be four-quarter, 48-minute battle and fortunately for us at the end there we were able to apply some pressure and come up on the right side.

CB West answered on its next possession, Nick Tumolo’s 14-yard touchdown run finishing a six-play, 56-yard drive at 5:13 to give the Bucks back the lead 20-14. The Knights found the end zone on the following series. On 3rd-and-10 from the West 38, Grandy snagged a Zeltt pass down at the one with Nate Brown punching it across the goal line on the next play at 2:31. A blocked extra point kept the score even 20-20.