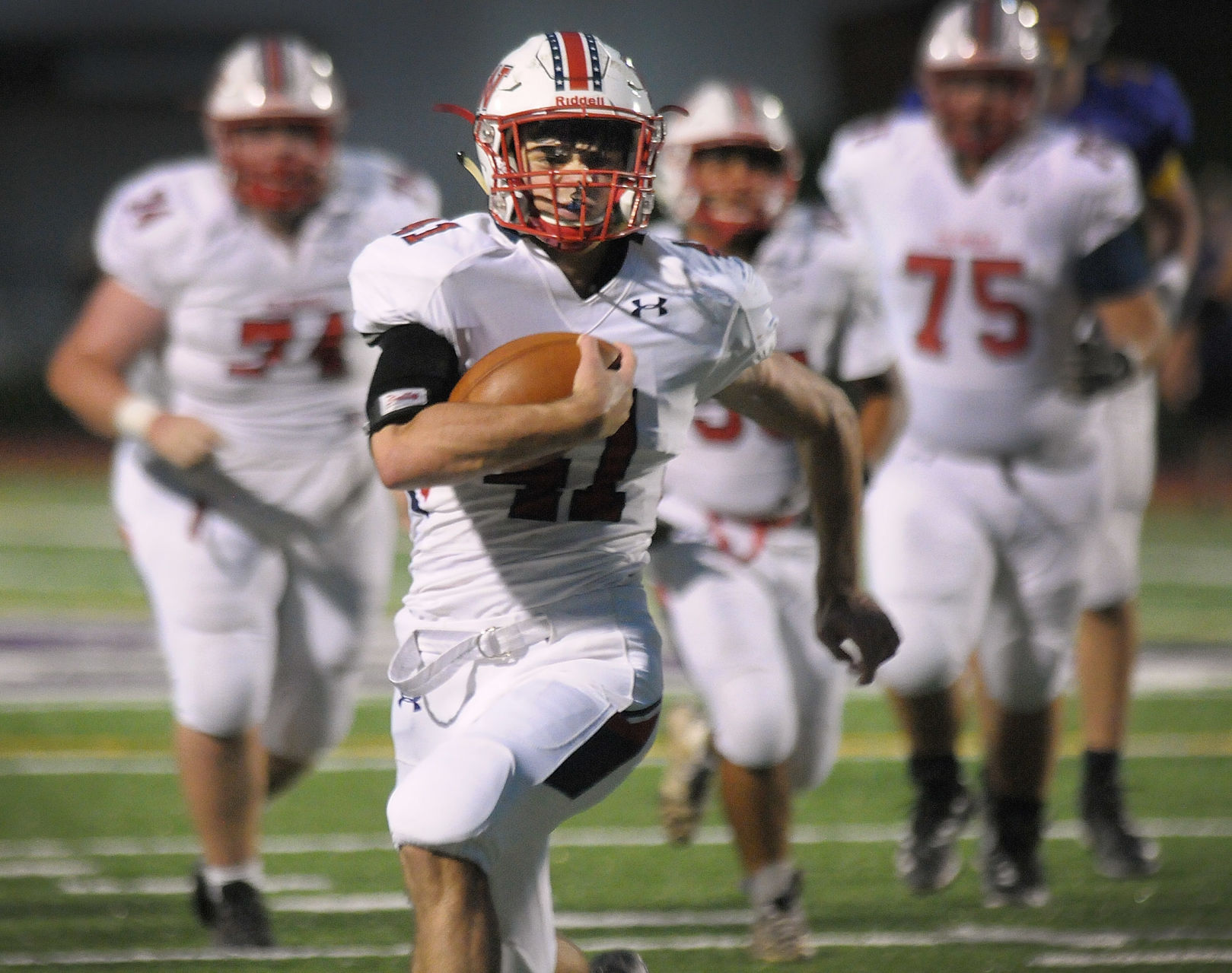 WHITEMARSH >> After suffering its first loss of the year in heartbreaking fashion last week, there were two ways Plymouth Whitemarsh’s season could go.

The Colonials could let the loss snowball and the season spiral away or they could get back to their winning ways that led to five straight victories to start the 2019 campaign.

A 42-14 Suburban One League American Conference win over Quakertown Friday night at Plymouth Whitemarsh High School says it was the latter.

“There is always a concern (after a loss) and that’s something we addressed,” head coach Dan Chang said. “I’ve been saying all year our strength of our team is our leadership and our seniors. They made sure (the loss didn’t carry over to) tonight. You could hear it. You could feel it. Even during school today and all throughout pregame — they were ready to go.”

The Colonials (6-1, 3-1) couldn’t wait to get back on the field after their four-point loss to Cheltenham last week and it showed in practice.

“Practice was definitely different,” senior captain Michael Paciello said. “It was really chippy. Our practices are really competitive. We’re really competitive against the scout team and I think that really helps our first-team out. We have some good subs. They give us the best look we can possibly get. It’s tough sometimes, but it was definitely a different mentality. We’re coming right back to where we were.”

“It was definitely chippier,” Chang added. “A big part of our success this year has been our scout team. Our scout team is very good this year. We have a lot of our starters who don’t play on the other side of the ball pushing us. The other guys on our team who are playing scout are really giving us good looks. It gets very competitive. Sometimes when you have a scout team it’s not the same speed, but I think we had a pretty good pace all week with these guys.”

Paciello finished the game with 131 yards and three touchdowns on six rushing attempts and added one catch for 25 yards.

“It feels nice,” he said of his dominance, “but I’m just thinking about the next play trying to get on with it. I wouldn’t say unstoppable, but I do feel a little confidence boost when everything is working. When you trust your other teammates you get through with it.”

He scored the first two touchdowns of the game. The first a 14-yarder and the second from midfield — both coming in the first quarter. His third covered 55 yards on the second play after halftime to give the Colonials a 42-0 lead.

He led a ground attack that piled up 334 yards and six touchdowns on 34 attempts.

“We game-planned well,” Paciello said. “We definitely practiced against a lot of different looks so we knew what to run when we saw what we were getting. I think our o-line definitely gave a good push and we had really great downfield blocking.”

“It’s always good to see our running game working,” Chang said. “The offensive line has been steady all year. It really comes down to how they play each week and they have not disappointed.”

Plymouth Whitemarsh allowed less than 10 points per game during its five-game winning streak to start the season. Most of those points came after the games were decided.

After allowing 28 points in a loss to Cheltenham, the Colonials defense was dominant again.

They kept the Panthers (3-5, 3-2) off the board until the middle of the third quarter when it was 42-0. Christian Pierce forced a fumble in the first quarter that Josh Lynch recovered to set up Paciello’s first score. Pierce later grabbed an interception that he returned 45 yards for a touchdown, but it was called back for a block in the back.

“We came out ready to play,” Paciello said, “ready to bounce back after a tough one. We were really antsy to make a statement and really show what our defense can do.”

“Our defense is flying to the ball,” Chang said. “Danny Hannon jumped in there for Zach Trioli, who’s been a stud for us all year. Danny came in and played great. Phil Taormina is in for (Christopher) Pierce, who got hurt and Phil played great. It’s great to see that these next guys are ready to go and producing like that.”