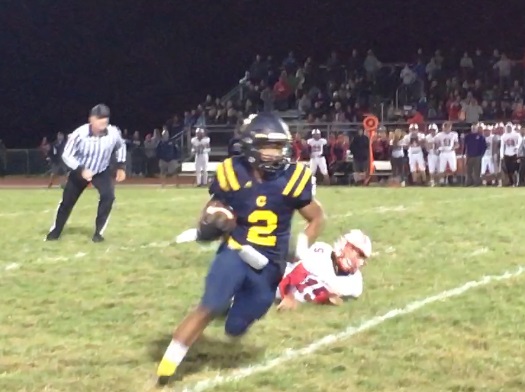 CHELTENHAM >> As soon as Sam Sykes hit the ballcarrier, he knew it was over.

A few minutes earlier, the Cheltenham junior had been subbed in for a key fourth-down play that he turned into a 47-yard touchdown. But Sykes’ main job is taking down runners as a linebacker for the Panthers and this was the biggest moment of the season for him and his teammates.

Sykes slipped in and made the tackle at the one, keeping Plymouth Whitemarsh out of the end zone as the Panthers held on for a 28-24 win to hand the Colonials their first loss and take sole possession of first in the SOL American on Friday night.

“I knew. The way I tackled him, I knew he wasn’t going anywhere.”

The battle for top billing in the SOL American lived up to the hype coming in. Plymouth Whitemarsh, which won just one game last year, was still perfect at 5-0 as they visited Cheltenham for Homecoming.

Cheltenham, fresh off a win over Upper Dublin last week, knew it was in for quite a night against PW’s triple-option offense and energized defense. With a short week of preparation, it was a task made much tougher and Panthers coach Ryan Nase wasn’t sure what his players were in for.

“It wasn’t pretty but I’m 35 years old and I haven’t been pretty one day in my life,” Nase said. “It isn’t always going to be pretty, but I’ll take it.”

Nase, who usually does his pregame talks off the cuff, had an ominous warning for his guys Friday. He told the Panthers to expect lots of things to go wrong and to find a way to withstand it. It seemed odd, considering PW ran just three plays in the first quarter and the Panthers took a 7-0 early in the second on an Adonis Hunter sneak.

Then, on the team’s next drive, Jamir Barnes lost a fumble and the triple option got it going as the Colonials marched down the field and tied the score. Nate Edwards ran the ensuing kickoff back 83 yards for a touchdown and the Panthers defense blocked a field goal at the halftime buzzer but Nase still couldn’t shake that uneasy feeling.

“They’re so well-coached, they’re so disciplined, they very rarely make mistakes and they know who they are,” Nase said of PW. “They just do what they do and they do it really well. I told all of their guys that I hope they’re not so defeated by this loss they can’t go make a run in playoffs. They’re going to get there and they have the ability to do it.”

PW tied the game up on the first drive of the second half and after Cheltenham made it 21-14 on another Hunter keeper, the Colonials responded with a TD on Larry McLaughlin’s keeper on the opening play of the final quarter.

Again, something went wrong for the Panthers. Normally sure-handed TJ Harris had the ball dislodged after a catch, with Phil Taorima emerging with it for the Colonials at midfield. PW turned that into a go-ahead field goal from Nicholas Choi.

Brian Dresnin rushed for 127 yards and a score, adding 24 receiving yards while Paciello picked up 61 yards on the ground.

“I told my guys I was proud of how we played, things didn’t go our way and I thought we got a couple bad bounces but we’re going to learn from this,” PW coach Dan Chang said. “We’re going to continue on, we have three more tough games to go and hopefully a playoff run, so our eyes are forward now.”

Cheltenham’s next drive didn’t do much on three plays and facing a 4th-and-7 with so much at stake, Nase called a timeout.

“Sam’s a great player and we know he’s a great player but we have so many guys on offense, he hasn’t really gotten his turn,” Nase said. “Jamir has an injury so he’s been having trouble catching the ball and I said ‘we’re taking a shot, Sam, go get it and go score.’”

Sykes lined up at receiver, came over the middle and made the catch. Then, he took off.

“I trusted our coaches and our system, we have a very good quarterback in Adonis Hunter, so he put it there and I was able to make a play,” Sykes said. “It was a little scary at first, but I trust all our guys and I knew we had to make a play.”

Panthers center Nasir Carson, who helped jam the line on the final defensive stand, gave a knowing grin before explaining Sykes simply showed everyone else what the guys in the program already knew.

“I know he can break tackles and he’s good with the ball,” Carson said. “I thought he was going down but I saw him break off and I knew that was going to the house. He can play offense too, he’s pretty good.”

Sykes side-stepped a defender going the other way, found the sideline and after getting a crunching block from Amani Ezell, was gone 47 yards to the end zone for a 28-24 lead.

“I just saw grass and I knew we were down so it was time to make a play,” Sykes said. “I just want to thank all my teammates and coaches. They make it easy for us and we just go out and do the work.”

A former offensive lineman, Nase is tough on his linemen and watches everything they do intently.

Carson, who plays nose tackle along with center knew that but he didn’t need any extra motivation on the final defensive play of the game. The junior lineman said things just clicked with the rush defense on that final drive, with most of PW’s yardage coming through the air.

“I wanted to win, I gave it my all the whole game,” Carson said. “Everybody knew what we needed to do, what the situation was and we just had to give it our all.”

Nase might’ve had a bad feeling before the game, but he used to challenge his players to see how they’d respond when things did go wrong. Backed up to their own endzone, with a struggling defense facing an adverse moment, they stood their ground.

“I believe in my guys, I know what they can do,” Carson said. “I’m proud that we did that and we came this far.”

“I was speechless, it was such a great moment and after the game, I was crying a little bit,” Sykes said. “I knew we needed to make a stop. It was fourth down, we had to put our big dogs up there and make a play.”

Playing quarterback in a triple-option scheme requires a certain skillset and feel for the game.

PW senior Larry McLaughlin runs the Colonials offense like an orchestral conductor, masking handoffs, running hard and throwing a pitch at just the right second. When needed, he delivers good passes too.

Friday, he was exceptional on the team’s final drive.

“We rely on Larry all the time and that drive was kind of his defining couple moments there,” Chang said. “He made plays out of nothing a couple times, made a great throw. He’s getting better and better and every week.”

McLaughlin kept the ball for a first down, then facing a 4th-and-7, hit Christian Pierce for eight yards to move the sticks and keep the game alive. Two plays later, he found running back Michael Paciello for 29 yards to give PW a first-and-goal at the Cheltenham nine.

He found Pierce for five more yards, then powered his way forward for two yards on third down, putting his team a yard away.

“We got our first taste of some pretty big adversity here today and were able to bounce back and keep fighting,” Chang said. “We have to pick it up a little, take it up that next notch in practice. We’re going to get great competition and we’ll be ready to go.”