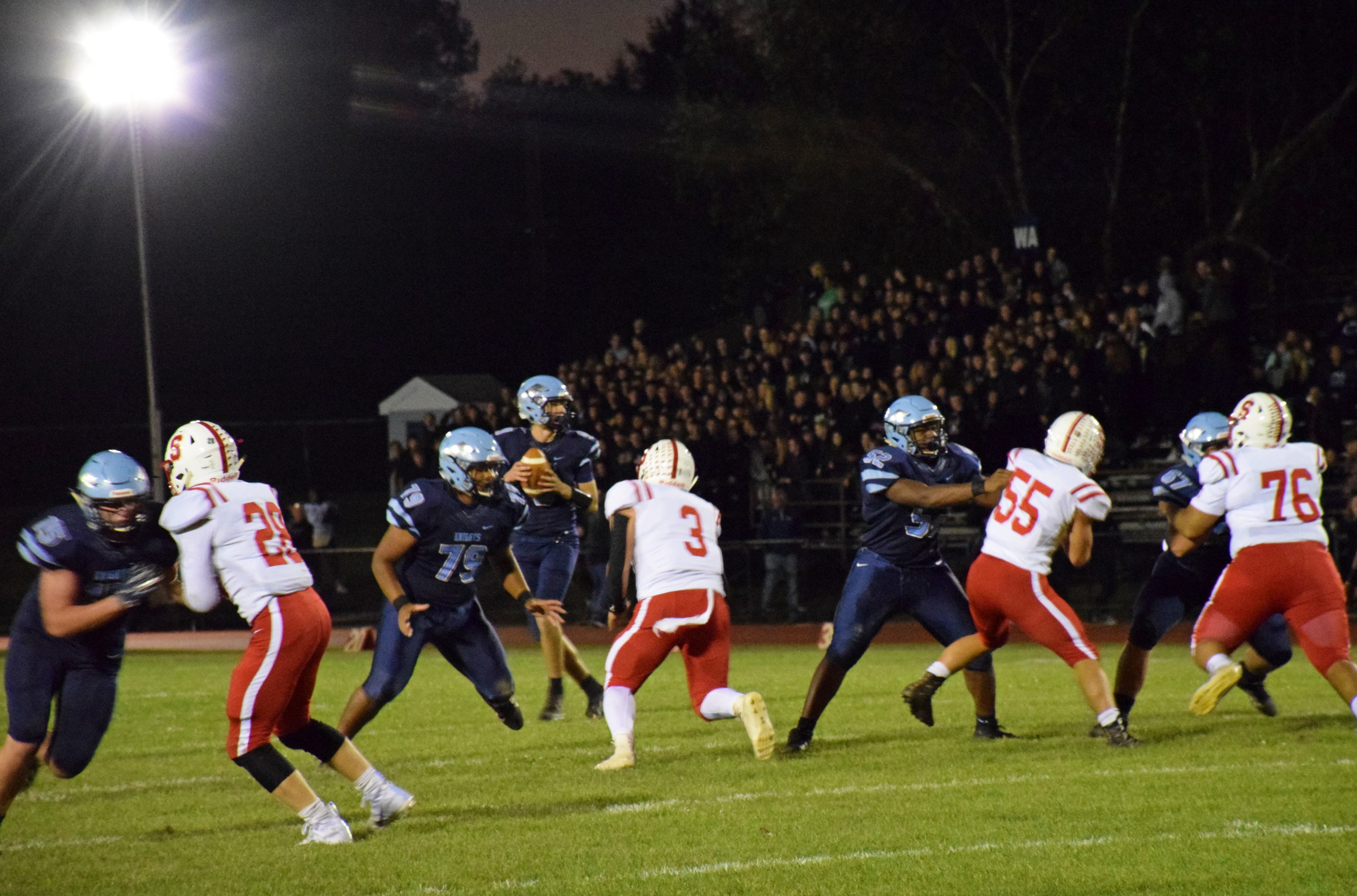 TOWAMENCIN >> RJ Macnamara had the first down, but the senior figured why stop there.

Hauling in a 3rd-and-9 pass from Ryan Zeltt, the North Penn senior bulldozed through a Souderton tackle attempt, got a block from Evan Spann to get down the sideline then cut past another Indians defender before getting over the goal line for a 63-yard touchdown with 4:15 before halftime.

“I just kept thinking I got to keep running,” Macnamara said. “Get the first down and then once I passed it, it was get more yards, get more yards, make sure the ball’s in my arms”.

Macnamara’s score gave the Knights a 26-21 lead and after an offensive slugfest in the first half, the North Penn defense reasserted itself after the break, shutting out Souderton in the second half to pull away and hand the Indians their first loss 47-21 at Crawford Stadium Friday night.

“I thought in the second half that was probably our best effort, our best half defensively of the year,” North Penn coach Dick Beck said.

Nothing stopped North Penn’s Ethan Spann from scoring a touchdown against Souderton during their game on Friday, Oct. 4, 2019. (Debby High/For MediaNews Group)

Macnamara finished the night with four touchdowns — three rushing, one receiving — and collected 151 yards on 20 carries while the NP defense held Big Red to just 41 of offense after halftime as the Knights (6-1, 3-0 SOL Continental) won their fifth straight.

“We just sat with the kids at halftime and said, ‘OK here’s what happened on the touchdowns, we got to make sure we’re in a little better shape,’” Beck said. “I felt like maybe we weren’t beating blocks enough, we were getting down-blocked and the guys weren’t crossing the tackles’ faces early.”

Kevon White returned the opening kickoff 98 yards for a touchdown and 7-0 North Penn lead only 16 seconds into the contest, but Souderton (5-1, 3-1) answered with a TD on its first drive and found the end zone on each of its first three possessions to lead 21-20 at 5:50 in the second quarter.

“First half, I thought we executed very well on offense,” Souderton coach Ed Gallagher said. “We did what we needed to do I think we had to punt one time and really did a nice job executing and going punch for punch with them but we just couldn’t keep it going in the second half.

#FOOTBALL: 4:15 2Q @KnightsLoyalty 26, Souderton 21. @MacnamaraRj catches a pass from Ryan Zeltt, sheds a tackle, cut back from the sideline & finds the end zone for a 63 yard TD. 2-point conversion no good. pic.twitter.com/FHYNltnhzR

“That was a big time momentum swing for us,” Beck said. “And to be able to take the ball and go I don’t know what did we do, 10 plays, 12 plays and punch it in without putting the ball in the air, we took about six or seven minutes off the clock. That was big for us.”

Souderton got inside the NP 40 on the ensuing drive but on a 4th and 8 from the 38 the Indians turned the ball over after gaining just a three yards on a completion. North Penn proceeded to go up 40-21 on Nate Brown’s 2-yard touchdown run with 6:46 left in the game.

Macnamara added his fourth touchdown with 1:16 left on a 58-yard touchdown run.

“They were just more physical, there’s no question about it,” Gallagher said. “They just came out and they took it to us and we couldn’t stop them. Honestly, we didn’t really stop them much we got one stop in the first half and our offense unfortunately couldn’t keep pace. And I thought they were more physical on both sides of the ball and the better team won tonight.”

Souderton’s DeAndre Wakefield runs during the first half against North Penn during their game on Friday, Oct. 4, 2019. (Debby High/For MediaNews Group)

DeAndre Wakefield paced Souderton with 90 yards and a touchdown on 11 carries while Jalen White had both a rushing and receiving touchdown.

Zeltt was 6-of-12 passing for 154 yards and two touchdowns. Kenneth Grandy added 61 yards on 13 carries for the Knights.

“Poor Khalani (Eaton) got hurt, but I thought Kenny stepped in and obviously RJ has a big night,” Beck said. “I can’t say enough about it was good to get Evan (Spann) back. He’s been on the bench with an ankle (injury) for the last couple weeks. Evan was pretty good tonight. He made a couple big plays. Man did the quarterback throw some nice balls.”

Kevon White got Friday off the quick and electric start, finding a seam on the opening kickoff then dashing down the left side for a 98-yard touchdown return for a 7-0 NP lead at 11:44 in the first quarter.

“When I got the ball, my team picked up all the blocks just the way it was designed and one of my teammates got the last block right up the middle,” he said. “And then I just saw nothing but green and just took it full speed.”

That was just the start of the first-half scoring as the teams traded off touchdowns on the matchup’s first six possessions.

“It’s kind of what I expected,” Macnamara said. “I’m not sure what anybody else did. I expected them to give us a fight.”

Souderton tied it 7-7 at 7:54 in the first quarter when Wakefield burst up the middle for a 38-yard TD run.

Spann evaded a few tackles attempts then plowed through another at the goal line for a 23-yard touchdown pass from Zeltt on a 4th-and-9 for a 14-7 North Penn edge at 3:16 in the first. But Souderton was back level at 10:04 in the second quarter on Jalen White’s 7-yard TD run.

Macnamara’s 24-yard touchdown run made it 20-14 at 7:58 before Jalen White took a swing pass from Andrew Vince 25 yards down the left sideline for a 25-yard touchdown, giving  Souderton its first and only lead at 21-20 with 5:50 left in the first half.

“We have several really good backs and all of them took advantage of the opportunities they had tonight,” Gallagher said. “And DeAndre broke that one which was nice and Jalen was able to score on the little swing pass was nice.”

Big Red came close to forcing a three-and-out on the next NP series, but Zeltt hit a streaking Macnamara on a 3rd-and-9 from the Knights 37 and the Macnamara took it the rest of the way to put North Penn back up at 4:15.

After a Souderton punt, the Knights got inside the Indians five in the final seconds of the half but missed a 21-yard field goal.

Friday’s win was the 16th straight for North Penn over Souderton with the Indians’ last victory in the series coming in 1989.

Souderton looks to bounce back from its first loss with a nonconference matchup at Council Rock North Friday, which fell to 1-6 after losing to Abington 35-7.