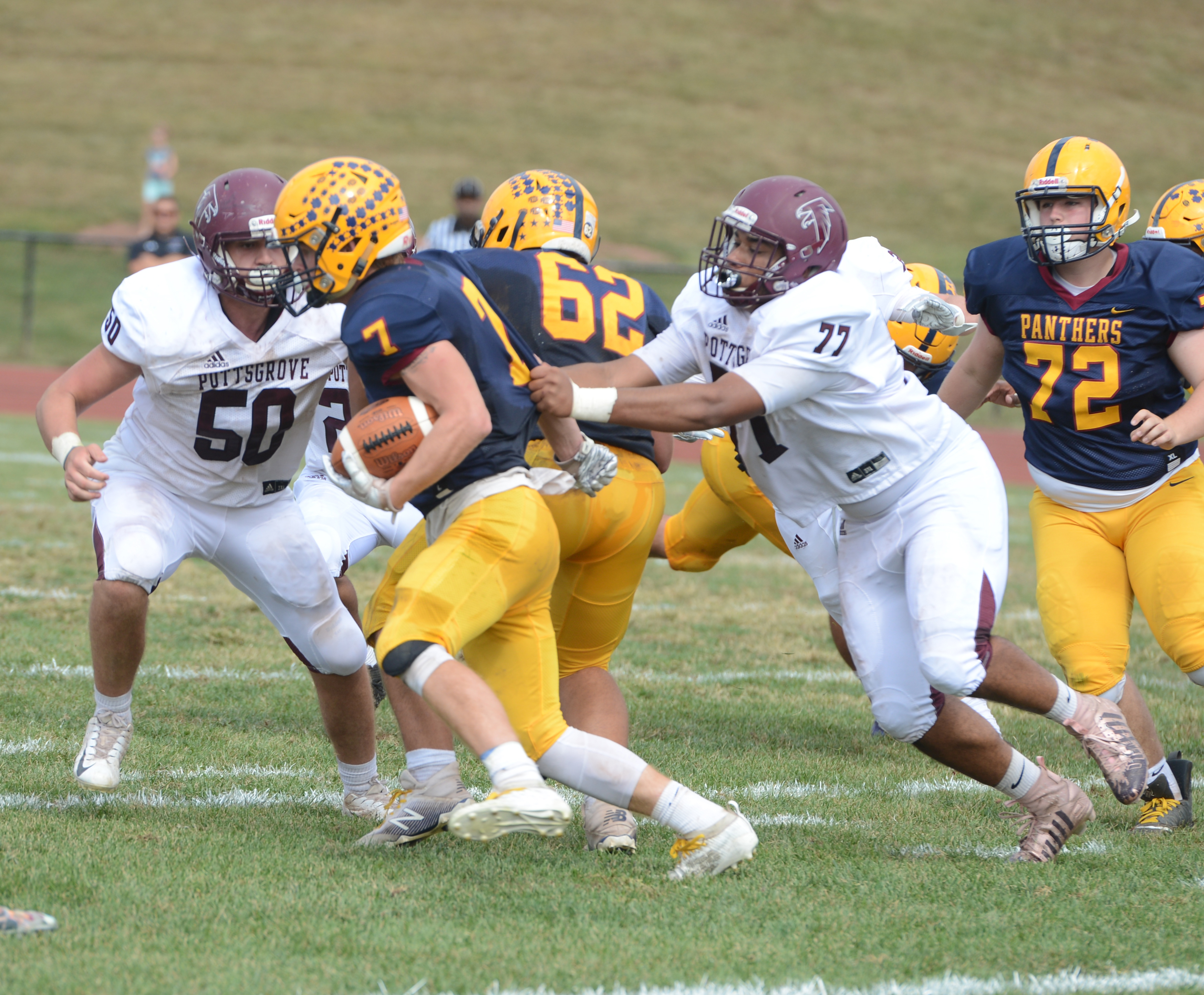 Isaiah Taylor rushed for 153 yards and all three scores for the Falcons (2-1 PAC, 3-4 overall) and Darrian Seaman recorded two sacks for Pottsgrove. Hunter Flack passed for 167 yards for the Indians (0-3, 1-6), including eight completions for 120 yards and a TD to Malachi Duka.

“Thankfully, our defense is playing pretty well,” said Falcon coach Bill Hawthorne. “Offensively, I need to go home and look at myself in the mirror.”

The Pottsgrove offense stuttered due to six fumbles, two of them lost, and an interception and gained only 171 total yards on the night. But the Falcons took advantage of favorable field position created by the defense to score one touchdown in each of the last three quarters.

The first came with 7:40 to go in the first half when Taylor ran seven yards into the end zone to complete a 10-play, 44-yard drive.

Upper Perk came right back with a long drive, aided by a Falcon penalty on a 4th-and-2 play and a pass interference infraction, but Rylee Howard intercepted a pass inside the Falcon five-yard line to protect the lead.

Then the Falcons fumbled on the next play and the Indians drove 19 yards, with Duka catching a 6-yard scoring pass from Flack to make it 7-6 with four seconds left in the half.

Pottsgrove scored on a 19-yard drive of its own midway through the third quarter to make it 14-6 after a sack by Seaman forced the Indians to punt from their own five.

Two more sacks by the Falcon defense kept the hosts from threatening in the second half. Then Flack intercepted a pass at the Upper Perk 12 with four minutes to go to keep the Indians within striking distance. But a big defensive play by Amir Brunson for a 7-yard loss led to a turnover on downs by the Indians and Taylor wrapped up the win with a 3-yard TD run with 50 seconds to go.

Upper Perk wound up with 132 total yards after being dropped for zero or negative yardage a total of 22 times.

“We’ve got a scrappy bunch of kids,” said Indian coach Tom Hontz. “We don’t have many guys and not many who are healthy, but we just kept scrapping and made a ballgame of it. When they (the Falcons) bring the heat, it’s tough sledding.

“Maybe we’ll get some bodies back. The next three weeks will be interesting. We’ll keep trying to get some wins under our belts.”

On the other hand, Hawthorne knows his team has to get better to compete successfully the rest of the season.

“Darrian Seaman, our freshman Amir Brunson and Taylor on offense and Kayden White on offense … I have kids who don’t quit and their effort is fantastic,” he said. “But penalties and turnovers … you’re not going to win too many games doing that. We’re just not doing the things we need to do to win football games. If we keep doing that, we’re going to have a tough time against Upper Merion next week.”