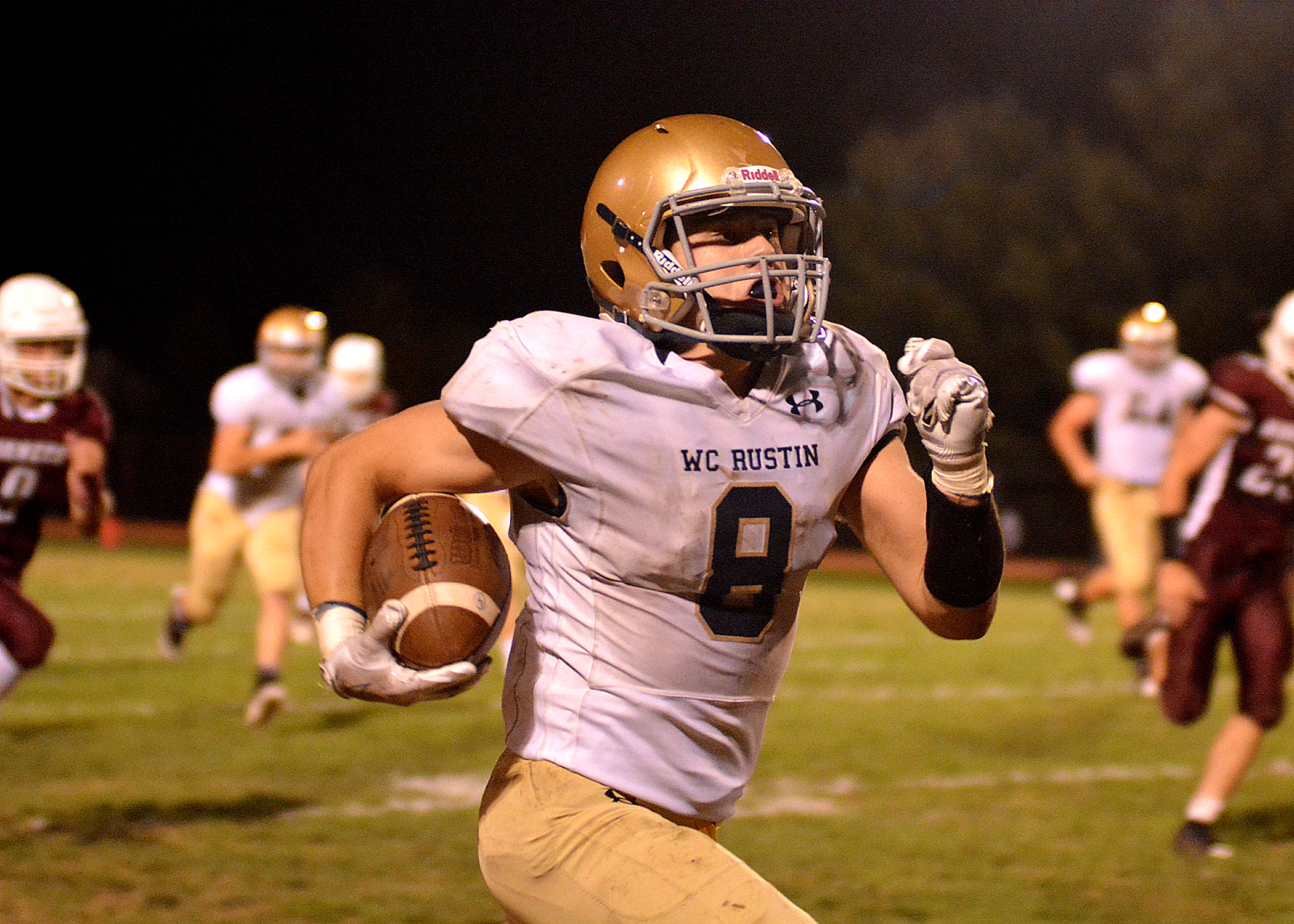 UPPER CHICHESTER — Chichester coach Bob Brice knew exactly what his Eagles were up against when West Chester Rustin visited Anthony Apichella Memorial Field Friday night. After all, Brice spent five seasons as an assistant with the Golden Knights under coach Mike St. Clair.

Even with that inherent knowledge, Rustin’s bruising rushing attacking and suffocating defense proved to be too much for Chichester to handle as the Golden Knights defeated the Eagles 28-6. Nevertheless, Brice recognized a spirited effort from his new team against his old team.

“Our defense really stepped up,” Brice said. “(Down) 14-6 halfway through the third quarter against a team like that, who has been to two district championships and has seven league championships in the Ches-Mont, is great. I think me knowing that side probably helped out a little bit, but I think our kids played tough. They’re really hard-nosed kids and they don’t back down from anybody.”

It took some time, but Rustin eventually broke through via a 45-yard run from Nick Madonna. That set up a five-yard rushing touchdown for Alex Pratzner. Not long afterward, Tommy Dougherty bulldozed through several Eagles (3-4) on his way to a seven-yard touchdown.

“It was a good fight going back and forth,” Pratzner said. “It was a good battle. We have the same offense, so it was a matter of who could be more physical.”

After Chichester temporarily cut the lead to 14-6 with a touchdown from Saeed Bradley, Pratzner came storming back for Rustin and torched the Eagles’ defense for an 80-yard touchdown run.

“They know us and we know them,” said St. Clair, whose team improved to 5-2. “Bobby called the offense for two years. (Chichester) did a very good job of flying to the football. They have tough kids and are a very tough team to play. We were lucky enough to hit a couple of big plays and then pull out a win.”

Pratzner later added his third touchdown of the game and finished the contest with 111 yards. The talented junior, whose role increased in the game after Madonna left with an injury, said the Golden Knights had to try and do things a little differently against Brice.

“Since they knew our offense and were going to try and counter us, we just added another step,” Pratzner said.

The Rustin defense proved to be staunch as well. The Golden Knights defensive unit limited Chichester to just 56 yards of total offense in the first half and 156 overall for the game.

For St. Clair, it was just the kind of effort that the veteran coach wanted to see from his team.

“I’m happy with the way the defense has been playing all year,” St. Clair said. “They get after the quarterback, they fly to the football. They’re schooled up in technique, and have really done a good job all year.”

Dougherty and Pratzner were also standout performers for the Golden Knights on defense, and had a lot of help from their friends there.

As for the Eagles, they will go back to the drawing board in preparation for the rest of Del Val League season, which includes remaining dates with Academy Park, Interboro, and Penn Wood. But the immediate concerns were reserved for Chi’s Kahsi Jones, who was stretchered off the field late in the game.

“They’re going to look after their brother,” Brice said of his players. “I told them to take the weekend to think about it, to look out for him, and to spend time with him if they can. We’ll start re-focusing on Monday. I’m sure they’re looking forward to it (the Del Val League schedule). Academy Park just beat Penn Wood, so they’re a very, very strong team and we’re going to have to refocus for them. Right now, I think (the Chi players) are just going to worry about their brother.”

Adams’ super night ‘gift’ to Strath Haven seniors
Spring-Ford turns it on in 2nd half, tears by Boyertown 55-20