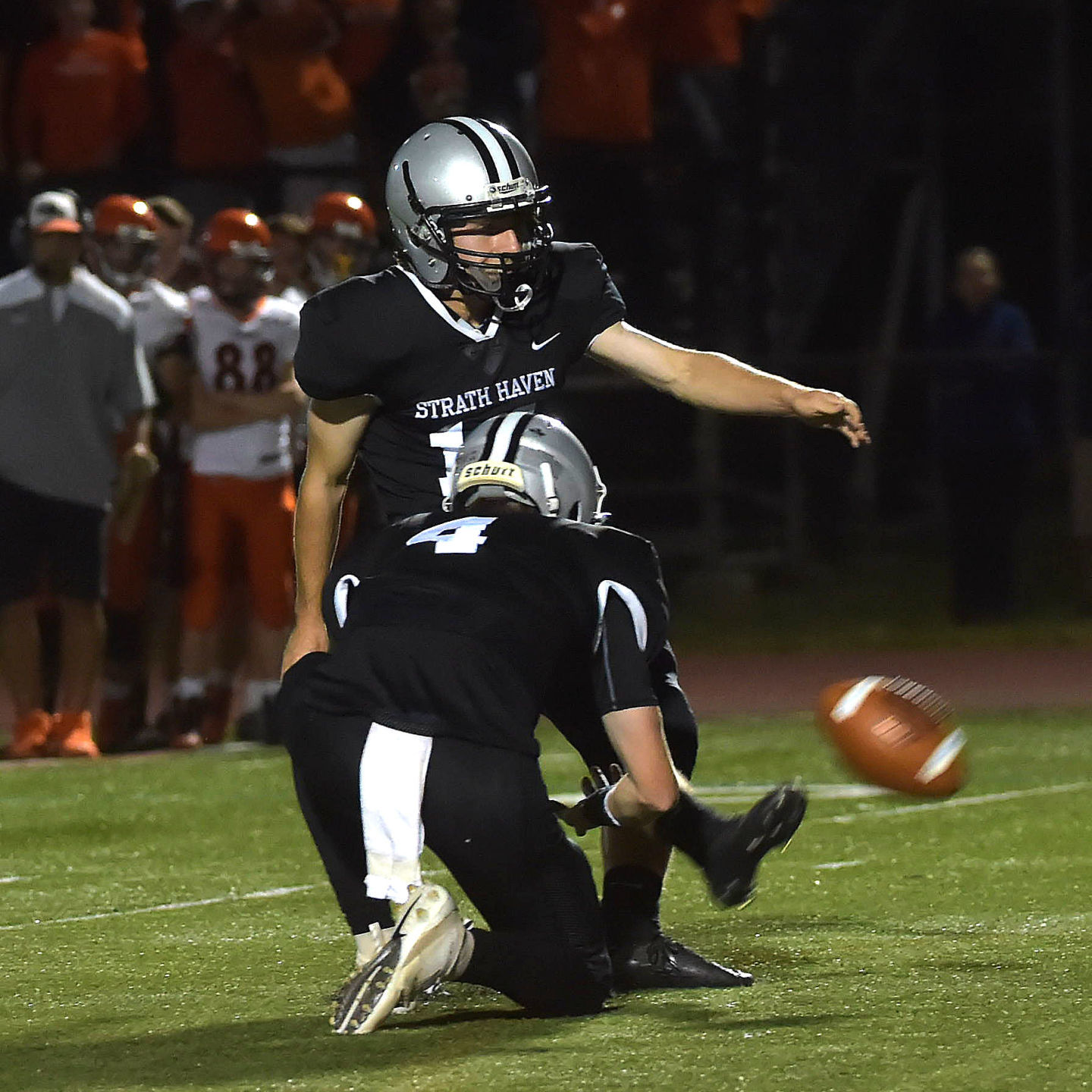 Strath Haven’s Emmet Young, here kicking a go-ahead field goal in a game with Marple Newtown last week, is raising funds for pediatric cancer research through his performance on the field this season. (Pete Bannan/MediaNews Group)

This year, the Strath Haven senior wanted his contributions to the football team to mean more than simply a few extra points on the scoreboard. So, Young put it upon himself to raise money for childhood cancer by creating a fundraiser with Kick It, which is a program of Alex’s Lemonade Stand Foundation, a national volunteer-driven effort focused on raising money for childhood cancer research.

“I’ve asked people to make a one-time donation or pledge an amount per point I make on behalf of Strath Haven football,” Young said. “Friends and family and the community have been very generous. Right now, each point I earn is worth $21 toward childhood cancer research. And many people have made one-time donations.”

Young’s expectations for this venture were modest at first, but he is constantly taken by surprise. He has far exceeded his initial goal of $1,500.

“My original goal … I thought was a stretch,” he said. “I have passed that goal in only four games and it seems possible that I could raise a lot more money if my fundraising campaign was better known.”

Those interested in helping Young’s cause can visit at alexslemonade.org/mypage/1814984.

Young has been a varsity standout all four years for the Panthers football and soccer teams. Last fall he helped Haven soccer advance to the PIAA Class 3A championship match. This year, the Panthers are the No. 1 team in the District 1 Class 3A rankings with a 6-5-1 record.

On the football side, Young, as a sophomore, kicked the winning field goal in a District 1 Class 5A first-round playoff game. This year he has connected on 22 of 23 extra-point attempts and has a 28-yard field goal.

“I was at a football kicking showcase in New Jersey and they brought it up, that’s it’s a great cause, and I knew it was something that I should do,” Young said. “Alex’s Lemonade Stand is a great cause, it’s fantastic. And, really, it’s just kicking. I’m doing what I love doing, and I’m helping out a great cause. I thought that would be a good thing to do.”

Young has always had what they call a big leg for a kicker. Even better, he has a big heart.

Despite the Patriots’ 3-3 record Johnson has been productive, albeit to a lesser extend than last season, when he often connected with wide receiver and 2018 Daily Times Player of the Year Kennedy Poles. Johnson leads the county with 1,233 yards and ranks fourth in passer efficiency rating (146.00). In addition, Johnson has run for 317 yards and seven TDs.

Academy Park senior Isaiah Rogers was named Del Val League Coaches’ Player of the Week for his excellent performance on the defensive line in the Knights’ 21-6 victory at Penn Wood.

MOVING THE CHAINS >> Antonio Rivera has given winless Sun Valley a boost in recent weeks. The junior wide receiver has six catches for 180 yards and two TDs over the last two games. … Interboro’s Sean Meyers ran for a season-high 55 yards in a loss to Unionville last week, marking the Bucs’ highest single-player rushing total since Week 2. … Penncrest’s Joseph Stanchek has averaged 6.7 yards per carry over his last three games. … Garnet Valley’s run offense is averaging a county-leading 305 yards per game. Strath Haven is ranked second with 266 yards per contest. … Defensively, no team has been better at stopping the run than Bonner-Prendergast, which has yielded a paltry 55.8 yards per contest. Chester (67.0) and Garnet Valley (69.7) are second and third, respectively. … Archbishop Carroll All-Delco Richie Kimmel was named Easternpafootball.com’s Catholic League Player of the Week. The senior linebacker racked up 17 tackles, including 12 solo stops, and one pass defense in the Patriots’ 27-23 win against Conwell-Egan. … Cardinal O’Hara’s run offense is averaging 2.1 yards per carry since the season opener when they gained 132 yards on 37 carries in a 17-13 win over Hudson (N.J.) Catholic. … James Welde averaged 12.4 yards per catch in Bonner-Prendie’s 40-14 rout of Lansdale Catholic last week. Welde has 14 receptions for 205 yards and four TDs this season.