Midseason review on the Mercury area’s surprises, stars and headline-makers 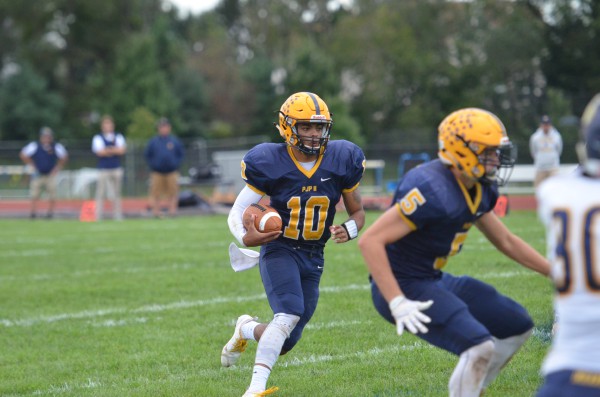 The beginning of league play this past weekend meant a new start for some area teams, and an opportunity to build on the success of non-league play for others.

But with five weeks in the books of a 10-game season, we have enough information to build an idea of where this season is heading. In the standings, the usual suspects seem primed to battle it out for PAC supremacy, with an upstart challenger here and there to keep things interesting.

So this week, we investigate the statistics and game logs to honor a few standout performers from the first half:

Surprising starters >> Owen J. Roberts and Pottstown took two different paths to early winning records. The Wildcats recovered from a disappointing finish to 2018 to start 4-0 before this past week’s heartbreaking 16-9 loss to Perkiomen Valley. Despite the defeat, with a 4-1 record the Wildcats stand poised to make a return to the District One Class 6A playoff field if they can take care of business in their remaining contests. An 8-2 record would make them virtual locks, and even a mark of 7-3 should have OJR on the right side of the bubble.

As for the Trojans, new coach Jeff Delaney has picked up right where predecessor Mark Fischer left off, leading Pottstown to a 3-2 start that has them right in the thick of the Class 4A playoff picture. With upcoming contests against Pope John Paul II, Phoenixville, and Upper Merion looming, the Trojans have limited margin for error in the coming weeks. Offensive Standouts >> Say what you will about strength of schedule, but there’s no denying the numbers submitted by Pope John Paul II’s quarterback Kamal Gray in the early going. The senior has completed 65 percent of his passes (62-of-96) for 1,058 yards passing and a gaudy 19 TD passes to only two interceptions. True, the Golden Panthers’ past several games haven’t required Gray’s services past halftime, but in a season-opening 47-46 loss to Roman Catholic, the QB went the distance, finishing with 430 passing yards and six scores (more on that below). He’ll get plenty of tests starting this week, as PJP – the lone 3A school in the PAC – battles Frontier division champion Pottsgrove on Saturday.

Dante Bonanni spent the first few weeks of the season rewriting the receiving record book at Spring-Ford. A pair of double-digit reception outings in nonleague play gave Bonanni the marks for catches in a game, catches in a career, and receiving yards in a career. With QB Ryan Engro continuing to fire away (59 percent completions, 1,404 pass yards, 12 TD/3 INT), odds are the prolific Spring-Ford duo isn’t finished making school history.

Defensive Standouts >> Spring-Ford’s Blake Terrizzi has been a consistent presence in opposing backfields early this season, racking up eight quarterback sacks in the first five contests. Terrizzi was particularly dominant in a week 4 win against Exeter, with four sacks and multiple QB hurries.

All questions about the youth of Perkiomen Valley’s defense were answered definitively Friday, as the Vikings held Owen J. Roberts under 200 total yards and forced a game-ending turnover at the goal line with under two minutes to play in a 16-9 victory. Nico Holder and Jacob Sterling caused the fumble, capping a dominant night up front, while Matt Brock and Randy Washington respectively lead an active group of linebackers and a secondary that repeatedly closed quickly, limiting yards-after-catch opportunities for the Wildcats. The Vikings’ defense made its bones during an arduous nonleague schedule, holding Downingtown East and Downingtown West to season lows in scoring.

Special Teams Standouts >> Two of the more versatile players in the area, Owen J. Roberts’ Cooper Chamberlain and Boyertown’s Jamie Moccia, make their presences felt not only on offense but in the special teams game. Chamberlain handles the place-kicking and punting duties at OJR and averaged over 40 yards per boot in a week 4 win over Upper Merion. Moccia recently extended a school record with his third career kickoff return of 90 yards or greater. Top Newcomers >> Upper Perkiomen sophomore RB Logan Simmon was poised to take top honors in this category after racking up 421 rushing yards and six scores in the Indians’ first two contests. A Week 3 injury, however, interrupted his breakout campaign. The Indians’ running game understandably hasn’t been the same without Simmon, held to only 67 yards in Friday’s loss to Pope John Paul II.

Pottstown freshman QB Joneil Oister has proven a quick study, leading the Trojans to their fast start. The highlight was his late score and two-point conversion to send Pottstown to a 14-13 win over Octorara in week one. Oister’s speed and athleticism were apparent immediately (7.4 yards per carry, 4 TDs) but his development in the passing game (52 percent completions, 355 yards, 4 TD/5 INT) has allowed Jeff Delaney to gradually expand the playbook each week.

Best Game >> Despite the outcome, there was no denying the excitement of Pope John Paul II’s season-opening 47-46 loss to Roman Catholic. The Golden Panthers roared to a 26-0 lead and appeared poised to withstand a late Roman charge before Cahillites QB Jayden Pope ran for a late 30-yard score and connected with Nadir McLeod for the decisive 46-yard score with under a minute to play.

The defeat seems to have lit a fire under the Golden Panthers’ defense, which hasn’t allowed a single point before the fourth quarter in their ensuing four contests. Isaiah Taylor gets a lead block from Jadore Colbert on a carry against Pottstown.

Around the Area >> After an early season dominated by passing/receiving headlines, the area’s top ballcarriers made their presences known this past Friday. Boyertown’s Moccia, Pottsgrove’s Isaiah Taylor, Spring-Ford’s Armante Haynes, and Daniel Boone’s Tanner Vanderslice all eclipsed the 200-yard mark Friday. Haynes needed only 16 carries to reach 221 yards, while Moccia and Taylor put the ball into the end zone a combined seven times for their squads (Moccia four, Taylor three.)

Led by Moccia’s 220-yard night, Boyertown’s offense enjoyed an overall breakout, rushing for over a quarter mile of offense (447 yards) in a 40-6 win over Methacton. Quarterback Mason Marinello contributed 128 yards rushing and two scores of his own, while the Bears’ defense intercepted Methacton quarterbacks four times.

Upper Merion’s Anthony Swenda remained the picture of consistency, going over 100 yards for the fourth consecutive contest as the Vikings topped Phoenixville, 21-14. Swenda has hammered his way to 542 rushing yards so far this year (second only to Pottsgrove’s Taylor in the PAC) and stands tied with the Pottsgrove back for the league lead with nine touchdowns. Perkiomen Valley’s duo of Jacob Sturm and Jon Moccia accounted for 241 total yards rushing and receiving as the Vikings survived the challenge from Owen J. Roberts. Each back was complimentary towards his sidekick after the game.

“With these big guys doing the work up front, it’s been about myself and Jon (Moccia) building the stamina to keep rolling, play after play,” said Sturm. “My opinion is that we haven’t reached our potential offensively.”

“I think Jon’s one of the best backs in the league, and it helps that defenses can’t completely focus on either of us.”

A Look Ahead >> Area fans will have to wait until Saturday for the highlight of this week’s slate, when Pottsgrove and Pope John Paul II meet in a Frontier Division showdown in Royersford. The victor will stand as the unofficial front-runner in the early division race. In three-plus years of the PAC’s divisional structure, Pottsgrove’s only loss in the Frontier came in 2016 when they fell to PJP II, 18-12.

Upper Merion will try to keep pace with Saturday’s winner in hosting Upper Perkiomen Friday night. Phoenixville and Pottstown meet at Grigg Memorial Field to round out the Frontier slate.

Owen J. Roberts celebrates its Homecoming and tries to bounce back against a resurgent Boyertown squad, while Spring-Ford and Perkiomen Valley each hit the road, traveling to Methacton and Norristown, respectively.

Daniel Boone and Reading High will meet at Albright College, while the Hill School heads to Chestnut Hill to battle Springside.

Lazer wings it, wins it for Bonner-Prendergast
DiGIOVANNI: Coatesville may not be quite the same, but doubt them at your own risk