Lazer wings it, wins it for Bonner-Prendergast 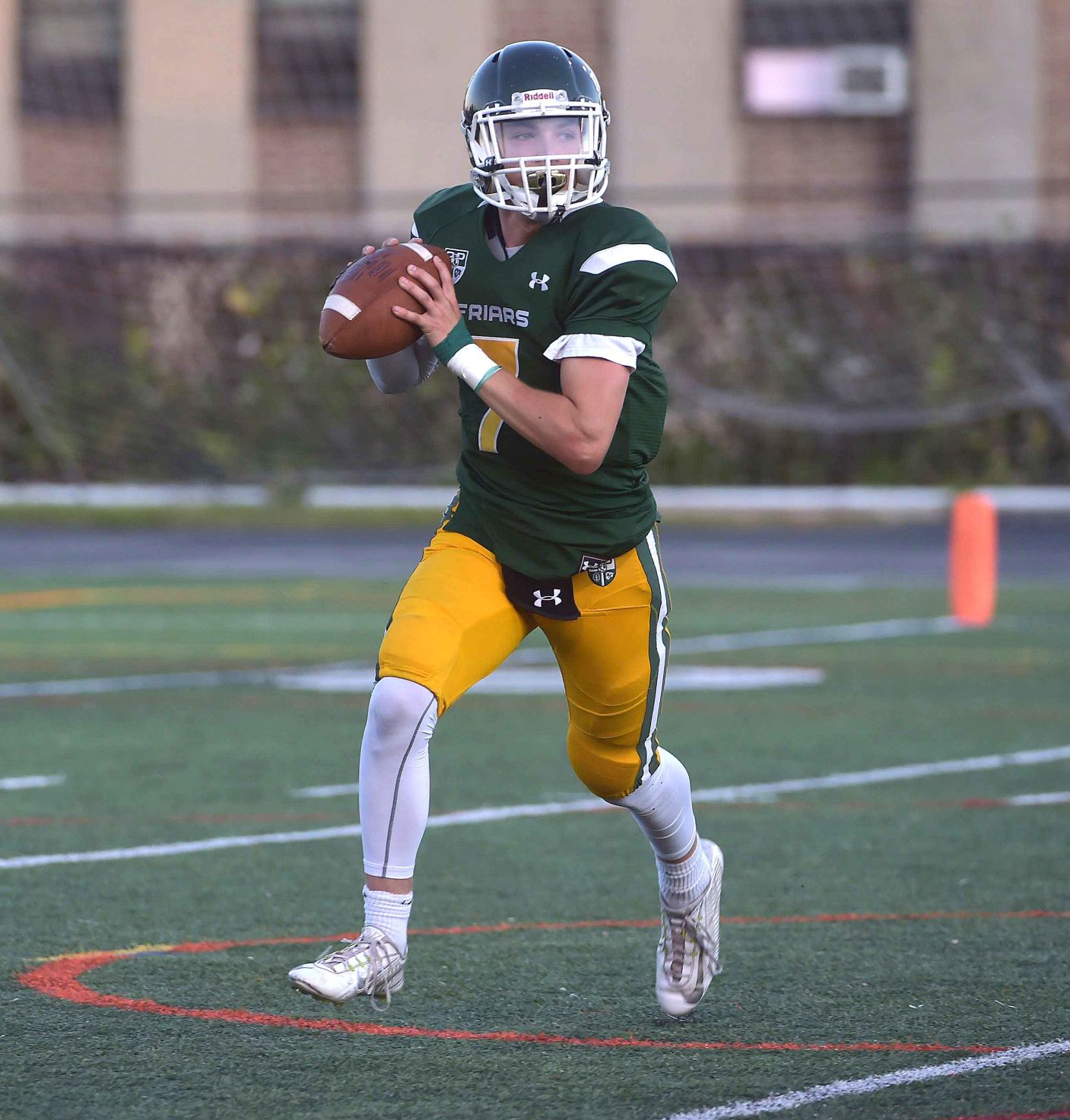 SPRINGFIELD TWP. — In one spectacular way, and then in one more subtle, Kyle Lazer followed the standard quarterback plan Saturday. He reacted properly to changes in circumstance.

“All I cared about,” the Bonner-Prendergast quarterback said, “was that we won.”

So it would be with his legs and with his tolerance that Lazer would boost the Friars to a 22-13 victory over host Bishop McDevitt at Springfield (Montco) High.

The dynamics of the game effectively requiring him to play in the first and third quarters, then to watch the second and fourth, Lazer provided a 55-yard touchdown run and 99 yards of total offense to help Bonner-Prendie even its Catholic League record at 1-1.

The touchdown, on the final play of the first quarter, was a keeper born from his scan of the Lancers’ defense. Later, his patience was a function of the Friars switching to their single-wing offense in the even-numbered quarters, requiring no quarterback at all.

“I’m perfectly fine with that, because it confuses the defense,” Lazer said. “Coming into the week, they had to prepare for both. If they think I am coming in, the ‘wing’ comes and it’s an easy first down every time. And you kind of can’t prepare for both of them. So if you are preparing for all ‘wing’ we’ll just hit you in the air or on the ground in our regular offense.”

Neither side was hitting much until Lazer sprinted out of the shotgun for his touchdown, and then added the PAT for a 7-0 lead.

“It was originally a trap to the left side,” he said. “But I saw the guy was blitzing to the left. So I knew it was just my opportunity to find an open hole.

“That open hole was all the way to the right and I found it.”

Once in the open, Lazer had a thought.

The Friars waited to unload that speed game, and with 1:42 before half, the single-wing attack keeping McDevitt backpedaling, sophomore Mason Peterson sprinted down the right side for a 38-yard touchdown.

“It was a two-wedge, and we were in the wing,” Peterson said. “I just hit the hole. I made one person miss. And I was gone.”

Though ahead by 14, the Friars were not yet clear. That was evident when, after a Bonner-Prendie offside penalty had re-set the structure, Joachim McElroy returned the second-half kickoff 92 yards for a touchdown. With Eric Wilson’s placement kick, the Bonner-Prendie lead had been shaved to seven points.

Inspired, the Lancers began to stir behind dangerous quarterback Lonnie Rice, who would twice hit Emmanuel Sia with long passes on a scoring drive capped by Sia’s 11-yard grab with 5:20 left in the third.

Its attention caught, Bonner-Prendie spent the fourth quarter back in the single-wing, at one point using a cavalcade of runners in an eight-minute, game-shortening drive. The reward was a one-yard TD run from Oscar Uduma with 32.5 seconds left. When Daniel Johnson hit Charles Ingram with a two-point conversion pass, the Friars had a two-possession lead, enough to bump its overall record to 3-1.

“We kind of see what we can get,” coach Jack Muldoon said. “We have a phenomenal quarterback in Kyle Lazer. We have some great skill guys. We have an offensive line that is kind of coming together. We wouldn’t run the single wing if it wasn’t successful. We did it against Upper Darby and were successful. We didn’t use it once against Avon Grove and we beat them. Last week (against Neumann-Goretti) we ran it one series and we scored.

“Today, we felt like we had to keep the ball out of Lonnie Rice’s hands. We know he can do anything on any play. So I don’t care what offense you’re running, if you can take eight minutes off a clock and score, it’s successful.”

Uduma was good for 104 total yards and Ayden Garnes made two interceptions for the Friars. The Lancers, who dipped to 2-3 and 1-1 in the Catholic League, enjoyed 158 total yards from Rice.

“They are a well-coached football team,” McDevitt coach Mike Watkins said. “They are tough as nails. We were prepared, but they did a better job today executing. Hats off to them. They won and we lost today.”

“You can’t do that and win football games,” Watkins said. “We returned the second-half kickoff, got a stop and had a little bit of life there. But you’ve got to play four quarters.”

Or, in the case of Kyle Lazer, sometimes two quarters can be plenty.