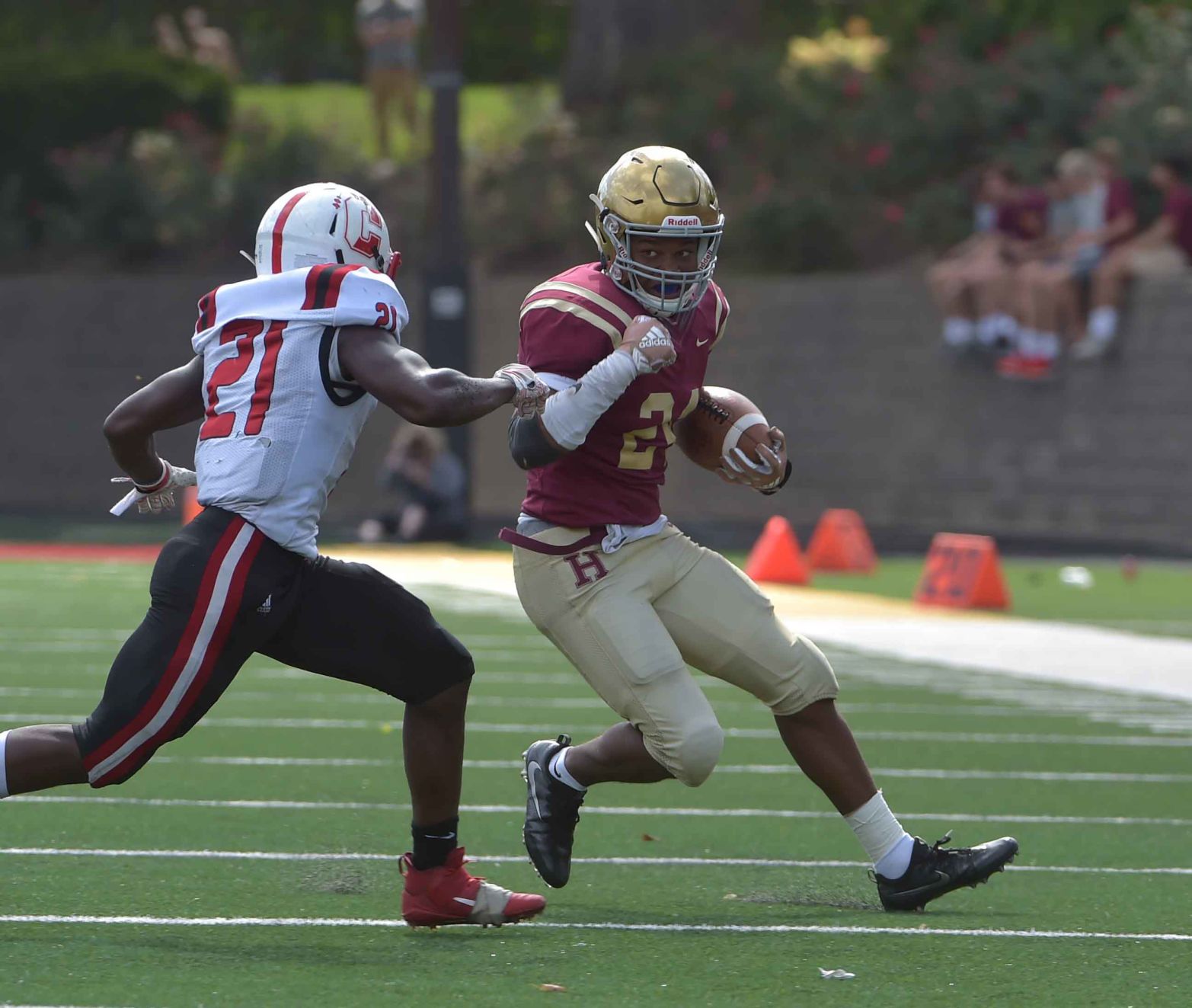 PHILADELPHIA — Daiyaan Hawkins, cradling the ball in his right arm, picked up his head and started looking further downfield. A speedy running back for The Haverford School, Hawkins forced himself to temporarily pump the brakes until his receiver had sealed the edge.

Then, a teammate barked, “Go!”

That was all the motivation Hawkins needed. The right sideline was his, and he was off en route to a 59-yard touchdown run that punctuated The Haverford School’s 30-10 win over Father Judge Friday night.

Hawkins and Mekhi Ajose-Williamson had two rushing touchdowns each for the Fords (2-2), who scored 20 unanswered points in the second half to break open what had been a deadlocked game at halftime.

“Our receiver (Kevin Thomas) had the corner for me where I knew I had the sideline. That’s all I needed,” Hawkins said, smiling widely.

An every-down cornerback on defense, Hawkins has been getting more and more touches on offense with each passing week. An injury to teammate and fellow ball-carrier Samir Gardner ensured Hawkins that he would be more involved on the offensive side of the ball.

“We’re just cycling through backs right now,” said Hawkins, who had seven carries for 92 yards. “I was the next man up.”

The Haverford School, buoyed by those four rushing touchdowns, counted on its defense, too, in dispatching a tough opponent in Father Judge. The Fords forced two turnovers on downs in the fourth quarter.

The game’s biggest play, however, had nothing to do with The Haverford School.

Set to punt from just across midfield, Father Judge sailed the snap to its punter. The loose ball resulted in a net loss of 30 yards and positioned The Haverford School at the Crusaders’ 27-yard line. At the time, the game was knotted at 10-all. Three plays later, Ajose-Williamson (15 carries, 111 yards) scored from 13 yards out.

“We capitalized on it,” said Haverford School coach Mike Murphy. “That’s, to me, a sign that we’re growing. We sensed they were down, punched it in, and kept on going. We’ve had those kinds of snaps, too. I’m happy with how we jumped on that.”

Added Fords safety Pat Toal: “That was a huge momentum-changer for us. It pushed them back and gave us hope.”

All game, Father Judge (1-4) looked amiss on offense. The Crusaders played without their regular starting quarterback, Aidan Dooley, who suffered a shoulder injury in a loss last weekend at Germantown Academy. The Haverford School assumed Father Judge, with Dooley off the field, might opt for the run on most occasions.

The Fords guessed correctly. The Crusaders’ Damier Johnson carried 34 times for 192 yards and a touchdown. He accounted for more than two-thirds of Father Judge’s offense, when factoring in his two receptions for 16 yards.

“It’s a run-heavy offense right now,” Johnson said. “I’ve got faith in my quarterback (Mike Van Horn). As long as we show up to perform next week, we’ll be all right.”

Ultimately, Judge’s offense got too predictable.

“They were going unbalanced left, unbalanced right,” Toal said. “They were playing the numbers against us. We adjusted at halftime, shifted things over and were able to change how things went.”

The Fords’ tweaks to their defense paid off. They kept Johnson to 62 yards rushing in the second half, as opposed to 130 through the first two quarters. Additionally, the Fords cut down two of the Crusaders’ fourth-quarter drives with critical stops on fourth down.

“They were throwing the same stuff at us in the first half and we weren’t adjusting,” Hawkins said. “Once we got down what they were doing, the game changed.”