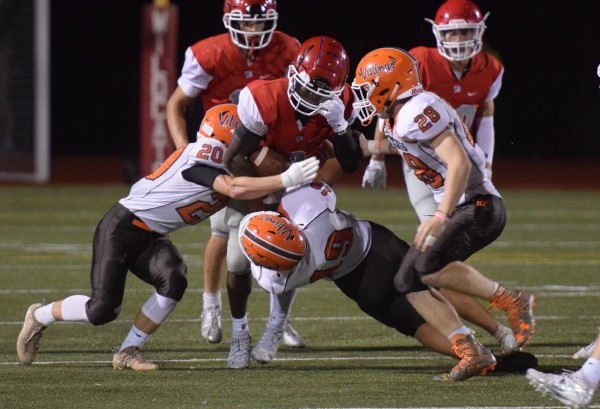 “We play them either way,” he said of the league champion Perkiomen Valley Vikings. “Might as well start off the (conference) season with them.”

On Friday night, Kolka’s Wildcats – ranked No. 6 in District 1 Class 6A and the lone undefeated team in the Pioneer Athletic Conference – will face off with the league’s standard bearers for the past three seasons at Thomas J. Keenan Stadium.

For OJR (4-0), the key to maintaining its unblemished record lies in finding ways to ask questions the Perk Valley defense is unprepared to answer. That will be easier said than done.

A 2-2 start to the season isn’t what Vikings coach Rob Heist had in mind for the 2019 season, but he takes comfort in knowing that PV’s nonleague schedule prepared the squad for just about anything it will see the rest of the way. The Vikings’ losses came against Downingtown East and Downingtown West, two of the top three teams in District 1, and the contests gave their young defense experience against a power running game and a high-octane passing attack respectively. Victories against Avon Grove and Pennridge only served to further their development.

“We gave up a few big plays that resulted in more points and higher overall yardage than we’d prefer,” admitted Heist after last week’s Downingtown West game. “But we played pretty tough against one of the most prolific offenses in the state this year.”

If OJR can’t match Downingtown West in terms of pure firepower – and few teams can – its best hope may lie in the versatility of the Wildcats’ attack. Dual-threat QB Cooper Chamberlain finds himself in the Top 5 among area passers (57 percent completions, 542 yards, 6 TD/2 INT) and the Top 10 in area rushing yardage (5.1 yards per carry, 241 yards, 4 TD) through the early season, and last week he found a reliable sidekick in senior RB Josh Jackson, who dashed for 135 yards and three scores in the Wildcats’ win over Upper Merion.

The duo showed strong cohesion in the option game, as Chamberlain’s accurate reads and willingness to take a big hit opened running lanes for Jackson in the running back’s best career outing. If the defense overplays the backfield tandem, Chamberlain can look to Dante DeNardo or Jon Hannevig, both among the area’s top 10 pass-catching targets.

How does PV slow the Wildcats? Defensive lineman Jacob Sterling has stood out on the defensive line and offers the potential for consistent disruption of the Wildcats’ rhythm. A linebacking group led by senior Matt Brock will be responsible for fulfilling their assignments against the multi-faceted offense.

For the Vikings, sophomore QB Ethan Kohler performed admirably against Downingtown West, going 22-for-32 for 298 yards and a pair of scores and distributing his targets amongst five receivers. Two of them are the Vikings’ running back combo of senior Jacob Sturm and Jon Moccia, who promise to punish any defense who’s overly focused on the passing game. Randy Washington, Logan Holloway, and Mike Dougherty offer the Vikings depth at receiver.

Kohler will need to make good decisions and avoid OJR’s ball-hawking duo of Hannevig and Matt Cutrone, tied with Spring-Ford’s Mason Brill for the league lead in interceptions with three apiece.

Special teams are also Chamberlain’s forte, as he handles the placekicking and punting duties quite ably for OJR, while Coach Heist lauded the improvement of Perkiomen Valley’s special teams units over the past couple of games.

Last Meeting >> The Falcons topped Pottstown twice last year, including a 40-6 victory in the District 1 Class 4A championship game.

Preview >> Less than two miles separate these two Frontier Division rivals, but it’s been a while since the schools have been similarly close on the football field. But last year’s District championship game, while won decisively by the Falcons, brought a new dimension to the rivalry, and a hot start to this season has the squad in position to potentially secure their first victory over Pottsgrove since 2002.

For his part, Trojans coach Jeff Delaney is keeping his squad grounded. “Pottsgrove’s record is not an indication of their team,” he said. “They’ve played a tough schedule, and we know their speed and physicality will have us in for a battle.”

Pottstown freshman QB Joneil Oister had his best passing performance in last week’s win over Methacton, completing 8-of-9 passes for 126 yards and a score. More than 100 of the yards and the touchdown went to Jahzeel Watson, who Delaney mentioned as a key contributor on both sides.

For Pottsgrove, a win over their cross-town rivals would go a long way towards erasing the bad taste left by the 1-3 start to 2019. Despite a loss to Christ the King (NY) last week, coach Bill Hawthorne was pleased with the continued development of junior safeties Rylee Howard and Justin Westcoat. The leadership of seniors Joe Silvestri, Darrian Seaman, and Evan White has helped maintain the focus of the Falcons as they attempt to start anew this week in league play. Hawthorne singled out White for “playing his heart out” on both sides of the ball.

“We can put him anywhere,” the coach said, “and feel certain that he’s going to give us 110 percent.”

Preview >> It’s been a slow start for an Eagles team still trying to find their footing in coach Joe Milligan’s second year. Zion Malone went over 100 yards rushing in last week’s contest against Cheltenham, but a tie game at halftime got away from the Eagles late, as Cheltenham took a 48-14 decision.

Things don’t get much easier for the Eagles defense as they face prolific Spring-Ford, featuring area-leading QB Ryan Engro (58 percent completions, 1,237 yards, 10 TD/3 INT) and WR Dante Bonanni (30 receptions, 477 yards, 2 TDs). Despite the big passing number, coach Chad Brubaker wants to see the Rams focus on putting together a full, four-quarter performance on offense as well as special teams. The Spring-Ford defense was a bright spot in last week’s 24-7 win over Exeter, led by this season’s breakout defensive player Blake Terrizzi, who has eight sacks on the season.

Preview >> The Golden Panthers look to continue their run of dominance since Week 1’s loss to Roman Catholic in a 47-46 shootout. PJP has run off three consecutive victories by a cumulative score of 135-13, led by QB Kamal Gray (63 percent completions, 849 yards passing, 14 TD/2 INT.) Andrew McDonald emerged as a possible answer at running back in last week’s win over Schuylkill Valley, carrying for 110 yards and two touchdowns. Coach Rory Graver’s challenge to his defense after that opening loss has been answered in resounding fashion, with senior Matt Dobrowlowski leading a unit that hasn’t surrendered a point before the fourth quarter in the past three games.

QB Hunter Flack continues to show improvement for an undermanned Upper Perkiomen squad that found a breakout performer in sophomore RB Logan Simmon, only to see him go down in Week 3 with an injury. Now down their top two running backs, the onus is on Flack and the passing game, featuring WRs Trey Robinson and Andrew Carducci, to see if they can solve the resurgent Golden Panthers’ defense.

Preview >> Phoenixville coach Don Grinstead is pleased with the performance of his defense to this point but says the size of Upper Merion will be a challenge this week. Running behind all that size is arguably the strongest RB tandem in the PAC in Anthony Swenda and Ty Lobban. In a battle of two teams that like to establish the run, defensive linemen such as Phoenixville’s Matt Johnson and Brady Aselton will be key to limiting Upper Merion’s effectiveness.

Preview >> While Justin Carfrey (17 carries, 115 yards) filled in admirably for the injured Mike Torcini last week, the rest of the Methacton offense was unable to muster much of an attack in a loss to Pottstown. This week, the Warriors try their hand against a similarly struggling Boyertown defense, which allowed 40+ points for the second straight week in a loss to Berks Catholic.

The reeling Blazers come in off their third consecutive loss last week at the hands of Conrad Weiser. “We’ve started off slowly,” said coach Rob Flowers, “and as this season gets to its midpoint, I am looking to develop an identity.”

Doing so against undefeated Fleetwood would make quite a statement. The Tigers bested Upper Perkiomen, 30-20 last week, and are off to their best start in years. Senior RB Christian Moreno accounted for 200 total yards (149 rushing, 51 receiving) in the victory.

A pair of narrow losses to start 2019 have the Rams’ backs against the wall as they face the undefeated Churchmen of Episcopal Academy. Coach Jeff Hollway hopes to have starting QB Zayid Aziz, who missed last week’s game against Academy of the New Church, back in time to face EA, who comes off an impressive win against Philadelphia Public League contender Northeast High.