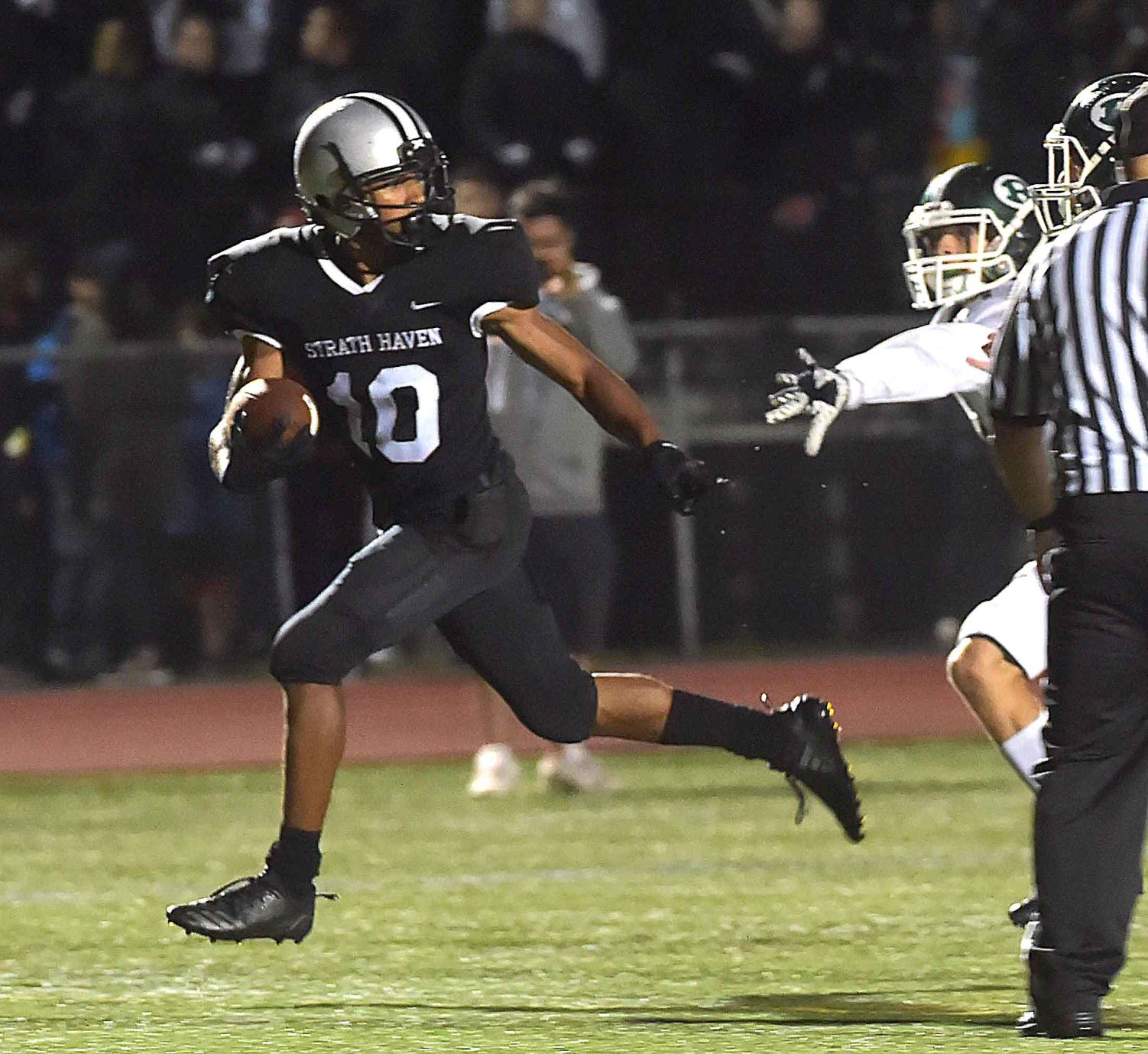 You could say what’s old is new again at Strath Haven.

Jim Connor was a longtime lieutenant of Clancy’s during Strath Haven’s run of dominance in the 1990s and early 2000s. Mike Connor (Jim’s son) and Jones helped the program capture district titles in their heyday. Jones played two seasons in the NFL.

Veteran staffers Dan Shaffer and Erik Hollingsworth also have been instrumental to the Panthers’ early success this season.

“The staff has meshed real well. I even have Jim back coaching the offensive line, which is a huge help,” Clancy said. “There were discussions back and forth with those guys in the offseason. We all wanted to make sure we were all compatible with each other and it’s worked out great. … I remember talking about this in the spring and the way it’s working out now is the way I hoped it would work out when we were discussing it in the spring. Those guys, both Connors and Jones and everyone on my staff, are all really smart guys and really good football coaches. I feel pretty fortunate, to tell you the truth.”

With a 4-0 record, the Panthers sit atop the Central League in a three-way tie with Garnet Valley and Marple Newtown.

You could say those fresh faces – to this generation of football talent in the Wallingford-Swarthmore School District, anyhow – have been major influences on the program.

“Our new coaches have been great and they have helped everyone on the team become better players,” senior linebacker John Wilson said earlier this season.

The Panthers are one of five remaining undefeated teams in Delco.

When Episcopal Academy tight end Joe Graham tried to make a miraculous catch in last week’s win over Northeast High, he hurt his neck and had to leave the game. After the game, EA coach Todd Fairlie said he’ll be OK.

However, Graham’s injury left Episcopal without two middle linebackers in their game last week. Graham had already been filling in for someone else, so to say the Churchmen were shorthanded would be an understatement.

In Graham’s place, EA put Ben Kovacs, the team’s center, at middle linebacker as a stopgap solution. Fairlie scrapped that plan because he didn’t want his center to be an every-down player. Instead, the Churchmen transitioned to a 4-down front. Fairlie said it’s in their system on defense, but required buy-in from his players. It worked.

Academy Park would take a few more games like last Friday’s, when its defense and special teams made a slew of big plays to take the pressure off the offense.

While the offense scored all but one of the TDs, it didn’t have to expend too much energy punching the ball across the goal line.

“Our defense gave us a short field and so did our special teams, so they should get a hats-off,” coach Jason Vosheski said. “Any time you can get a short field … that helps. We should be able to score and if we don’t then we’re not doing our jobs.”

AP’s quick-strike offense doesn’t grind out long drives very often, so if there’s an area the Knights could improve on, it could be time of possession, especially when in close games.  Work the clock, wear the defense down.

“The only thing that scares me is, when we’re tested and we’re not getting a short field and we have to drive the ball, are we going to be able to do it?” Vosheski said.

Well, the Knights may have to answer that question Friday night when they travel to West Virginia powerhouse Martinsburg. The Bulldogs have claimed seven of the last nine Class 3A state championships.

Nevertheless, Vosheski has been pleased  first-year starting quarterback Barry Brown, who has been one of the top dual threats in Delco, and an offensive line that continues to improve.

While the Knights haven’t needed to rely too heavily on their offense, it’s averaging a cool 330 yards per game. Brown has carried the torch with 413 passing yards and 412 rushing yards, the fourth-most in the county.

Nick Bates was somewhat of a renaissance man for Episcopal last week.

The senior had an interception in the second quarter and, on the next play with EA’s offense on the field, he pulled down a 38-yard catch from Maurcus McDaniel that ultimately set up McDaniel’s touchdown as time expired in the second quarter. Bates also had two extra points.

MOVING THE CHAINS >> Archbishop Carroll’s Russell Minor-Shaw is the only quarterback in Delco to have completed at least 10 passes in his first four games. The senior is 55 of 97 for 739 yards and seven touchdowns with a QB rating of 138.33, which is fifth best in the county … Cardinal O’Hara is looking for a serious boost offensively following back-to-back shutouts losses. In their last two games the Lions are averaging 138 yards of total offense … Marple Newtown’s Charlie Box has done just about everything. He has two interception returns for touchdowns to go with seven rushing scores and one TD catch…Haverford’s run offense has produced 598 yards on 61 carries (9.8 ypc) with 11 touchdowns in their previous two games, which were wins over Penncrest and Interboro by a combined score of 90-7 …