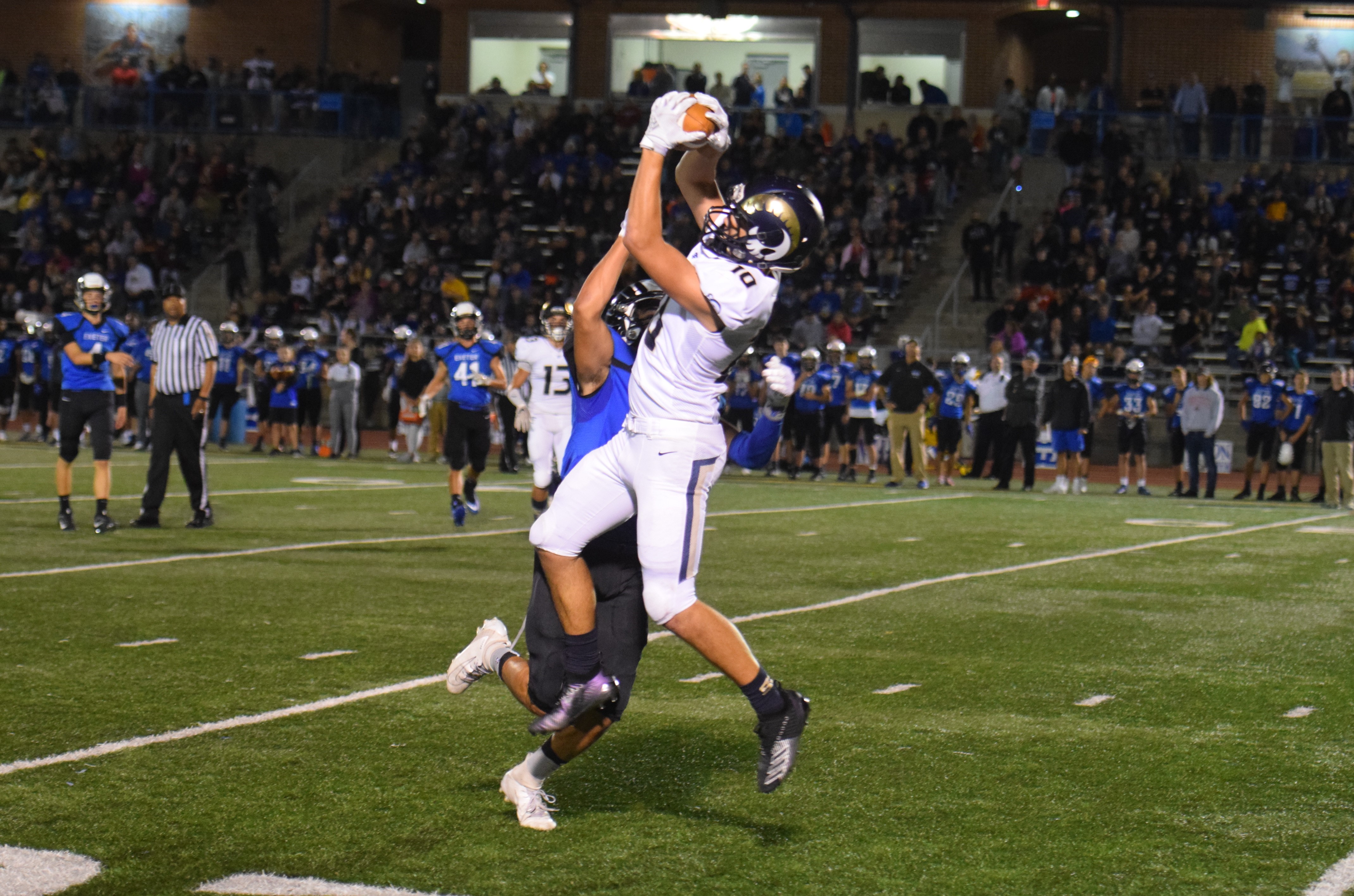 LEESPORT >> Kamal Gray threw four touchdown passes in the first half as Pope John Paul raced to a big lead on the way to a 52-7 non-league victory Friday over Schuylkill Valley.

The Golden Panthers (3-1) scored five first-quarter touchdowns as senior tailback Andrew McDonald scored on an 8-yard run and a 19-yard reception. McDonald added another 40-yard touchdown reception and a 58-yard scoring run to finish with four touchdowns and 169 total yards.

Schuylkill Valley quarterback Nico Iaccarino entered the game as the Berks leader in passing yards, but was held in check by Pope John Paul’s athletic secondary. He completed just 3-of-21 passes for 15 yards and was intercepted three times.

The first of those interceptions was returned 31 yards for a touchdown by freshman defensive back John Beach to give the Golden Panthers a 14-0 lead less than three minutes into the game.

From there, Gray’s accurate passing often set up his receivers for big runs after the catch. Gray threw for 184 yards as Pope John Paul outgained Schuylkill Valley 425-134. Engro, who was 23-for-39 passing, shredded a defense that had only given up 32 passing yards and 20 points all season before Friday.

Engro connected with James Albert on a fourth-and-8 for a 19-yard completion, setting up an Armante Haynes 1-yard punch-in that put the Rams up 7-0 late in the first quarter.

That drive was set up by Exeter’s first big mistake, a fumble on a punt return that gave Spring-Ford the ball back at the Exeter 25.

The Eagles (2-2) were on the verge of tying it up midway through the second after driving to the Spring-Ford 10, but a grounding call on Gavin McCusker pushed the Eagles back to the 33. A Josh Cupitt 49-yard field goal try fell just short. Spring-Ford (2-2) answered with a field goal of its own to move ahead 10-0, then took over at the Exeter 29 with 95 seconds left in the half after an errant Eagles punt. Three plays later, Engro found B.J. Beard for a 10-yard touchdown pass.

On the ensuing kickoff, Devon Scott brought Exeter back to life, albeit briefly. He initially dropped the ball, but picked it up in time to race through the Rams coverage for a 97-yard return touchdown that brought Exeter’s deficit back to 10.

But with 1:09 still remaining in the half, Engro needed just three plays – a pass interference call and completions of 29 and 28 yards – to get the Rams back into the end zone.

The Rams’ defense allowed little in the second half, keeping the Eagles off the board for a 17-point win.

Spring-Ford opens Pioneer Athletic Conference play next week with a visit from Norristown.

READING >> Christian Cacchione had four receptions for 106 yards and two touchdowns and also intercepted a pass to lead Berks Catholic over Boyertown 49-14 in a non-league game Friday night at the Forino Sports Complex.

The Saints (2-2) amassed 412 yards of offense, including 79 rushing yards and two scores from Connor Gundersen.

The Berks Catholic defense surrendered only 14 yards and zero first downs through the first half. The Bears (1-3) finally found their footing late in the third quarter, capping a 13-play, 72 yard drive with a 22-yard touchdown run by Jaime Moccia.

“Coming in off two lopsided losses, we asked the kids to fix their errors this week and they did that,” Saints Coach Rick Keeley said following the game. “We had a total team effort tonight.”

Two of Berks Catholic’s main offensive weapons, Abdul McFoy and Nolan Larkin, did not play due to injury. However, that didn’t stop the Saints from executing their system, nor did it stop their sophomore flanker.

“I’m just glad they called my number,” said Cacchione while holding the night’s game ball. “Brad (Hoffman) was able to find me in places I could catch the ball.”

Berks Catholic quarterback Brad Hoffman completed 6-of-10 passes for 116 yards and two touchdowns for the Saints and was able to get the offense moving after a sluggish start. Hoffman found Cacchione to open the scoring and Gundersen extended the lead with a 30-yard score on the Saints’ next possession.

As efficient as Berks Catholic was on offense, it was nearly as dominant on defense, holding the Bears without a first down until midway through the third quarter. The Saints’ secondary also held Boyertown to zero completions on six attempts.

The Bears got their first points on a 22-yard Jamison Moccia TD run. The Bears also got 44 yards and a touchdown from Joseph Dulin and 42 hard-earned yards from Zachary Davis.

BIRDSBORO >> Conrad Weiser parlayed their 30-point outburst in last week’s second-half comeback win over Elizabethtown into their most complete performance of the season Friday night in a 38-7 Berks Football League Section 1 victory over Daniel Boone in Birdsboro.

Sophomore Logan Klitsch got his second start at quarterback for the Scouts (1-0, 2-2) and looked very comfortable controlling the offense. He went 5-for-9 for 79 yards and did most of his damage outside of the pocket.

Weiser led 17-0 and took possession at the Daniel Boone 21 after Dalton Moyer recovered a fumble. Moyer called a play that had Klitsch roll right. After directing some traffic, he hit Dautrich for an 18-yard touchdown.

Moyer had a 48-yard touchdown run as he went untouched to the end zone and was able to show some of his speed.

Weiser’s defense got into the scoring column when Aanjay Feliciano jumped an out route and returned the interception for a touchdown late in the third quarter to make it 38-0 and invoke the mercy rule.

The Blazers (0-1, 1-3) came into the contest with the most turnovers committed in the county and added three more to bring their total to 12 in just four games. They struggled with some snaps and on the mesh point on some of their handoffs.

Tanner Vanderslice scored for the Blazers on a 2-yard touchdown run that was set up by a 56-yard Dominic Nave reception.