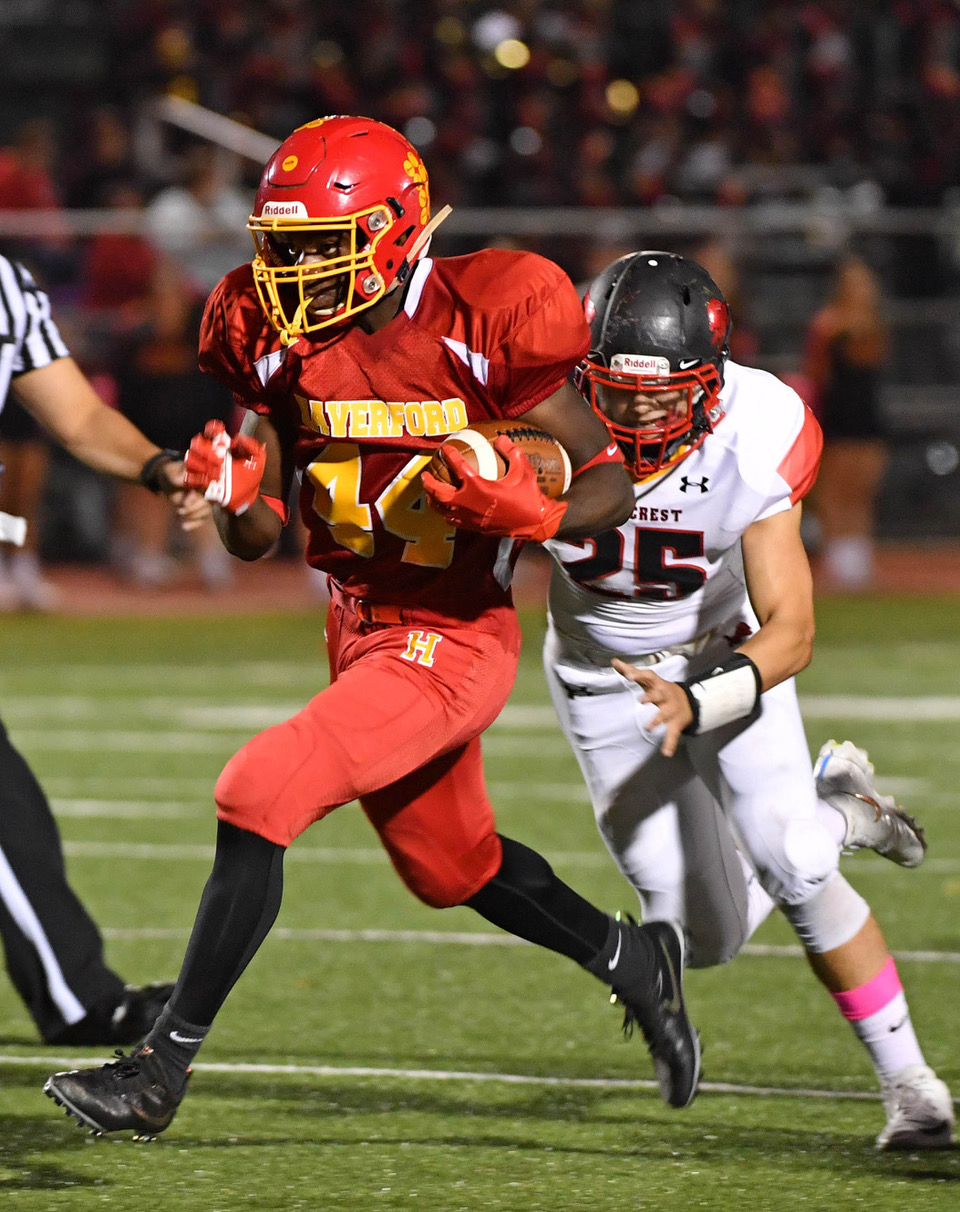 Haverford running back Chasen Wint (44) races past Penncrest linebacker Anthony Chelo on a 32-yard touchdown run during last year's game between the teams. (Special to the Times/ERIC HARTLINE)

MIDDLETOWN — With a 42-0 Central League win over Penncrest Friday night, Haverford finally had something to celebrate following an 0-2 start to the season. So the Fords did. As coach Joe Gallagher addressed his victorious group, Chasen Wint grabbed a pair of pom-poms from the nearby cheerleaders and started to dance. Gallagher paused his speech to laugh before going on.

Haverford earned a moment of light-heartedness, especially after the Fords’ narrow 35-28 defeat to Central League titans Garnet Valley a week ago. They put that defeat in the past and rolled out to a 35-0 halftime lead against the Lions, a needed reset on their 2019 campaign.

“We play ourselves each week. We try to get better. We look at the film. We improve technically, physically and add effort,” Wint said. “That’s how we go about it. Doesn’t matter who we’re playing. We’re always playing Haverford.”

The Fords (1-2 overall, 1-1 Central League) got off to a fast start, forcing and recovering a fumble on Penncrest’s opening drive. Wint turned the takeaway into six points. He needed two rushes to get into the end zone.

It was virtually the same story on the next touchdown. Aiden O’Neill picked off Nick Chelo’s pass then four players later, Haverford found paydirt. This time, Shane Mosley completed the short drive.

The result was all but sealed with 3:25 to play in the first quarter when Wint bullied his way across the goal line for his second score of the evening.

“Come out on fire,” Wint said of the Fords’ preparation. “Set the tone for the game.”

Mosley added his second touchdown on a 17-yard scamper in the second quarter before Tommy Caruso closed the first-half scoring by returning a blocked punt 12 yards.

Nevermind the score. Forget the shorthanded opponent (Penncrest was missing key players on both sides of the ball to injuries). There were elements of the Haverford offense that make the Fords contenders each year.

Wint carried the ball 14 times for 53 yards, Mosley seven for 69. Quarterback Trey Blair completed four of his five throws for 33 yards and added 62 more on the ground. Jimmy Callahan made sure the backups influenced the boxscore when he went around the left side for a 28-yard touchdown in the fourth quarter. The Fords may not be back, so to speak, but they are in a better place than they were prior to visiting the Lions.

Penncrest (1-2, 0-2) had its moments, too. The highlight came early in the second quarter when the Lions, at their own 20, snuffed out Haverford on fourth-and-three to turn the Fords over on downs.

“Our team, we build off all the momentum we can get,” Penncrest wide receiver and safety Kevin Mills said. “When we get one stop, we try to compound it.”

The payoff may come next week, when the Lions take on winless Lower Merion.