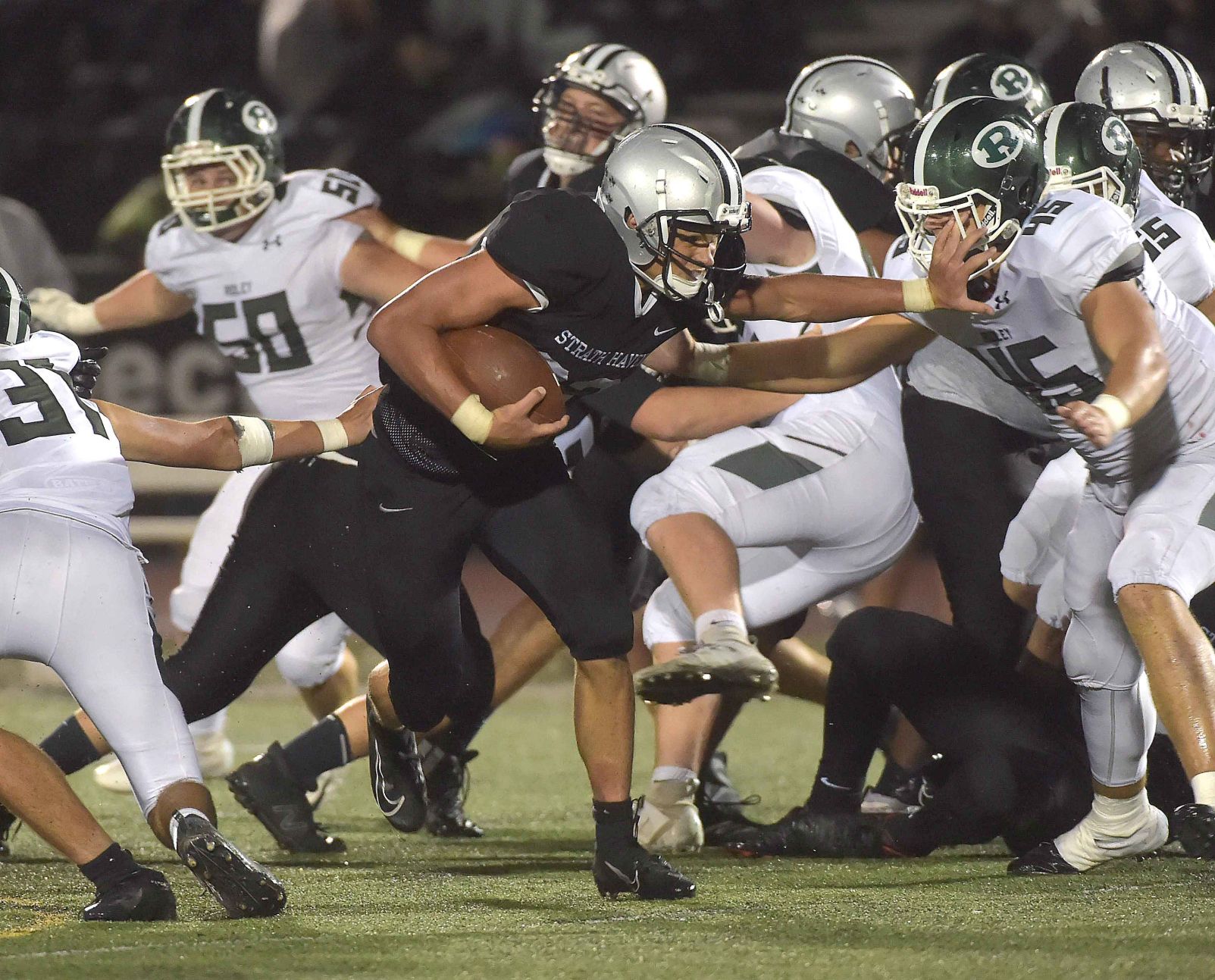 Strath Haven's John Prochniak smashes through the Ridley line on this third quarter run Friday night. The Panthers ran over and away from Ridley all night. (PETE BANNAN/MEDIANEWS GROUP)

NETHER PROVIDENCE — On a night Strath Haven paid tribute to its 1999 PIAA championship team, the 2019 edition faced a Ridley team it hadn’t beaten in 15 years.

“We were fired up all day at school,” big lineman Sam Burk Jr. said. “We know this was a big week for us and it was a big night for the 1999 championship team. …”

So why not put on a show, right?

“There was a little pressure, but I think we do well under pressure,” Burk said. “That’s why we were successful tonight.”

The Panthers were not only successful. That would be a tame description of what transpired at George L. King Field Friday night. Strath Haven bested Ridley in all facets of the game en route to a 49-13 win.

It was a shellacking.

“We’re a family and we stick together, and in a big game like this, we were ready to play,” said senior linebacker John Wilson, who has been at the forefront of Haven’s domination on defense. “We wanted to get them back, too. We were winning at halftime last year and then they put a number on us in the second half. We knew that we can trust each other and we have these new coaches who know a lot about defense and have been helping us out. We knew that Ridley was a team that was beatable.”

Strath Haven’s Ibo Pio looks backs as he leaves Ridley defenders in the dust on this 21-yard touchdown play in the fourth quarter. (PETE BANNAN/MEDIANEWS GROUP)

Wilson and the Strath Haven defense held Ridley’s run-first offensive attack to 3.8 yards per carry. Any play that went east-and-west resulted in very little positive yardage. The Panthers’ best asset defensively is speed and ability to flock to the ball and gang tackle.

“It started all week just being disciplined, knowing your job and doing your job to be able to beat a team like that,” Wilson said. “One of the new philosophies … is to get two people at the ball at every time. We don’t want them to break our wall. Too many times last year we gave up a lot of big plays and it cost us. Everyone is just flying to the ball and that starts in practice. Our coaches would snap on us if we don’t. It’s our mindset.”

After three celebratory weeks of tail-smacking every team in sight, Strath Haven’s defense is allowing nine points per game and opposing offenses have managed 163 yards. Most of that offense is accrued in junk time after Haven has the win well in hand. In general, the Haven defense is a throwback. There is beef on the line and athletes the linebackers are athletic, fast and tough to contain. Mostly everyone plays both ways, and John Prochniak and Ibo Pio have been the standouts.

Prochniak, the fullback/linebacker, had his third consecutive three-touchdown game. He ran for 130 yards on 15 carries. At times he carried multiple Ridley defenders on his back.

“We just all say to each other, do your job. That’s all we have to do to be successful,” Prochniak said. “Right now we’re all doing the right things and we’re picking each other up.”

Pio, who doubles as a safety, is the lightning to Prochniak’s thunder. The speedy senior ran for 145 yards and two scores on 13 carries.

“We have three or four running backs who are doing a great job,” Wilson said. “Prochniak is the power and Pio is shifty and has the chance to do it all. We can trust any one of them. … Coach Clancy preaches 11-step blocks, to stay on your blocks for 11 steps and through the echo of the whistle. When it’s man-on-man, there is a lot of room to run.”

Strath Haven and Ridley exchanged three-and-outs to begin the night. But when the Panthers went to work offensively for a second time, they took off.

Evan Blake ran a reverse 18 yards and Pio scampered 17 yards to the Ridley 3-yard line. One play later, Prochniak bulldozed his way across the goal line to give the Panthers a 7-0 lead. Pio’s first touchdown was a 22-yard run with one second to play in the opening quarter to make it 14-0.

Ridley’s best drive of the game chewed up nearly six minutes of clock in the second quarter. Malachi Williams dove into the end zone from a yard out to trim the Green Raiders’ deficit to 14-6.

But Strath Haven’s quick-strike offense answered on the very next play from the line of scrimmage. Once again it was Prochniak, who broke several tackles on the way to a 58-yard dash to the end zone.

Quarterback Jack Grace was in the middle of engineering another impressive Ridley (2-1, 1-1 Central League) drive late in the half before throwing an interception inside the red zone. Haven defensive back Matt Shuler did the honors.

Three plays later, the Panthers (3-0, 2-0 Central League) returned to the end zone. Prochniak broke off an 11-yard run with 39 seconds to go before the half, pushing the Panthers’ lead to 28-6.

In addition to 100-plus-yard rushing performances by Pio and Prochniak, Evan Blake added 54 yards on the ground. Strath Haven is averaging 49 points per game after three weeks.

“They totally dominated us in all three phases and did a great job,” Ridley coach Dave Wood said. “We weren’t ready to play. Give all the credit to Coach Clancy and those guys, they did a tremendous job.”

Strath Haven snapped a 10-game skid against Ridley and is off to a 3-0 start for the first time since 2009. Yeah, these retro Panthers are having a lot of fun.

“I said before that this is the biggest game I’ll ever play in my life,” Wilson said. “It was a blast tonight.”