Johnson plays it safe, then gets defensive as Penn Wood hangs on 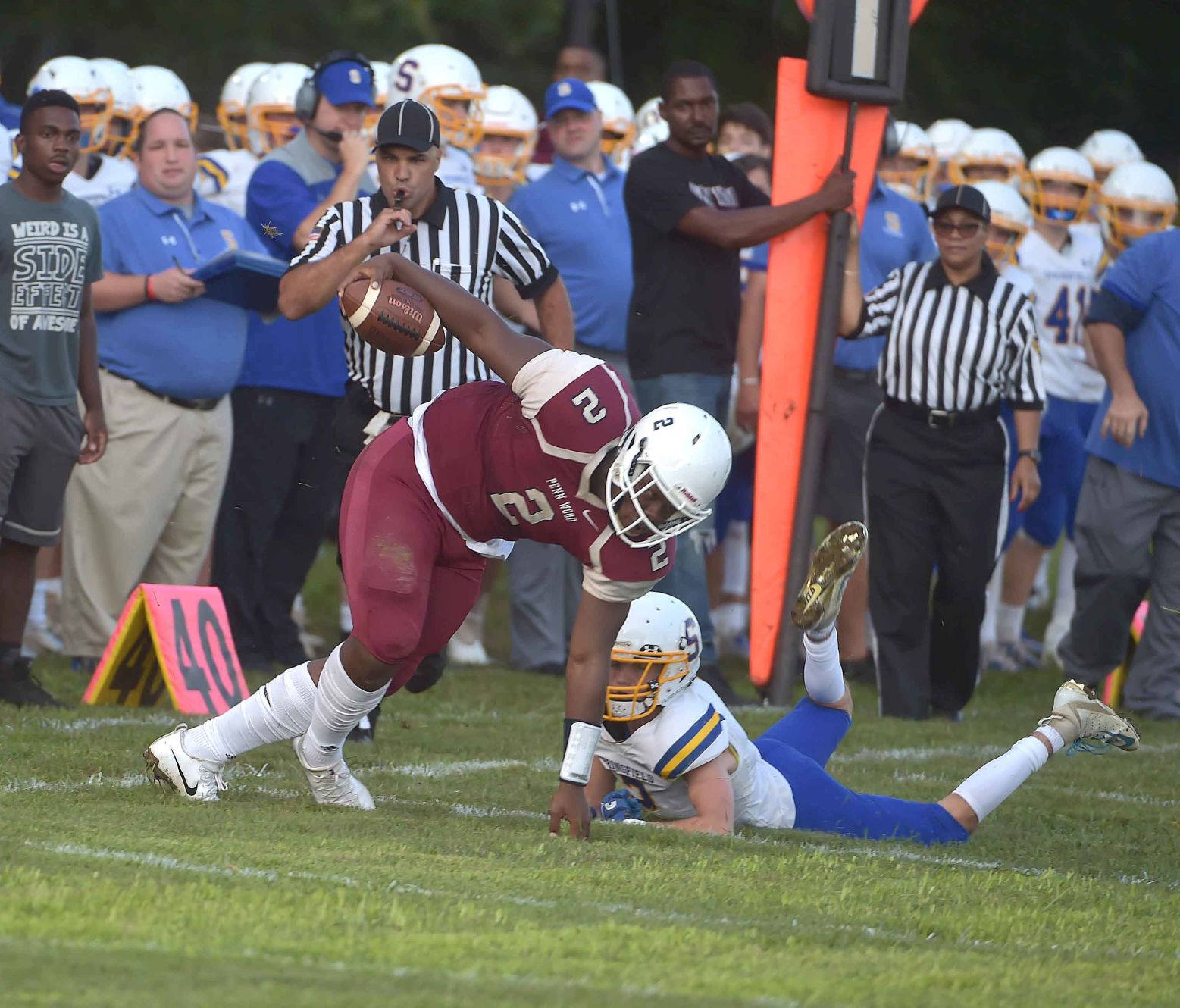 Desman Johnson avoids a tackle in Penn Wood's win last week against Springfield. The All-Delco quarterback finished 9-for-22 with 160 yards and two touchdowns in the Patriots' 38-35 win at Pennsbury Friday.

First, with his team buried on its side of the field, Patriots coach Ato Troop opted against a punt and instead called for Johnson to intentionally kneel in the end zone. The safety narrowed Penn Wood’s lead to only three points.

Next, Johnson did what he hadn’t done since his freshman year: He walked onto the field to play defense.

“I knew I was next up, as soon as I saw (defensive end Christian Suber) go down,” Johnson said, grinning.

Johnson racked up with touchdowns (two on the ground, two through the air) to go with 241 yards of total offense. He finished 9-for-22 with 160 yards and passing scores to Ameen Stevens and Jordin Jones. The All-Delco also scored on runs of seven and 30 yards.

Penn Wood (2-0) looked well positioned to hold the ball and run out the final 3:39, after the Patriots’ Mike Price picked off Hensor late in the fourth quarter. Pennsbury’s defense, coupled with a costly holding penalty, pushed Penn Wood to its 5-yard line — and to consider the unthinkable. That’s when Johnson, under Troop’s direction, took a snap out of the shotgun, drifted to his right, and absorbed a tackle from three Pennsbury linemen for a safety.

The Falcons got the ball with 51 seconds to go and only 41 yards to cover. Suber pulled up with a leg cramp after the first play, bringing Johnson onto the field for a surprise cameo on defense.

“We knew he’d get a good rush,” Doegan said of Johnson, who lined up at defensive end.

Final: Penn Wood 38, Pennsbury 33. Lots—and lots—of offense in this one.

But it was the Patriots’ defense, and Daniel Doegan’s INT, that gets them to 2-0. pic.twitter.com/e8eHr4ArQH

“We’re very well prepared,” Doegan said, still clutching the game ball that he intercepted. “The coaches have us prepared for anything to happen. I just put my technique in and undercut the ball.”

Penn Wood’s defense turned up the pressure significantly in the second half. The Falcons gashed the Patriots for 219 yards rushing on 34 first-half carries, a 6.4-yard average per rush. After halftime, Pennsbury managed only 71 yards on 19 carries.

Stevens contributed perhaps the best all-around game for Penn Wood. The multi-purpose player helped the Patriots snuff out a Pennsbury drive inside the 5-yard line by recovering a fumble forced by Robert Dahn. Stevens also brought down a touchdown pass from Johnson just prior to halftime and sealed the right edge with a crucial block to spring Jones for a 30-yard scoring run.

“They’ve got me playing everywhere so I can learn any position and fill in,” Stevens said. “I just know how to play at so many different spots. It paid off.”

Speaking of playing multiple positions, Johnson said he’d be more than willing to take additional snaps on defense, if the situation calls for it.

“I work on some stuff on the side,” the quarterback quipped. “It was fun.”

The final score made sure of that.