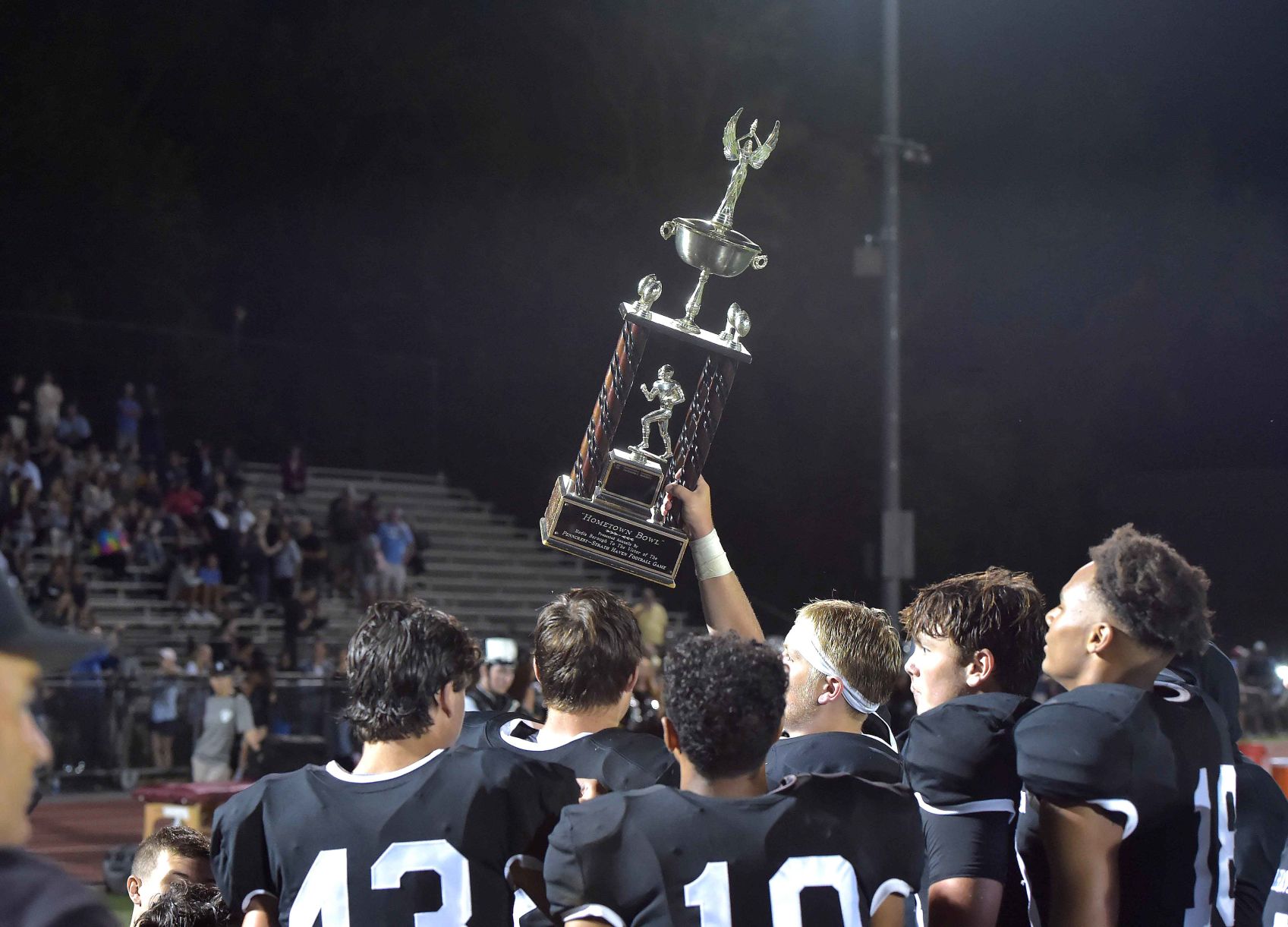 Strath Haven is once again owner of the Hometown Trophy after defeating Penncrest 56-0 Thursday evening. The trophy is presented to the winner of the game every year by Media Borough. (PETE BANNAN – MEDIANEWS GROUP)

NETHER PROVIDENCE — John Prochniak knew he would get the ball more often this year, but he wasn’t expecting to make it look so easy.

“It’s all because of the offensive line,” Prochniak said. “The blocking was great and I just did the rest. They set me up great and I was able to run free and get those touchdowns.”

All three of Prochniak’s carries resulted in scores for the Panthers, who are 2-0 for the first time since 2011. Haven has defeated Interboro and Penncrest by a combined score of 98-14.

Not bad for a senior-laden team that appears to have all the tools to make a run in the Central League and District 1 Class 5A tournament.

“We’re just playing with a lot of confidence,” Prochniak said, “and everyone is really trusting each other.”

Strath Haven reached the end zone seven times in the first half. To underscore the offense’s dominance, the Panthers called only 11 plays in the opening two quarters. The rebuilding Lions (1-1), who were coming off an impressive road win against Wissahickon last week, were no match for a Panthers squad that means business in 2019.

Prochniak scored on Haven’s first play at the line of scrimmage, and when he wasn’t running untouched to the end zone, he was leading the charge at linebacker.

Penncrest managed only 15 yards of total offense in the first half. After halftime, Haven called upon its second-and third-string players to complete the shutout.

“Our attitude has been great,” Prochniak said. “We want to come out and score the ball … and we’re going to come out hitting hard. A lot of teams may not like that, so …”

So … maybe the rest of the Central League should take notice of the Panthers.

All of Haven’s top players go both ways on offense and defense. When Ibo Pio wasn’t roaming the defensive secondary, he ran the ball three times for 85 yards, including a 65-yard jaunt to the end zone late in the first half.

Junior running back/defensive back Jaris Adams put on a show, too. His first touchdown was a punishing blow from 11 yards out to put the Panthers ahead by four scores. Adams lowered his shoulder and ran over a Penncrest defense on the way to the end zone. The Daily Times’ video of his touchdown was shared on social media by @MaxPreps … so you could say Adams was Twitter-famous for one night.

Later in the quarter, Adams made a big play on the defensive side. He read quarterback Jimmy Cage like a book, stepped in front of the route and picked off a pass for a 26-yard interception return for a touchdown.

“Just want to help my team win,” he said.

Jack Ryder, the Panthers’ first-year starting quarterback, had only two opportunities to show off his strong arm but made both passing attempts count.

First he connected with Chris Willette on a beautiful wheel route for 43 yards, then in the second quarter, he threw a perfect ball to Blake for a 49-yard score.

“That was our post-wheel concept and I was actually kind of a little off-balance, the kid kind of hit me at the end,” Ryder said. “Fortunately I just floated it in there and Evan did the rest.”

Ryder reached into his bag of car metaphors to describe the Panthers’ fast start.

“I guess our mentality is to get on the pedal early and stay on them,” Ryder said. “We know we can keep the gas running.”

Sophomore Isaiah Freeman’s QB sneak from a yard out capped the scoring for the Panthers with nine minutes left in regulation. The sun also rose for junior Alex Hemingway, who came off the bench to run for 33 yards on four