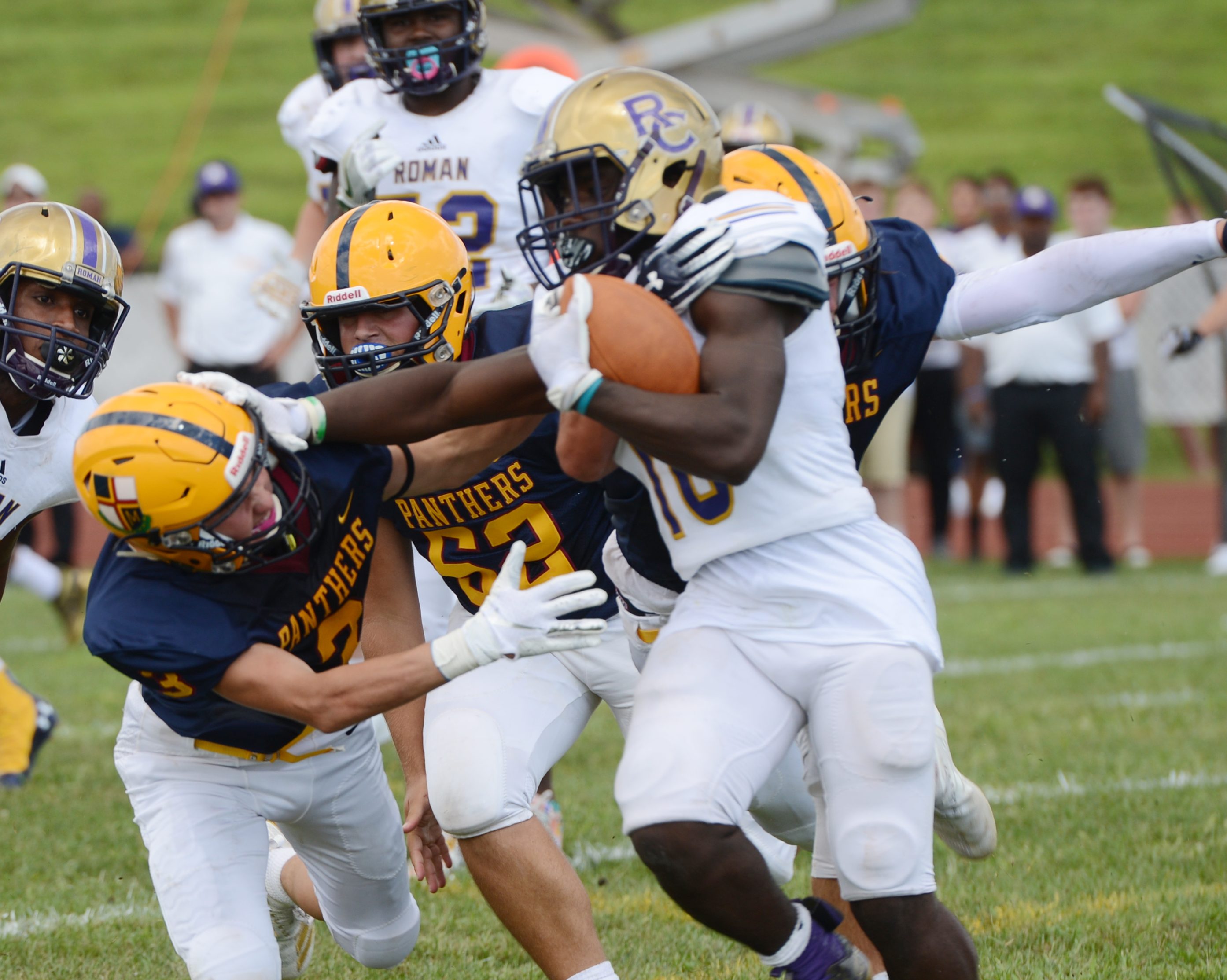 UPPER PROVIDENCE >> Both teams learned valuable lessons about themselves in Saturday’s game.
Roman Catholic discovered it has the gumption and ability to overcome an early point deficit topping the two-dozen mark. And Pope John Paul realized it can’t ride a lead — no matter how big — to victory.

Roman staged a surprising comeback in this non-league season opener at PJP, working back from a 26-point deficit for a stunning 47-46 victory. The Golden Panthers, who were in charge for almost 46-1/2 minutes, ultimately found themselves needing to pull off a last-ditch drive to salvage the day … a comeback that never came to fruition.

“I didn’t,” RC head coach Rick Prete said about believing his players could rally for victory. “Our culture has been about overcoming adversity, being mentally and physically tough.

“Going on the road to play a good program like PJP, I told the kids something like this could happen. The measure of them is how they responded.”

The Panthers rode Kamal Gray’s strong throwing arm to their unanswered early point spread. It started on the first play from scrimmage, when PJP’s senior signal-caller hooked up with Andrew McDonald on a 60-yard scoring pass 16 seconds in, and it continued through Gray finding Justin Mitala on a 47-yard TD connection 2:59 before the end of the first quarter.

In-between, Gray and Dylan Walker collaborated on a 41-yard play, and McDonald caught a five-yard sideline pass for a second TD. Visions of a mercy-rule finish for PJP took root from that flurry of offensive excellence.

“I just told the guys to weather the storm, that we were more physical,” Prete said. “That helped us overcome.”

Gray did his level best to lead PJP to victory. He threw for six touchdowns, hitting Walker and Justin Kormos in the third and fourth quarters, respectively, and completing 19 of 30 passes for a whopping 430 yards.

His touchdown toss to Kormos in the first minute of the fourth quarter proved particularly timely, giving the Panthers a double-digit (46-35) lead after the Cahillites whittled it down to three. But after Roman took the lead with 1:17 left, its defense sacked Gray twice and forced him into a pair of incompletions to close out the game.

“You can’t say enough about Kamal,” PJP head coach Rory Graver said. “You want him out there leading the team in a game like this.”

RC’s counter to Gray’s prolific throwing arm was its own quarterback, Jayden Pope. The lanky junior got his team untracked with touchdown passes to Nadir McLeod and Elijah Steward at the end of a three-TD first half, then scrambled 46 yards for the go-ahead score.

“Jayden is a cool as it gets,” Prete said. “He’s confident and respectful … the reason we were able to pull it off.”
PJP had another touchdown not attributable to Gray’s arm, but its special teams. Forcing the Cahillites to punt from their 15 with 6:41 left in the first half, John Mattiola got a hand in to block Ryan Flaherty’s kick. Mitala scooped up the ball and ran it back in the end zone to give the Panthers a 32-7 lead at that point.

The Pope’s standouts on the defensive side included Kormos and Steve Skarbek, who picked Pope off on successive series near the midpoint of the fourth quarter; and Mattiola, who recovered a fumbled kickoff to Roman to set the stage for the Panthers’ third TD.

Ambrose Culloroi added a sack of Pope early in the third quarter, the lone time in the game Pope was dropped for a loss.

“At times our defense played well,” Graver said. “We still have to shore up some stuff.”

“I’m proud of the guys’ effort,” Graver said. “This is something we can build on. We can learn from this, playing against a (PIAA Class) 6A team.”

NOTES >> Though it made conversions on only two of its seven TDs, Pope John Paul wasn’t far behind the Cahillites on PATs. The visitors had three conversion kicks by Flaherty and one two-point pass by Pope; the Panthers’ extra points were a run by Chris Bruder and Gray-to-Walker pass.