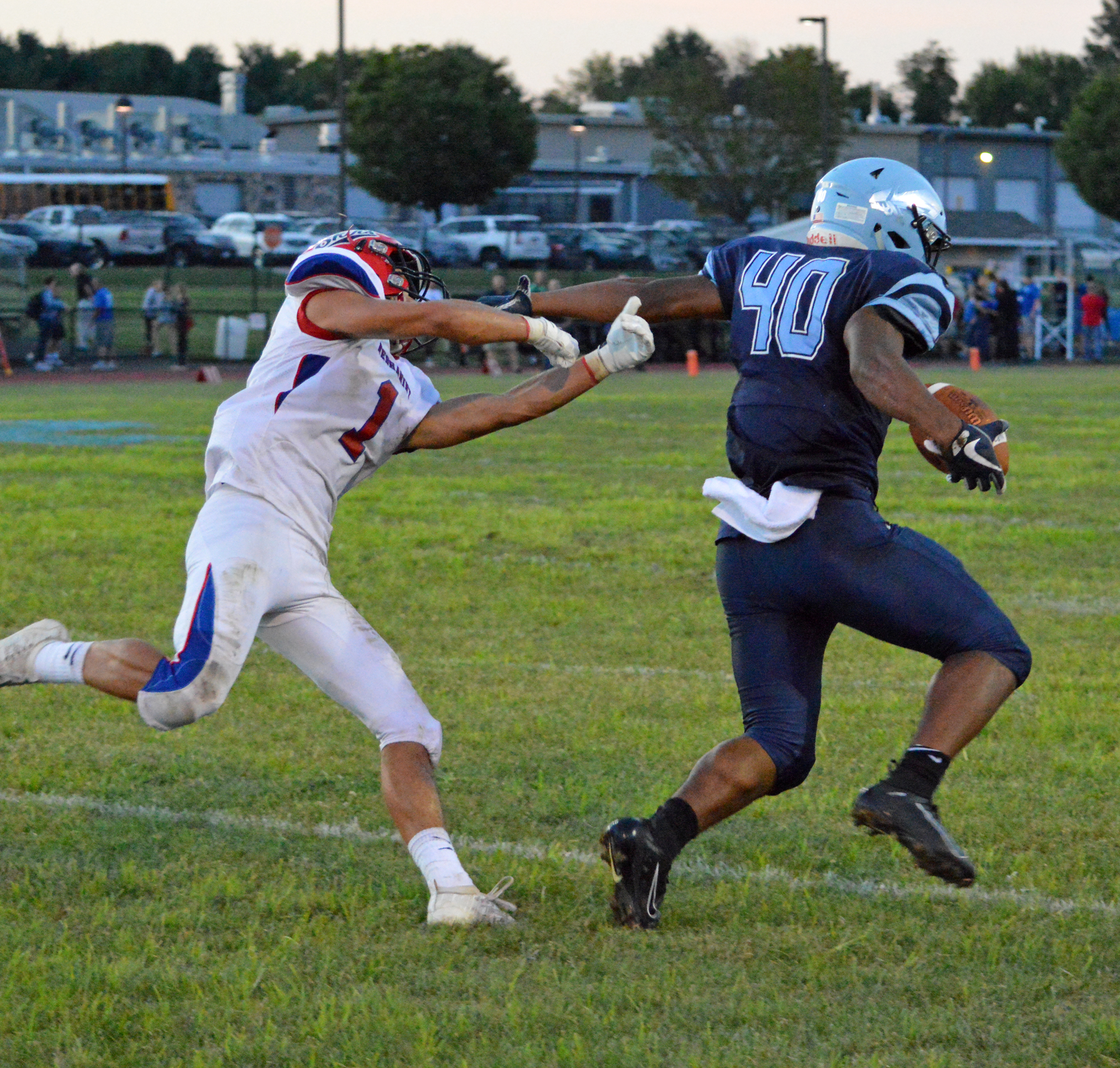 North Penn's Kahali Eaton guards himself from Neshaminy's Gavin O'Connor during Eaton's run in the first half of their game on Friday, Aug. 23, 2019. (Debby High/For MediaNews Group)

TOWAMENCIN >> When RJ Macnamara’s father, Ray, passed away in May due to cancer, the North Penn football community was there for him and his family.

“Cory Keim lives down the street from me, he would come and cut my grass for us because we were out doing stuff,” he said. “They would come, they would give meals for us — we had so much food in the house. And at the funeral, everyone was there, not one of them missed it.”

The Knights continued to show that Ray and the Macnamaras remain in their thoughts Friday night in their season opener with Neshaminy.

A moment of silence was held prior to the start of the game for Ray and after North Penn earned a 55-36 victory at Crawford Stadium, the Knights presented Ray’s wife Jane with the game ball.

#FOOTBALL: After North Penn’s 55-34 win over Neshaminy, the Knights gave the game ball to Jane Macnamara, whose husband Ray passed away from cancer in May. @MacnamaraRj & Grace Macnamara are currently on the team while @kellmac_ played at NP before graduating in 2018. pic.twitter.com/8iKRd8Mofv

“I didn’t (know about the game ball), I only knew about the moment of silence because my friend in the press box actually came down and told me before the game to give me a little heads up, said RJ, whose sister Grace is a freshman kicker on the team while their older sister Kelly also kicked for the Knights before graduation in 2018.

Limited by a hamstring injury, RJ Macnamara, a Delaware commit, still found the end zone twice on runs. Sophomore Khalani Eaton was sensational rushing for 280 yards and two scores while Kenneth Grandy return a kickoff 99 yards for a touchdown in the second quarter as the Knights (1-0) pulled away in the fourth to take the offensive slugfest between Suburban One League heavyweights.

“It was a great night,” RJ Macnamara said. “The outcome of the game was everything for me tonight.”

Evan Spann added a pair or rushing TDs while Grandy also hauled in a 69-yard touchdown pass from quarterback Kolby Barrow in the second quarter as North Penn topped Neshaminy (0-1) for a sixth straight time.

“The offensive line was fantastic,” Knights coach Dick Beck said. “Obviously, Khalani was a special player but I don’t think it was just him but he was certainly making it work. I thought it was a great night, I thought for Kolby his first start throwing some good completions and converting some third downs that were huge for us.”

The Knights needed pretty much all of those 55 points with the trouble they had slowing down the ‘Skins offense.  Receiver Ian Sheehan hauled in six passes for 220 yards and two scores while Neshaminy quarterback Brody McAndrew finished 8-of-17 passing for 268 yards, three touchdowns and an interception.

McAndrew also added a TD on a ground while running back Chris James had 115 yards and a score on 27 carries.

“Our offense was going pretty good until the second half,” said McAndrew, a New Hampshire commit. “Came out and made a couple plays early in the second half and then just kind of nothing after that. I think once they got a couple big runs our momentum shot down. We just can’t let that happen again.”

North Penn led 27-20 at halftime and extended the advantage to 33-20 when RJ Macnamara capped the third quarter’s first series with his 6-yard touchdown run at 8:67.

But the ‘Skins cut the margin to six twice in the second half — the second time when McAndrew hit a streaking Sheehan for an 80-yard score on 3rd-and-22 that made it 40-34 at 11:39 in the fourth.

Neshaminy’s Chris James reaches the ball across the goal line for a touchdown in the first quarter against North Penn during their game on Friday, Aug. 23, 2019. (Debby High/For MediaNews Group)

The Knights, however, went back up two scores on the next possession when McNamara crossed the goal line from two yards out at 7:08. Neshaminy proceeded to drive down to the NP 15 but turned the ball over after an intentional grounding call on fourth down.

“The way he’s running in practices and stuff like that, I was expecting him to do it,” said RJ Macnamara of Eaton’s big performance. “And the o-line gave him the chance to do it.”

For Grandy, it was intuition to field a kickoff at the goal line late in the second quarter.

“I was just feeling good. I felt like we had the momentum going our way,” he said.

The decision paid off in a big way, as Grandy broke through the crowd downfield, worked free on a tackle attempt from the ‘Skins kicker and dashed to the end zone for a 99-yard score, putting the Knights up 27-13 with 1:38 left before halftime.

“I just took a shot,” Grandy said. “And it was great. Our blockers really set it up for us.”

Grandy’s return was part of frenetic finish to the first half, as the Knights and Neshaminy combined for five touchdowns in the five minutes before the break.

“We just had the play designed to send me down the middle,” Grandy said. “And it was a beautiful ball.”

McAndrew found Sheehan on a 40-yard TD strike with 1:53 left but Grandy returned the ensuing kickoff to the house. McAndrew, however, pulled the ‘Skins within 27-20 at halftime as he bought time, rolled to his left and hit Mason Demi in the end zone for a 27-yard TD at 47.8 seconds.

“Me and him grew up together, played baseball together, we got a good chemistry,” said McAndrew of his rapport with Sheehan.

Eaton flipped the field and the game in the Knights’ favor when on a 2nd-and-5 from the North Penn 5 in the second quarter the sophomore got to the sideline and raced 80 yards to the ‘Skins 5. Two plays later, Spann’s 5-yard TD gave NP the lead for good.

He ended the first half with 104 yards on six carries then put had 12 carries for 176 yards in the second half with a pair of touchdowns — a 15-yard dash at 16.7 seconds in the third that made it 40-27 and the 65-yard score on his final carry late in the fourth.

“He showed some flashes,” Beck said. “Now it’s going to be up to him. Is he going to ready his press clippings or he going to say to himself he can get better? I hope he says he wants to get better.”

Eaton’s 280 yards rushing provided most of the 432 yards the Knights collected on the ground in the win. It was the first time North Penn eclipsed 400 yards in rushing since beating Pennsbury in Week 3 last season.

“If we can continue to hand the ball off and run the ball like that, that’s a pretty nice little thing to have,” Beck said.