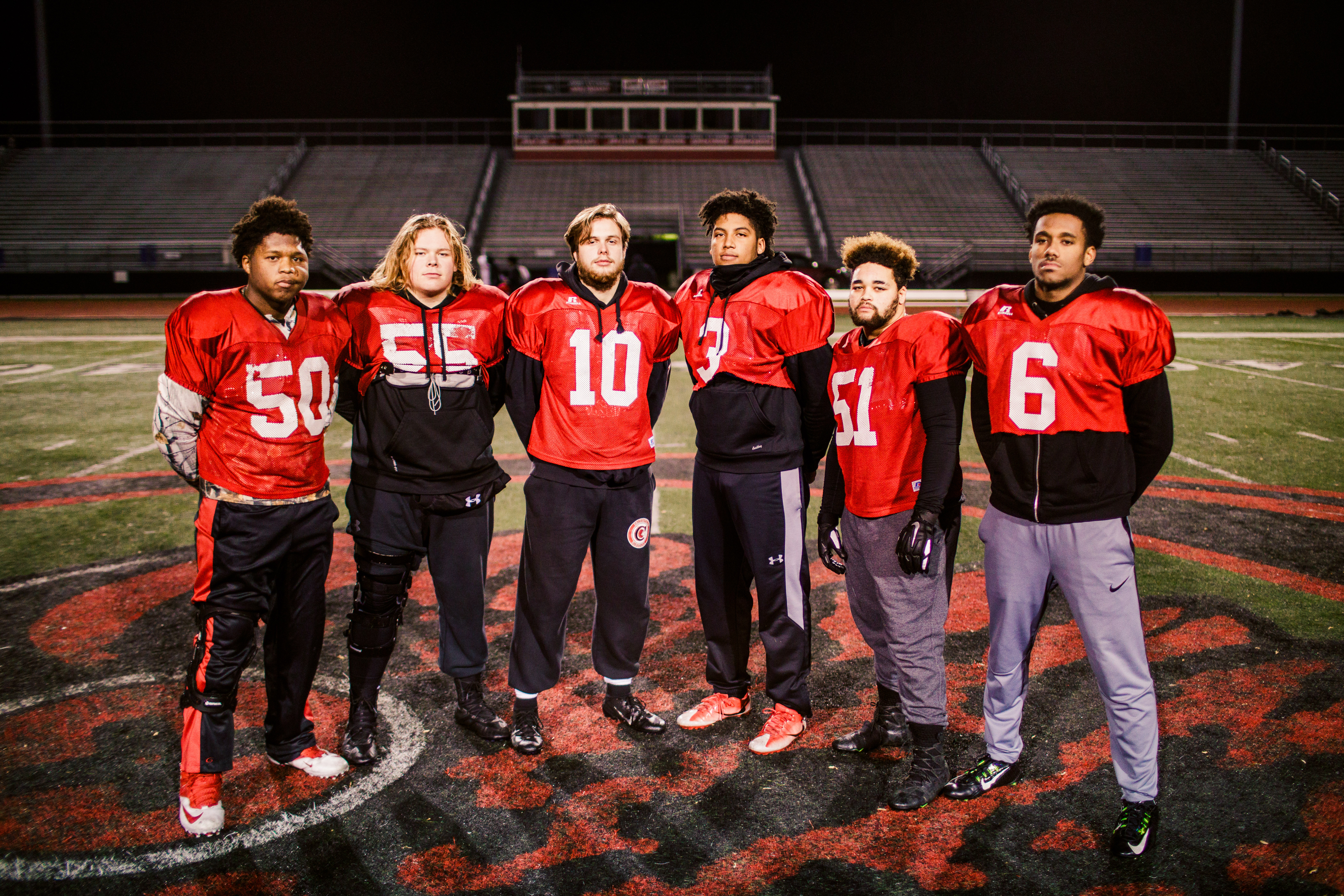 CALN >> With music blaring from a big speaker on the sidelines, Coatesville’s Jon Meeks and Jimmy Limper jump around and dance, matching the beats that seemingly negate the near-freezing temperatures.

It’s two days away from the PIAA Class 6A semifinals, and the heart of the Red Raiders’s defense is loose and having fun during Thursday practice. It seems nothing can worry a defensive line that’s been playing at its highest level as the stage continues to get bigger.

“We’re goofy,” Meeks said. “We have fun. If we’re not having fun, what’s the point of playing? Having fun and keep pushing, that’s what it’s all about. The motto we’ve been going by is offense brings tickets, defense wins championships. That’s how we feel when we’re out there playing.”

Meeks, a junior, is the pup in an otherwise veteran group. Limper is a three-year starter, fellow defensive end Tione Holmes is in his second year in the starting lineup and tackles Ayden Geter and Dylan Nichols bring senior experience, as well. This postseason, Coatesville’s starting unit has given up just 16 points in four games. In that stretch the Red Raiders have turned away some of the best run games in District 1 — Downingtown East, Garnet Valley and North Penn.

The Red Raiders held that trio to 163.7 rush yards per game, and while that’s up from the 98 rush yards the defense gave up in the regular season, consider East averaged 250 per game during the regular season and Garnet and North Penn ran for 455 and 389, respectively, the rounds prior to playing Coatesville.

“When we get out there and start shutting people down, it feels great,” Limper said. “We pride ourselves going out there and stopping the run. That’s always our first goal.” With the way Coatesville’s offense can score, opposing offenses are forced to play perfect. That kind of pressure that puts on teams, mixed with how stingy Coatesville’s defense is, it’s no wonder most games end under the mercy rule.

Holmes was voted first team defense in the Ches-Mont National Division, while Limper and Meeks took second. Geter and Nichols rotate at strong-side defensive tackle and another senior, Eric Kirk, brings a speed element off the bench at defensive end.

The talent comes in waves and the drop off is minimal.

“We’re just one group,” Holmes said. “We play together. We don’t really get a lot of credit but we work hard and have fun.”

Holmes and Limper are listed at 6-foot-3 and 6-foot-2, respectively, both over 200 pounds, and Geter and Nichols are listed at over 250 pounds.

Meeks is not only the only junior of the group, but the only one under six foot. That’s the way Ortega likes it, and Meeks has fit into the shorter, quicker mold that has become a trademark of the Coatesville nose guard with Mike Boykin and Alex Raimondo before him.

“When we lost Alex Raimondo we felt like, how are we going to overcome a loss like that?,” Ortega said. “We felt very comfortable with our defensive ends, but interior-wise we thought it was going to be a step down without Alex. Guys stepped up and stepped in there and they’re playing at a high level. With that said, Tione and Jimmy just took it to a higher level and that’s definitely what we’re feeding off right now.” For the first time all season, Coatesville’s offense didn’t click in the first half a week ago against North Penn in the district final. Instead of it being a threat to the Red Raiders’ perfect season, it was an opportunity for the spotlight to finally shine on the defense.

Coatesville held North Penn to six points until the offense finally figured things out and the second half was a celebration of sorts, with the D-line meeting at the quarterback for seven sacks.

“Usually we’re restricted from rushing a little bit because a lot of teams in the Ches-Mont don’t throw the ball up crazy, but last week we got to go after it and it felt good,” Limper said. “We got to showcase what we can do and we did it.”

It’s not an offense versus defense thing, either, at Coatesville.

“The quote we got before the game last week was ‘a great team beats as one heartbeat,’” Limper said. “I feel like we do that. If the offense isn’t doing good, like last week they started off slow but we came in and got our stops and the second half they blew them away.”

The Red Raiders are two wins away from their first state championship and what a party it would be. First, Harrisburg stands in the way in the semifinals.

“They’re definitely the energy guys, and especially game day,” Ortega said. “We want to make sure anyone who ever plays us realizes we really like playing football. Two things they’re going to say is this team’s physical and this team loves playing football.”

Mini Max Award winners announced by Maxwell Football Club
DiGIOVANNI: Harrisburg rematch won’t be as easy for Coatesville, but should end the same