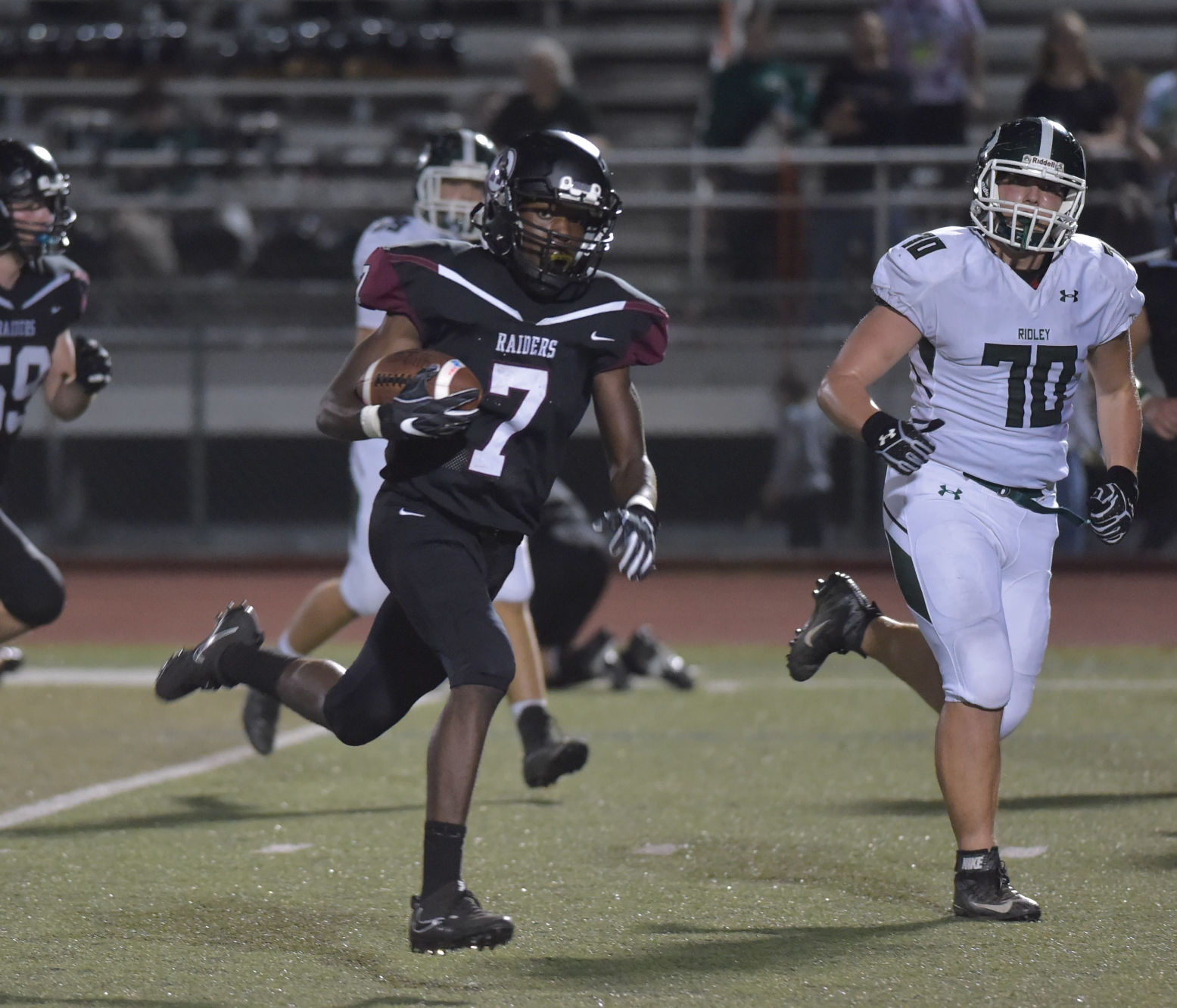 RADNOR — The celebration was on, and Jahmir Rider still had the football. He did not want to let go. You can’t blame him.

Radnor’s top wide receiver caught a 12-yard touchdown pass from Sean Mullarkey at the buzzer to send the third-seeded Raiders to a thrilling 27-25 victory Friday over No. 14 Marple Newtown in the first round of the District 1 Class 5A tournament.

It was Radnor’s first playoff victory in school history. No. 11 Unionville awaits next week.

Even if was the school’s 100th, this will be one nobody soon forgets.

“There are no words for what just happened,” Rider said. “I can’t describe that. That is the greatest feeling in the world. I can’t. …”

He trailed off. He could barely talk. The Raiders (9-2) were down 25-21 with one minute, 48 seconds remaining. They had no timeouts and had to go 63 yards. They had spoiled three previous chances to put the game away. A historic season came down to this drive and Mullarkey delivered.

The senior quarterback survived a sack — remember this play — and got the Raiders to midfield. He connected twice with Teddy Girton to get to the 12. Two incomplete passes later, there were four seconds on the clock. One play.

“Someone caught it,” said Mullarkey, who legitimately didn’t know postgame that it was Rider who hauled it in. “I just couldn’t believe it.”

Radnor coach Tom Ryan said the play was a combination of two different plays he runs. He called for a spread formation and an empty backfield to give his playmakers some space. It was something they had never practiced. Girton and Rider both ran to the middle of the field and actually collided in front of a defender just as Rider caught it. The throw was on the money.

“As far as excitement, as far as thrilling, I don’t think you can write it up any better than that,” Ryan said. “Our kids responded and I’m really at a loss for words right now. I’ve coached over 300 games in my career and this is at the top of the list.”

The Tigers (5-6) had survived all game against a team they played to three overtimes in the regular season. They forced three turnover on downs when Ryan, chasing points, passed up field goals. They missed two extra points. They were down 21-18. They had a fourth-and-long at their own 34 with about two minutes. Coach Chris Gicking, like he was a quarterback on the playground, told each of his players what to do. Joe Paoletti unleashed his best throw of the night, a perfect lob to Colin Ferry, who raced 66 yards for the score and the lead.

One player later, Mullarkey was sacked. The clock stopped. It’s unclear if the referees requested the stoppage, but the rules dictate the clock should run. The stoppage gave Radnor a quick chance to reset, and they made it count.

Marple Newtown overcame injuries and a lot more to get to this point. Senior back Marlon Weathers rushed for 134 yards and added 53 more through the air. Paoletti, a sophomore, threw for 125. The clock stoppage remained on their minds.

“I don’t want to sound like sour grapes at all,” Gicking said. “They made one more play than us.”

The Raiders didn’t notice and likely don’t care. They are not a perennial Central League power. They know that. But they knew they had something brewing this year. Mullarkey, before the winning drive began, thought back to a failed opportunity to beat Garnet Valley in a similar spot.

He was not going to repeat that.

“I don’t even know what to think, we’ve had so many downs,” said Mullarkey, who totaled 275 yards. “We never win these games besides this year. It’s a special year, this is truly a special year. We knew that in the offseason. When we got tired in the offseason, we told each other, we don’t want to be average. So we stepped up and we did what we had to do to be here. And this is just the beginning.”

The Mullarkey-to-Rider connection ended both Radnor/Marple Newtown games this season. The first one came back in August.

This one, though, might feel a little bit better.

“I guess this season wasn’t meant to end for us,” Ryan said. “I’m beyond thrilled right now.”