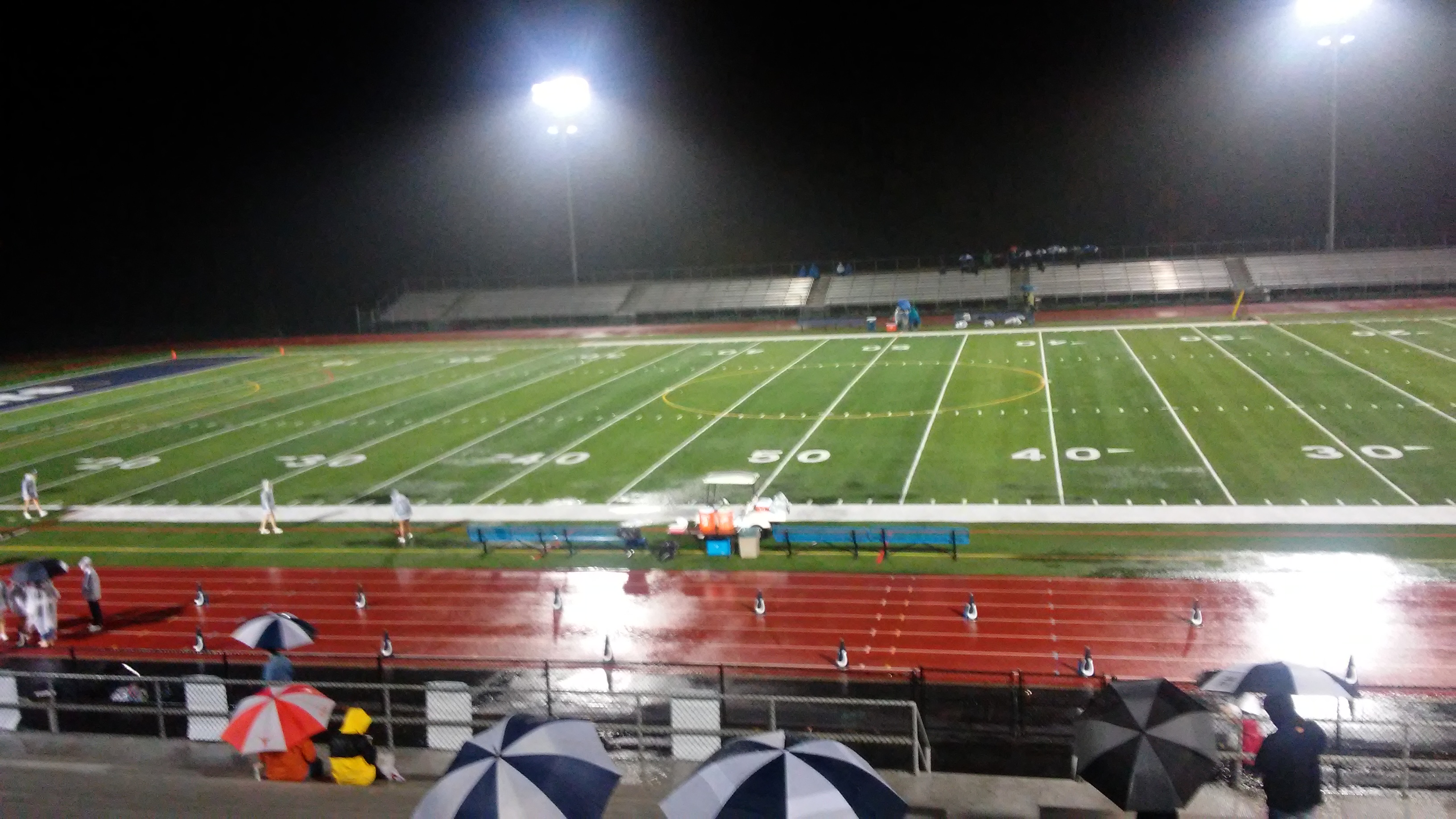 CAMP HILL >> Exeter’s football season washed away Friday night in a sea of a fumbles and Cedar Cliff touchdowns.

The No. 4 seed Colts scored 29 points after the halftime break to pull away from the 13th-seeded Eagles, 50-6, in the first round of the District 3 5A playoffs at West Shore Stadium, a contest played in persistent heavy rain.

The opening kickoff was somewhat amusingly delayed 20 minutes at the start for “too much standing water on the field” — until the officiating crew realized that was not about to change and it was either play or go home. So they played. Kickoff finally took place at 7:20 p.m.

Exeter was greatly affected by the conditions. The Eagles fumbled eight times during the contest and lost six, with five of those coming in the second half. Trailing 21-6 at the break, that stark reality snuffed any shot at getting back into the contest.

Indeed, the host Colts cashed in on three of those second-half hot potatoes and used a fourth, in Exeter’s end zone, to tack on a late safety. Cedar Cliff fumbled three times and lost two.

Exeter head coach Matt Bauer refused to use the monsoonal conditions as an excuse. After all, both teams had to endure the miserable playing conditions.

“Definitely not optimal conditions but not making any excuses,” Bauer said. “It was the same for both  teams. The difference is they executed and we didn’t. Defensively, I think we played better. Those 50 points are a bit deceiving given how many times we put the ball on the ground.

“I was proud of the way our kids fought. They played hard until the end. We didn’t protect the football.”

Exeter quarterback Kolby Haag’s playmaking abilities were compromised not only by the weather, but by a ravenous Cliff defensive line. The Colts sacked Haag four times before a leg injury cut short his evening early in the second half.

Before departing, Haag finished 4 of 7 for 91 yards and one touchdown, a 43-yard scoring strike to Devon Scott that started as a pass in the flat near midfield, with Scott turning on the jets down the right sideline for Exeter’s only score. That made it a 7-6 game early in the second quarter. The conversion was blocked. It would be, as it turned out, Exeter’s only jaunt to the paint.

“Their defense had us out of whack,” Bauer said. “We didn’t protect the football, we fumbled it away in key situations and they took advantage of it. That’s the story of the night.”

Cedar Cliff’s Jaheim Morris scored three times, but had an odd night toting the football. At one point during the first half, Morris had minus-6 net yards on eight carries. He finished with 144 on 34 and those three scores, picking steam as is his offensive line did.

At one juncture down the stretch, Morris carried the football on 17 consecutive offensive snaps, spread out over three drives.

Exeter’s first lost fumble came late in the opening quarter and set the host Colts up at the Eagles 9-yard line. From there, Morris went in from a yard out three snaps later for a 7-0 lead.

After Haag’s hookup with Scott got Exeter to within a point, the Colts fired right back three plays later, when Cliff quarterback Chris Dare found Jahiem Reynolds  in single coverage on the outside. Reynolds made the catch and did the final 30 yards himself for a 14-6 lead with 8:21 left in the half.

Cedar Cliff pushed that to 21-6 on its next possession, a nine-play, 82-yard foray that featured Morris on seven of the those snaps. Dare connected with back Nick Puig for 31 yards on second down from the Exeter 35 for the set-up, which Morris finished off on the next play from four yards out.

Haag went down on Exeter’s fifth snap of the second half, during a seven-yard sack. He clutched at his left leg and departed the field without putting any weight on it. Haag was replaced by Colin Payne, who had successfully led the Eagles to victory at First Energy Stadium in late September during the Gridiron Classic series — a date Haag had missed due to a finger injury. But Payne did not figure in the outcome, being sacked on his only two pass attempts.

Donovon Ball rumbled in from 49 yards out a little swing pass from Dare near midfield on the Colt’s initial second-half possession, a score that made it 27-6 and in effect put the contest on ice.

Morris scored his third touchdown with four seconds to play in the third quarter. It capped a quick six-play, 24-yard drive, set up by an Alex Javier fumble, to give the hosts a 34-6 advantage. Morris carried the football on all six plays, in the midst of his 17-snap workhorse streak that helped cinch the verdict.