Bombs Away: Spring-Ford explodes offensively in 66-31 win over Boyertown 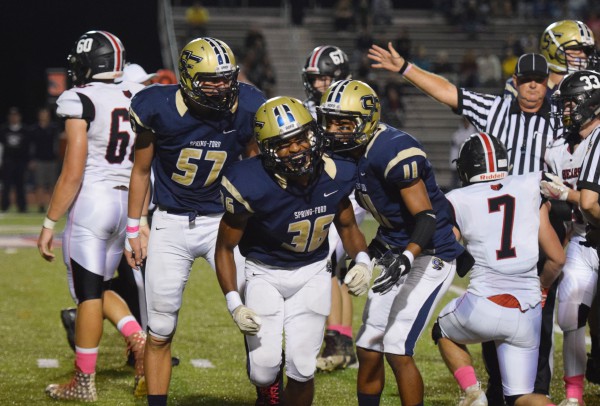 ROYERSFORD >> Friday night’s game against Boyertown represented Spring-Ford’s last chance to fine-tune their preparation for the biggest two-game stretch of their regular season. They did so in impressive fashion, topping Boyertown by a final score of 66-31 to move to 6-1 on the season (3-0 PAC Liberty).

Ryan Engro threw for 298 yards and five TDs before halftime in the Rams’ most explosive offensive performance thus far in 2018. The Rams amassed 52 points by halftime, putting up six TDs in the second quarter alone.

Engro would finish with 358 yards passing and six TDs through the air, a season-best for the league.

Spring-Ford’s Nathanial Orkfritz-Robinson forces a fumble by Boyertown’s Dylan Robertson on the opening kickoff. The ball went out of bounds to retain possession for Boyertown. (Austin Hertzog – Digital First Media)

“Just an all-around great offensive performance tonight,” said Engro. “The line gave us time, the receivers made plays. It was just a fun night for us.”

The win leaves the Rams tied atop the Pioneer Athletic Conference’s Liberty Division with Perkiomen Valley and one game ahead of Owen J. Roberts. Not so coincidentally, those two teams represent the Rams’ final two regular season opponents. Spring-Ford controls its own destiny and could reach its first PAC championship game since the league went to a two-division system with wins in the next two contests.

The Rams got off to a similar fast start last season before everything came crashing down in those final two contests a year ago. After dropping the OJR and PV games by a combined score of 61-7, Spring-Ford barely recovered in time to qualify for the District 1 Class 6A playoffs, where they lost to Neshaminy in the first round.

“Right now, it’s just OJR,” coach Chad Brubaker said in regard to the Rams’ lookahead. “We’re not looking ahead at all — we were embarrassed by them last year, and they scheduled us for Homecoming again. We’re going to go in there with a lot of fire next week.”

The returning members of the squad say that experience has fueled their motivation for the stretch run this year.

“Last year’s been bothering me a lot,” Engro admitted. “33-0 last year against OJR — we’re definitely ready to get some revenge.”

The Rams’ offense wasted no time Friday night showing why they expect this season’s outcome to be different.

After forcing a quick three-and-out, Leo Van Hulst’s punt return set Spring-Ford up in Boyertown territory. After a tough 4th down run from Stephen Brill extended the drive, QB Engro found his favorite target Dante Bonanni all alone down the left sideline for a quick 7-0 lead.

The ensuing Boyertown drives each ended in fumbles recovered by Armante Haynes, who was dominant for the Rams defensively. The first resulted in a 28-yard Taylor Smith field goal.

The second turnover was converted into a nine-yard Brill TD run that ignited a second quarter that was (unofficially) one of the longest of the season and (officially) the highest-scoring of the PAC campaign, with the Rams and Bears combining for 60 points. What follows is a synopsis of the most chaotic quarter of football anyone in attendance could remember:

Boyertown quickly responded with a lateral pass from Noah Segal to Connor Rohrbach, who found tailback Jamie Moccia all alone downfield for a 74-yard Bears TD. After a blocked PAT, Boyertown had trimmed the Rams’ lead to 17-6.

But it only took Spring-Ford one play to respond, as Engro hit Brill down the seam for a 58-yard score. In the first 39 seconds of the second quarter, the teams had combined for three touchdowns.

The teams took about a two-minute break from scoring until Segal hit Rohrbach for a 22-yard TD on a drive aided by Spring-Ford penalties.

But the Rams wouldn’t take long to answer, as Engro found Bonanni again, this time for 37 yards and a 31-12 Rams advantage. Three minutes later. Engro continued his excellent first half, finding Noah Baker for a 23-yard TD—his fourth of the half.

Moccia would respond with a 97-yard kick return—unlike an earlier effort, this one was not flagged—and Boyertown cut the deficit to 20 points with 2:30 remaining before halftime.

Spring-Ford quarterback Ryan Engro runs for a first down on a keeper against Boyertown. (Austin Hertzog – Digital First Media)

Engro quickly made it five TD passes, finding Max Bunn after a prolonged scramble from 24 yards away. After Boyertown fumbled the ensuing kickoff, it was Baker’s turn to join in the fun, as he took an end-around and tossed it to Nicholas Teets for a six-yard TD.

When all was said and done, the teams combined for 60 points and 23 accepted penalties in a second quarter that took one hour, nine minutes to complete.

“No, I haven’t ever seen anything like that,” Brubaker said. “(Jamie) Moccia’s a very good player, but our kickoff coverage was horrendous, and then we get a punt blocked. It definitely gives us plenty to work on for next week.”

Boyertown receiver Connor Rohrbach (15) is congratulated by Brady McFalls after throws a touchdown pass on a trick play in the second quarter against Spring-Ford. (Austin Hertzog – Digital First Media)

Halftime did little to break the Rams’ momentum, as the first play saw another Engro-to-Baker connection to make it 59-18 and put the game into running clock territory.

“It’s just a matter of the read on each play,” Engro responded when asked if he had a go-to receiver. “Whoever’s open—I’m gonna hit ‘em.”

Andrew Yoon quickly added another Rams touchdown on a 20-yard run that showed great vision on a bounce to the outside.

Boyertown got a couple of late touchdowns to close out the scoring on runs from Dylan Robertson and Segal. The Bears fell to 1-6 (0-3 PAC Liberty) on the season. Six lost fumbles on the evening doomed the Bears, who nonetheless turned in some impressive plays against a tough Spring-Ford defense.

“They (Spring-Ford) are at the level we’d like to get to,” said Boyertown coach TJ Miller. “Right now, though, we are two steps and a few turnovers behind.”