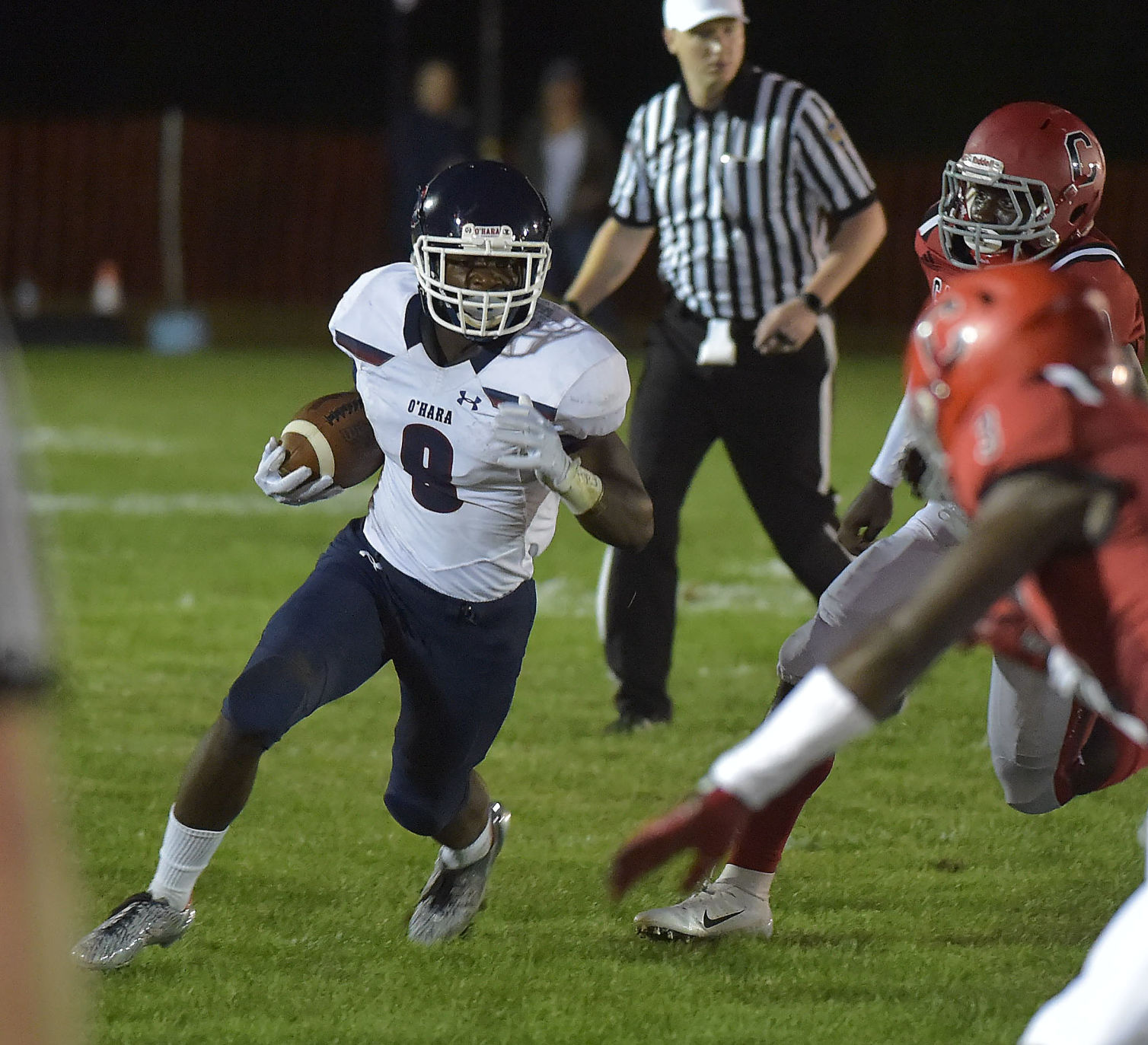 MARPLE TWP. — Cardinal O’Hara scored more points than it has all season. It earned a needed bounce-back victory in its Homecoming game. Life seemed good for the Lions.

Yes, O’Hara beat Lansdale Catholic 27-9 Friday to move to 4-2 overall and 2-2 in the PCL Blue. Yes, backs Keed Kpoto and Quasir Cottman both eclipsed 100 rushing yards and popped big scoring runs. But no, coach BJ Hogan was not pleased.

“I’m not, I’m not happy at all with the way our offense was playing,” he explained. “We’re turning the ball over, it’s just unacceptable. I thought we did a really good job defensively, but that’s the most points we scored all season. It’s too many mistakes.”

O’Hara fumbled on the third play from scrimmage. On its next possession, it fumbled inside the Crusaders’ 5-yard line. A fumble on a second quarter punt return nearly ended in disaster. Late in the first half, it couldn’t pick up one yard to extend a series. An interception stalled a third quarter drive. It went on.

Hogan preaches taking care of the football. O’Hara didn’t do that. He preaches field position. O’Hara didn’t do that, either. Lansdale Catholic (2-4, 1-3) started around midfield on its first three second-half possessions when it was a 14-9 game. The defense held. It was not an ideal way to go about winning a football game.

“Without a doubt,” Hogan said. “We kind of lost the field position battle all night with these guys. They punted the ball inside the five a couple of times. That kills you. At the end, we were able to get a big drive and then go down and break a big run.”

Lansdale Catholic scored first on Peter McHugh’s one-yard sneak early in the first quarter. It was unable to take advantage of repeated short fields. A long drive late in the first half ended with Brendan Menges’ 23-yard field goal.

The Crusaders were down five at halftime and in the game. The second half was mostly frustration. Danny Dutkiewicz ran hard, totaling 86 yards to lead his squad.

Big plays were the story of the night for the Lions. Cottman hit one late in the first quarter for 72 yards. Kpoto answered his “big brother” by taking it 58 yards to the house on the ensuing possession. Early in the fourth quarter, with the offense stuck in neutral, Chris Kirby took a simple cross from Luke Sprague 90 yards for a game-clinching score.

He stiff-armed a Crusader defensive back to break free, went around a downfield block and raced the rest of the way. Kpoto and Cottman skidded through gaping holes untouched for their touchdowns. Their wheels did the rest.

The two are good friends and truly enjoy seeing each other do well. Kpoto had 138 yards on 20 carries. Cottman had 112, adding a late 21-yard score, as well.

“We’re just trying to make each other better,” Cottman added. “We’ve been playing (together) since we were little.”

The big plays are something that’s been missing from O’Hara’s offense. Hogan relented, not quite with a smile, that at least this was something that he enjoyed seeing amid a resounding victory.

“I’ve been saying that for four years now, we haven’t had guys that can break (one),” Hogan explained. “Once they get in open field, they’re gone. They’re both track kids, they run away from people. That’s what you need.”