With team behind him, McAdams makes plays for Upper Darby 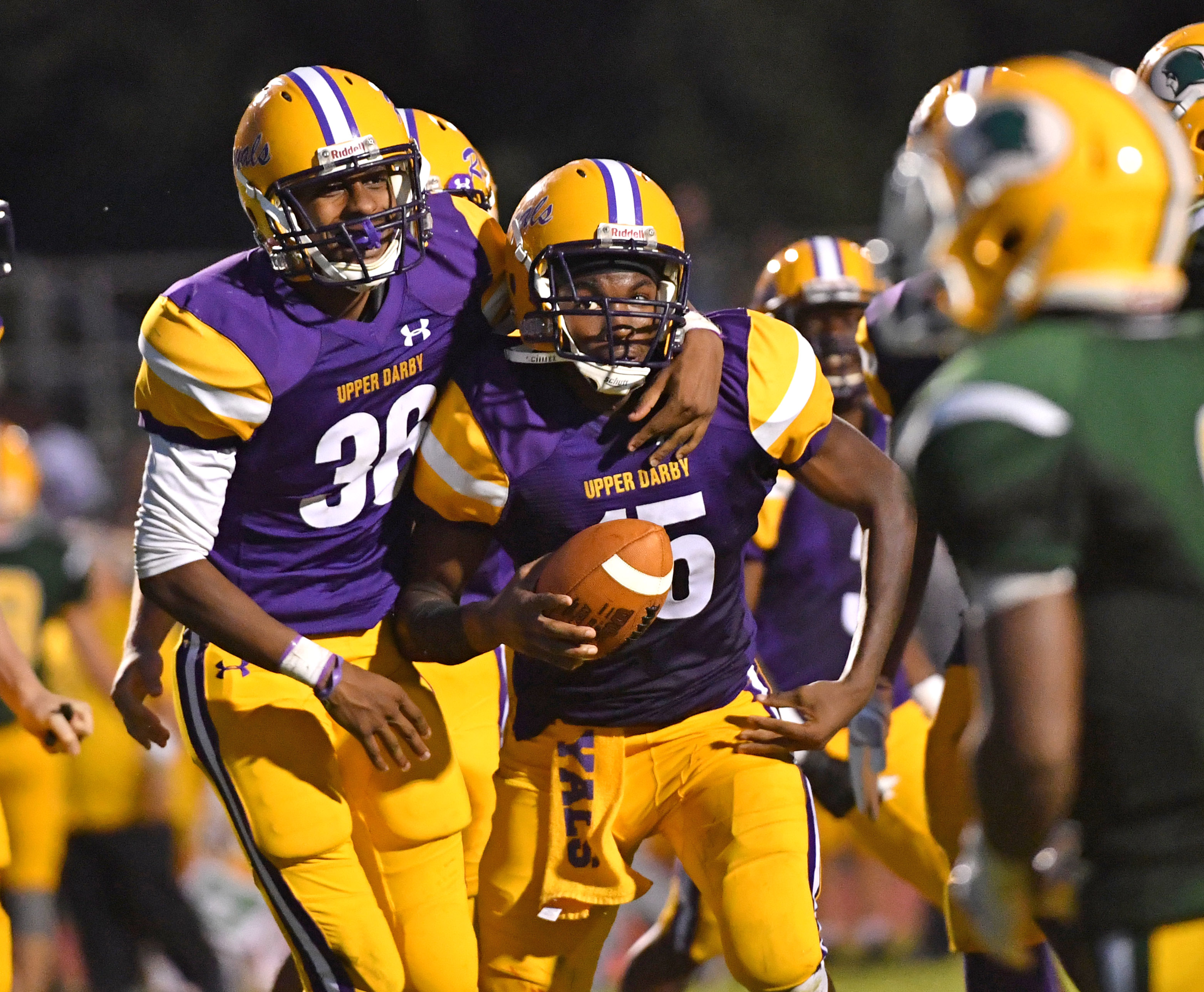 Upper Darby’s emerging tailback rushed for 206 yards and four touchdowns as the Royals earned a decisive 41-28 victory over Strath Haven to move to 4-1 overall and 3-1 in the Central League. They never trailed. They did just enough defensively against Kevin Clancy’s tricky Wing-T.

McAdams made it happen offensively. His plan harkened back to the bygone days of the sport — three yards and a cloud of dust. Well, slightly more than three.

The junior bruiser gained at least those three-and-a-half yards on all but three of his 27 carries. Only two — including a first-quarter 44-yard touchdown run — went for double digits. It mostly six, seven, eight yard runs. Over and over again. McAdams carried the ball on 17 of Upper Darby’s first 18 plays of the second half.

As this was happening, Royals coach Rich Gentile wasn’t trying to reinvent the wheel. The Panthers (3-2, 3-1) were getting worn down by the play. McAdams kept running at them and running over them. His penultimate carry was an early fourth quarter eight-yard scoring burst. He trucked a Strath Haven defender right on the goal line.

“It’s nice when you can run downhill,” Gentile said. “He might have the best forward lean out of any back that I’ve seen in awhile. I mean, he does not go backwards.”

McAdams delegated well. His numbers were a career-high, he knew that much. But it was achieved because of the line, the team. Fullback Max Avoutsou keyed blocks. Speedster Marson Weh kept the defense honest on the outside. Rashid Edgefield spelled him when needed.

“I played good, but I’ve got to give it up to the o-line, too,” McAdams said. “That’s the best blocking they’ve given me, so I appreciate it. It’s not all on me, it’s the coaches, the team.”

McAdams had two first quarter touchdown runs. Strath Haven’s Arion Ford returned a kickoff 87 yards for a score in between. Weh took a simple slant from Kevin Kerwood 42 yards to the house to make it 21-7 early in the second quarter. Jake Fisher answered that with a one-yard quarterback sneak.

It was a game at halftime at 21-14. Then McAdams took control. On the opening possession of the second half, he gained all 60 yards and scored on a six-yard charge. But it was the team.

Zack Hussein added two late touchdown runs for Strath Haven, with Kerwood finding Avoutsou from six yards away sandwiching in between. He rushed for 248 yards, though a bunch came late in the contest with his team down.

The Panthers had 294 yards in all on the ground. The Royals had 347. Gentile was more than happy to get out of here with that.

For the first time in a few years, something just might be brewing for the Royals. This was discovered Friday amid a convincing victory. Now, with winnable games in front of them, they can’t take a step back.

“We just need to not have a hiccup,” Gentile said. “Our offense picked us up tonight and did a great job controlling the ball and getting us the win. This was a game that we really needed to have.”