Interboro’s defense has no answers for Oxford 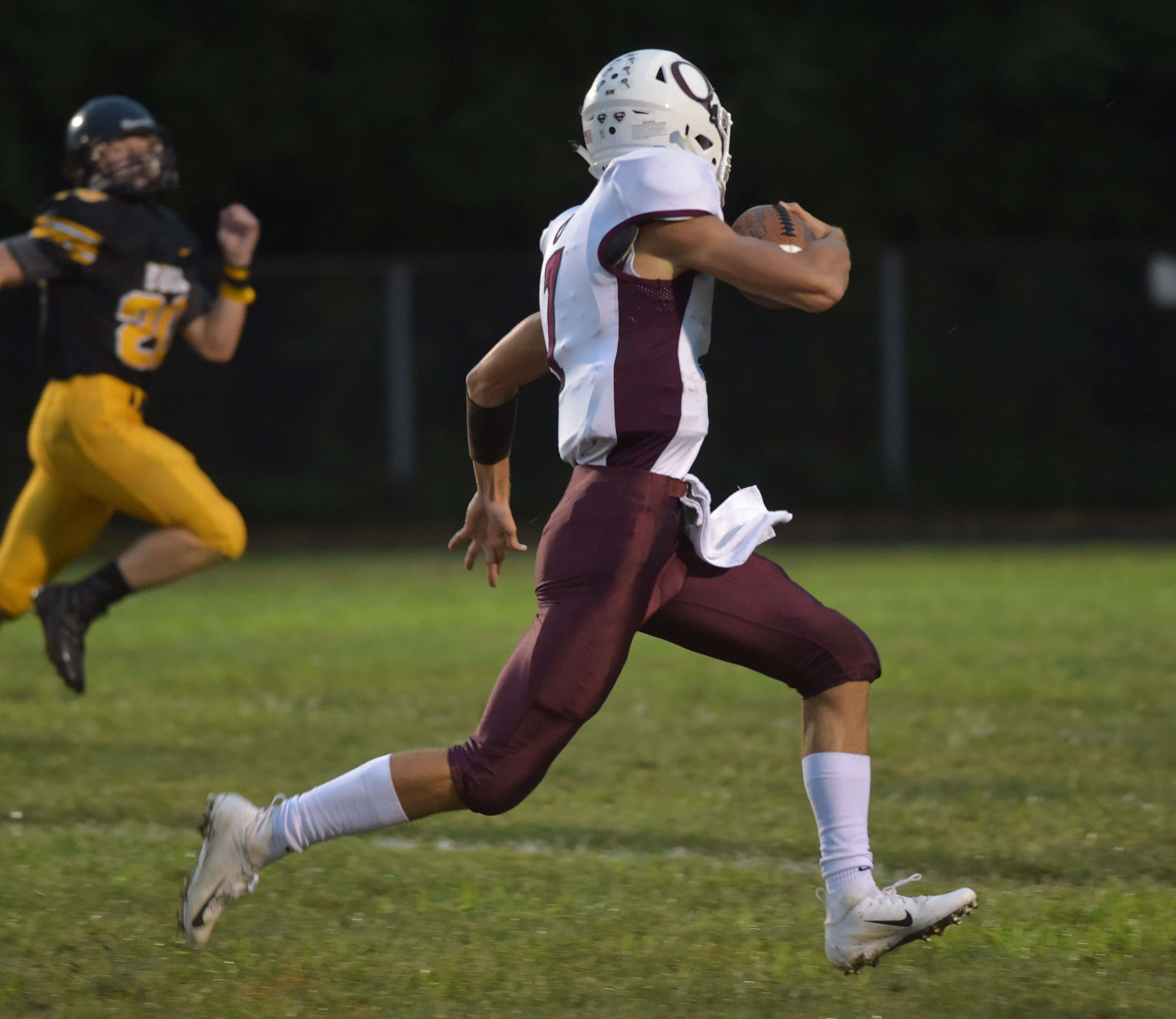 GLENOLDEN >> Late turnovers and mistakes proved costly for Interboro as the Bucs dropped a 50-27 game against a talented and prolific Oxford team Friday night at the South Avenue Sports Complex.

The game was played in a steady drizzle that made handling the ball a challenge all night. The teams combined for eight fumbles.
Oxford (2-0) jumped out to a 20-9 lead with 4:40 left in the first half on a 45-yard touchdown pass from Hornets quarterback Brett Kochmansky to do-it-all back Timothy Faber.

The Bucs came back to score on an 11-yard touchdown pass from Jared Dellipriscoli to Shane Langston just before the half.
Interboro (1-1) struck again on the Bucs first drive of the third quarter when Dellipriscoli hit Tim Convery with a 23-yard strike in the end zone to go up 21-20.

But Oxford outscored coach Steve Lennox’s squad 30-6 the rest of the way with most of the damage happening in the fourth quarter.

“I was pleased at the way we came back and took the lead,” Lennox said. “But you have to give them credit, they made a couple of plays that I was a little disappointed with.”

The score was 26-21 heading into the fourth quarter. Normally that is when Interboro plays its best ball. But two turnovers that the resulted in touchdowns for Oxford was too much to overcome.

Kochmansky, a senior quarterback for the Hornets, had a big night in every aspect of the game. He rushed for 102 yards on 18 carries and three touchdowns. He threw 12 passes, completing six for 183 yards and two touchdown passes.

“He’s an exciting ballplayer,” Lennox said of Kochmansky. “We saw him on film. We knew he was a threat, under some bad conditions they executed well with him.”

When you look at the numbers Kochmansky put up, it is easy to say the leader put the team on his back. The 6-0, 167-pounder was having none of it.

“I think that everything that happened tonight, the biggest part of it was the O-line,” Kochmansky said after the game. “Everything happens with our O-line. Tonight our guys just had an amazing game. It’s probably one of the best games our offensive line has played, almost ever. Big thanks to them.”

Kochmansky talked about how head coach Michael Means was stressing being physical for four quarters and the Hornets obviously listened.

“The big thing today that coach Means was discussing with us before the game and at halftime was matching their physicality,” Kochmansky said. “Interboro is a pretty physical team. What we did, especially in the second half, was not only match their physicality, but raise the bar.”

Dellipriscoli finished 12 of 19 for 166 yards, three touchdown passes and an interception.

Lennox said he is not going to hit the panic over one game that got away from them.

“I think the kids played hard,” Lennox said. “I’m not down on them. We just have to eliminate the mistakes and correct them.”