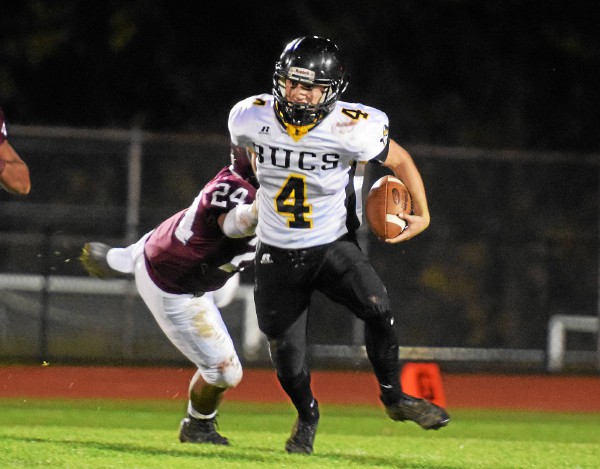 NETHER PROVIDENCE >> A returning quarterback may mean there’s more run-pass balance from Interboro’s offense this season. But it doesn’t mean that for coach Steve Lennox, third down is automatically a passing down, even as Jared Dellipriscoli has matured under center.

That’s less a commentary on his signal-caller than it is praise for option No. 1 on the third-down call sheet. Six times, Interboro gave Mike Moore the ball on third down in Friday’s season-opener against Strath Haven. Six times, Interboro’s big back plowed over and through defenders to move the chains.

Moore was the difference in a sloppy and error-prone Week 1 contest, his 178 yards on 29 carries powering Interboro to a 23-15 win in the Delaware County Athletes Hall of Fame Kickoff Classic.

“I know just knowing my coach, he’s going to keep on doing it,” Moore said of the third-down reps. “But I hope the whole season plays out like it did tonight.”

QB sneak TDs only. Dellipriscoli from the 1. Moore runs the 2-pointer. 8-7 Bucs. pic.twitter.com/YPcGuf5e2o

Moore ran for one of three Bucs touchdowns, a two-yard dive in the third quarter that put Interboro ahead for good at 16-15 with 4:48 left in the third quarter. He added the two-point run on Dellipriscoli’s second-quarter tally, which the QB reciprocated with a bootleg that baffled Haven’s defense for the conversion of Moore’s score.

Shane Langston added a 23-year scamper in the fourth quarter to ice the game, part of 301 yards on 53 carries for the Bucs. Much of that was the combination of Moore and the Interboro line, which blasted the Haven front off the ball time and again.

And when Moore got to the second level, he knew how to handle himself sans blockers, like a 28-yard steamrolling up the middle on the drive leading to Langston’s touchdown where Moore dragged a tackler with a grasp on his jersey for 15 yards.

“After a while, I started getting in my element,” said Moore, who was awarded a plaque by the Delco Athletes Hall as Interboro’s game MVP. “It took a little while to get there, knock the butterflies out in the first game. My linemen were doing a great job blocking. Those first five years on every run I was getting was because of them.”

“It’s Buc football,” Interboro’s Andrew Grieb said. “That’s how we do. We just pound people. That’s what we do. It’s a blessing to have a guy like Mike.”

Things didn’t start out that way, with Grieb fumbling the opening kickoff and allowing Strath Haven to draw first blood via quarterback Jake Fisher’s seven-yard touchdown on fourth down. But Interboro’s defense shifted the balance in the turnover battle.

The Panthers fumbled five times, losing three. (Interboro only lost two of its five fumbles). And the turnovers came at the worst times.

Haven’s defense made a stand late in the second quarter, thanks to an Ethan Belville tackle for loss and a Belville pressure of Dellipriscoli on fourth down that led to a big loss on intentional grounding. Fisher then completed his only pass of the day to Belville for 36 yards, with an Interboro late hit tacked on, to the 6-yard line.

On the next play, Zack Hussein coughed up a fumble, recovered by Michael Wittorf. Hussein fumbled again on the first drive of the third quarter, scooped up by James Udowenko to set a short field that led to Moore’s touchdown.
And Strath Haven threatened to reply quickly to Langston’s scoring burst when Jaris Adams returned the ensuing kickoff to midfield. But Ibo Pio had the ball poked out on the next play, Grieb jumping on it.

“Earlier in the game, I could’ve had another but I tried to pick it up and run,” Grieb said. “That one, I saw the ball, fell on it and it was perfect. It came right into my hands.”

“It’s really tough, especially late-game situations,” Pio said. “We were on a drive and could’ve scored. All it is, is eight points, and if we didn’t fumble those two balls, it’s probably two touchdowns there. So it’s crucial.”

Ibo Pio in from the 3. Hussein runs it for 2. 15-8 Haven up on Interboro. pic.twitter.com/XCLdcu4UTn

Arion Ford got the ball right back for Strath Haven midway through the fourth quarter, but that drive stalled on downs after two straight Fisher incompletions, the latter under heavy pressure from Vincent Kalodner.

As if to prove the “not our day” point, Pio stripped Moore on Interboro’s final drive … and sent the ball right into the hands of Interboro’s Evan Sorrentino. Grieb put away the final drive with a 32-yard burst to flip the field and lead to the victory formation.

Hussein ran 20 times for 111 yards, and Pio added 16 totes for 89 yards, including a three-yard touchdown in the second quarter.

Langston (nine carries for 55 yards), Grieb (six for 44) and Dellipriscoli (six for 24) kept the Bucs moving. Dellipriscoli was 6-for-14 through the air for 41 yards, Grieb grabbing four balls for 34 yards. It was enough to overturn nine penalties for 89 yards stepped off against the Bucs.

Interboro proved to be the fresher team late, thanks in part to the punishment meted out by Moore and company.

“We win the game in the fourth quarter,” Grieb said. “We weren’t giving up. We came out more confident than ever. I guess we knew we had the game. We knew we had each other.”