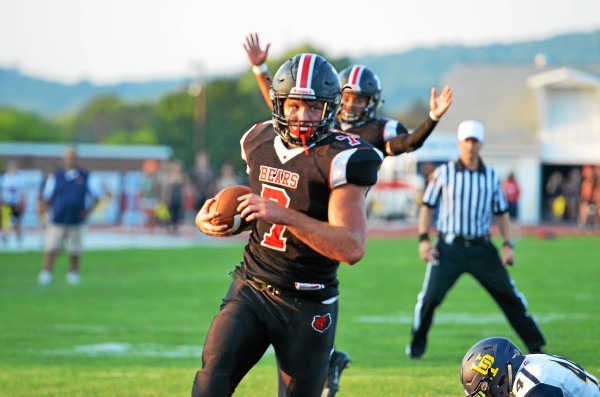 BOYERTOWN >> Three months ago, the seating infrastructure at Boyertown High School’s BASH Memorial Field was deemed unsafe. The Boyertown faithful was therefore forced to sit on what has typically been the away side while the grandstands remain uninhabited.

No matter, however. The Bears fans had plenty of reasons to get up out of their seats.

Boyertown ran rampant over Upper Perkiomen in both teams’ regular season opener, stacking up a combined 322 yards rushing on the way to a 37-12 win in a Pioneer Athletic Conference divisional crossover matchup.

“That’s how we wanted to come out and start the year,” said second-year head coach TJ Miller. “The learning curve is gone. This year it’s all about building up that team unity together.”

Running back Jamie Moccia was the foundation of the big night. The junior rushed for a career-high 190 yards with three touchdowns on 17 carries. He also pulled in one reception — an underneath route just before the half from Ayden Mathias that he turned into a 53-yard touchdown — where he showcased the speed that earned him a fifth-place medal in the 100 meter dash at last year’s PIAA Championships.

“It just turned out to be my night, I guess,” said Moccia. “It wasn’t necessarily game-planned for me, but everyone around me did their jobs. I just got the points to show for it.”

“Whatever hair I have left is gonna go gray with some of the plays that he makes,” said Miller of Moccia. “He goes against conventional football, but we know he can carry the load for us. He really earned this one for us.”

Mathis finished with 65 yards passing and another 53 on the ground.

The Bears opened up the first quarter with a methodical 16-play drive that took the first eight minutes of the game, which played exactly to their gameplan.

“We made solid contact on the line of scrimmage, but they just kept driving, picking up the three our four yards,” he said. “There was one elite athlete on the field and that was Moccia. He was the real difference maker.”

Moccia put the finishing touches on four of Boyertown’s first five drives of the night, including touchdowns runs of six, 19 and 71 yards before pulling in his lone reception on the night as Boyertown held a 30-0 lead by the half.

Upper Perk’s offense couldn’t get anything going in the early stages while playing without returning leading rusher Tyrese Reid, sidelined with an ankle injury.

The Tribe finished with four turnovers on the night — three fumbles during the first half where they were held to just 67 yards.

For the game, Malachi Duka stacked up 137 yards rushing and a touchdown on 19 carries. Tyler Weber looked solid in his debut behind center where he passed for 118 yards, including an eight-yard tip-drill catch by Collin Funk in the back of the end zone during the third quarter.

“Overall I thought he managed the game pretty well,” said Hontz. “He had control of the offense and that’s what we were looking for.”

Andrew Carducci had five catches for 52 yards while Luke Whary rushed it five times for 37 yards.

Up Next >> Boyertown will travel to face Exeter for a non-league game Friday night at 7 p.m. A win would give the Bears their first 2-0 start since the 2013 season, where they finished 7-4 overall.

Upper Perk will host Kutztown Friday at 7 p.m. The Tribe is looking to avoid its first 0-2 start since 2013.

Reaves leads Chichester to stunning win over his old team