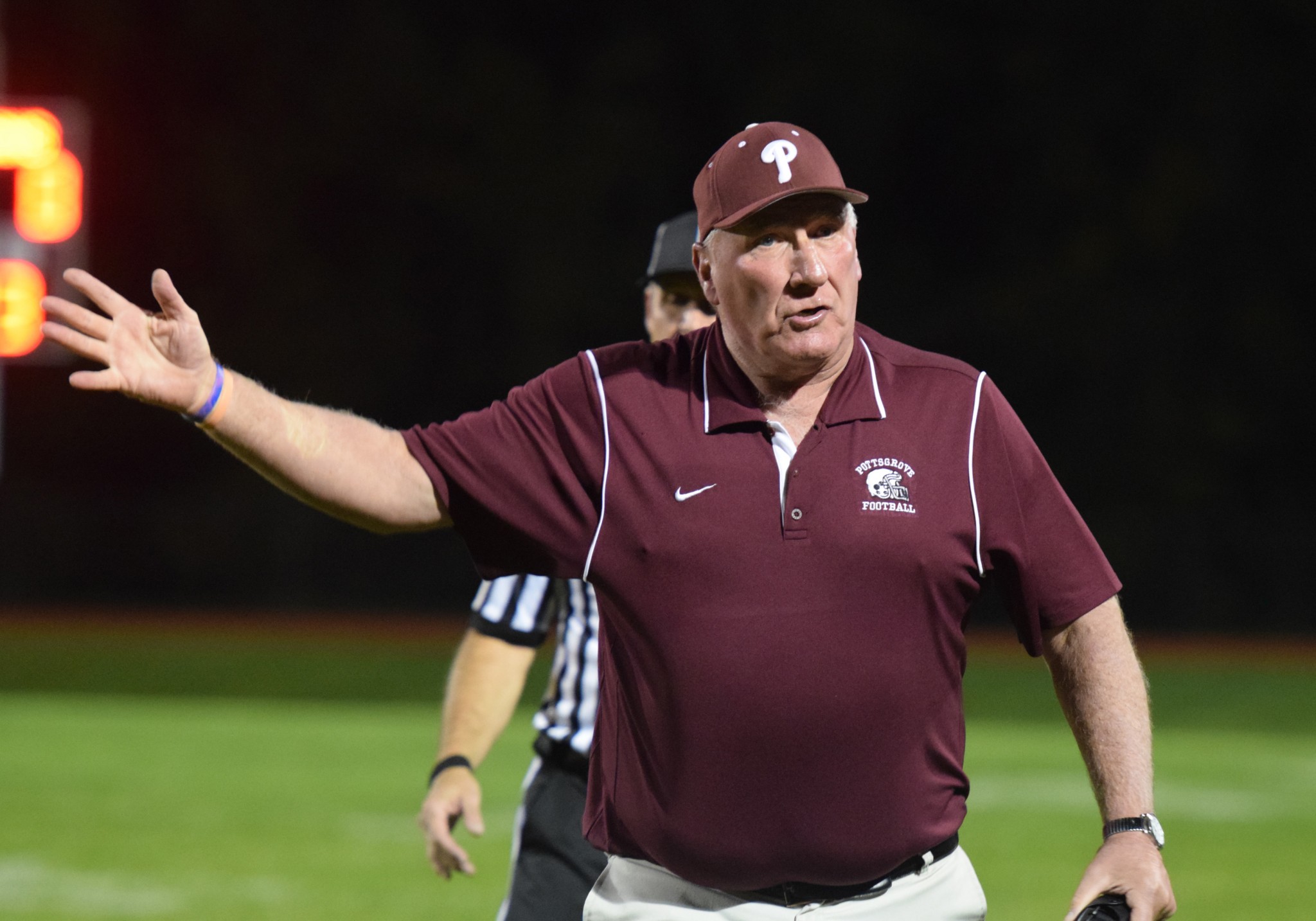 POTTSGROVE >> Pottsgrove head coach Rick Pennypacker will lead his Falcons out onto their home field for one last time Friday night.

His players realize that, and have one goal in mind as they face Upper Perkiomen in the District 1 Class 4A title game at 7 p.m.

“This one is for Penny, for sure,” junior right tackle Justin Adams said.

Adams’ words echo what is felt across the entire Pottsgrove locker room. Friday night’s game isn’t just for them, but a way to say thank you to a coach who has toed the Falcons’ sideline since 1989, guiding the team to three district crowns in his storied tenure.

“It’ll mean everything to us,” Pottsgrove senior defensive back Desmond Austin said. “We’d be the first Pottsgrove team to go back-to-back (district titles) all while winning one for Pennypacker during his last year coaching. It would be the perfect way for us to cap off his and our last game on our home field.”

Standing in the Falcons’ way, however, is an Upper Perkiomen team that is also looking to make their mark in the history books. Coming off their first district playoff win since 1997, the Indians are seeking their first ever district title. Winning it would be “monumental” for the program, according to senior running back/linebacker Tyler Whary.

“That’s what we’ve been aiming for since freshman year,” he said. “That’s been our goal: win a district championship.”

To do so, the Indians will need to defeat a team that they haven’t beaten since 2006.

“I think we need to keep our spirits high,” Whary said. “Pottsgrove is daunting with Rahsul and an amazing offensive line. We just need to keep our hopes high. We practiced hard throughout the week and it should pay off tomorrow.”

Upper Perkiomen and Pottsgrove both aren’t taking too much stock into their meeting earlier in the season, a 55-24 victory by the Falcons. Both Whary and Austin are expecting a closer contest than the 30-point margin in Week 7.

“Upper Perk is a good team,” Austin said. “We just have to go out and play 100 percent for the full game and give everything we got.”

“I think we’ve been able to see what they’re going to run,” Whary said of watching film from the teams’ first meeting. “We switched things up and we got a couple base defenses that we can run this week.”

According to The Weather Channel, the kickoff temperature will be hovering around 25 degrees with winds approaching 20 miles per hour. Don’t expect too much passing, but that’s a given due to the run-heavy offenses that both team’s present, both entering Friday night averaging more than 35 rush attempts per game (36.6 for Upper Perkiomen; 44.5 for Pottsgrove).

“It’s going to be ground and pound all night,” Whary said.

Pottsgrove’s Rahsul Faison dives into the end zone for a touchdown in the second quarter against Interboro. (Austin Hertzog – Digital First Media)

Pottsgrove senior running back Rahsul Faison has rushed for 350 or more yards in two of the past three games against the Indians. He finished with a season-high 350 yards and six touchdowns in the victory in Week 7 and had 360 yards and three scores in a 28-14 victory in last year’s district semifinals.

Battle of the Backs

Elsewhere around the PAC

Perkiomen Valley will look to avenge its 29-0 loss to Pennridge in Week 3 as it’ll host the Rams in the District 1 Class 6A quarterfinals at Thomas J. Keenan Stadium Friday night. Pennridge is coming off a 24-0 blanking of Quakertown in the first round, running back Kyle Schetter rushing for two touchdowns in the victory. Perkiomen Valley got a yeoman effort from backup running back Malik Smith II, the Norristown transfer rushing for 100 yards and two scores on just nine carries as the No. 2 Vikings came back to down Penn Wood 38-30.

Last meeting >> Pennridge’s defensive effort led the way, forcing a safety, two interceptions and three sacks in the shutout victory. Josh Pinkey rushed for a game-high 134 yards on 11 carries as the Vikings offense was held to 184 yards of total offense, their second lowest total of the season.