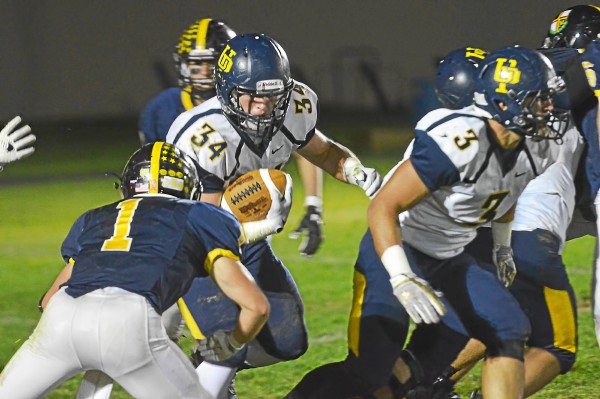 CONSHOHOCKEN >> It had been 20 years since an Upper Perkiomen team won a district football playoff game.

After Saturday’s result, that timer can restart.

Tyler Whary rushed for more than 200 yards and three touchdowns while Trevor Stephen provided the game-sealing interception as No. 3 Upper Perkiomen came back to down No. 2 Pope John Paul II 28-21 in the first round of the District 1 Class 4A playoffs.

It’s the Indians first playoff win since 1997 and one that came under doubt as the team fell behind 14-0 midway through the second quarter against a Golden Panther squad looking to avenge a 41-14 loss on their home field three weeks ago.

But for the Indians, there was no way they were leaving that field without a victory in hand.

“We were saying there’s no tomorrow all game,” Stephen said.

“No one wanted this to be our last game,” Whary said. “PJP played a hell of game, I’ll give it to them. But there was no way we were giving in.”

Whary, a senior running back who learned a few hours prior he had been selected to play in the Blue-Gray Football Classic, kick-started the comeback on the first play of the second half, following the lead of fullback Austin Tutolo before finding space and rushing for a 63-yard score to tie the game at 14. Following a PJP touchdown on the game’s next possession, UP quarterback Tyler Keyser found a streaking Ryan Kendra on a play-action, connecting with the senior receiver for a 39-yard score to tie it at 21. Whary then capped off a 21-point third quarter, finding the edge before just getting inside the pylon for a 28-21 lead entering the fourth.

Whary finished the game with 237 yards on a season-high 26 carries with Keyser finishing with four completions for 56 yards — all going to Kendra.

Upper Perkiomen will travel to No. 1 Pottsgrove on Friday night for a chance at the Class 4A title.

“It’s exciting and a challenge of staying focused, not panic,” Upper Perkiomen head coach Tom Hontz said of the mindset of playing in the playoffs. “We were down 14-0 and there were some people going, ‘What’s going on here?’ They didn’t panic, we kept pounding and it paid off. That start of the second half was key with Whary. He’s a heck of a ball player.”

Whary showcased his college-level skills, so did PJP senior quarterback Matt DeLaurentis, who showcased his escapability and accuracy throughout. He was instrumental in leading the Golden Panthers to two first-half scores — the first drive capped by a Jake Bildstein TD run (54 yards rushing; 115 yards on six receptions), the other scoring drive capped on a 10-yard screen pass, again to Bildstein.

Down 28-21, DeLaurentis’ magic continued as he drove his team down the field in the game’s final three minutes. However, a holding call negated a would-be 8-yard touchdown run by the quarterback before he threw the game-sealing interception two plays later, Trevor Stephen lurking in coverage before coming away with the pick on a low-thrown ball.

“In the first half I was sloppy with my coverage but towards the end I knew I needed to be out there and out for my team,” Stephen said. “When I saw him (DeLaurentis) rolling that way, I stuck with my guy, was holding him there and was waiting-and-baiting him to throw the ball. He did and I got the pick.”

“Matt’s a great player, and more importantly a great young man,” PJP head coach Rory Graver said. “He’s going to have a bright future playing college football somewhere. He’s been our catalyst on offense for the past two years and he’s done everything we could have asked for.”

As for Upper Perkiomen, they’ll look to make history again Friday night. Asked about their streak-snapping win on Saturday, Whary and Stephen had no words.