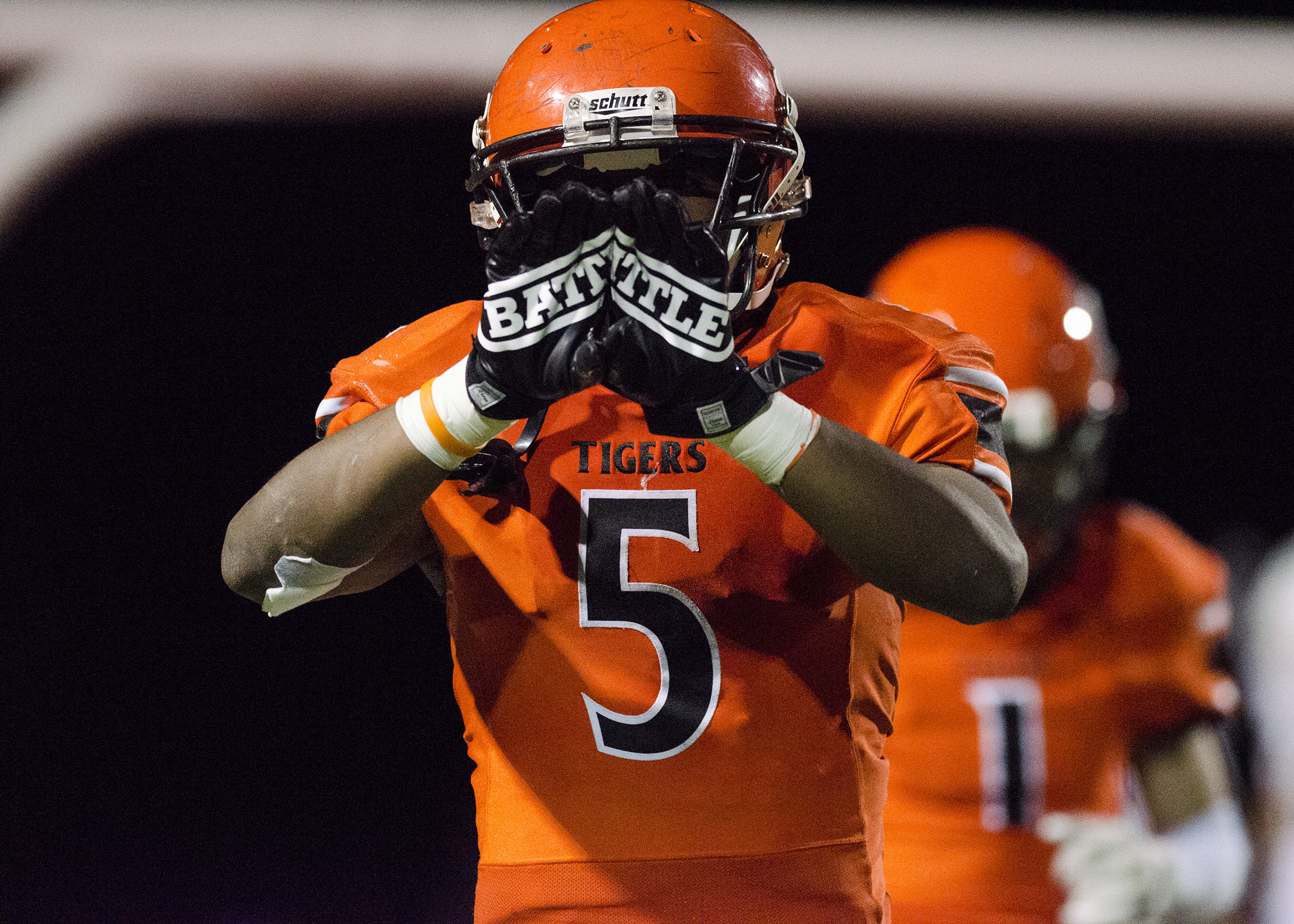 NEWTOWN TWP. >> With Delaware County’s all-time passing leader behind center, opposing defenses know where to focus on. Marlon Weathers likes to take advantage of that.

Marple Newtown’s running back rushed for 258 yards and four touchdowns Friday to lead the Tigers to a 42-13 victory over Oxford in the first round of the Class 5A Division 1 tournament. Marple Newtown running back Marlon Weathers ran for 258 yards and four touchdowns Friday as the Tigers downed Oxford, 42-13, in the first round of the District 1 Class 5A tournament. (Digital First Media/Rick Kauffman)

Success has become routine for the Tigers. On this night, they achieved it on the capable legs of their workhorse back.

“I gotta give it all to my o-line. Without them, none of this could’ve happened,” said Weathers, who didn’t tire despite 35 carries. “All the holes they made for me and protected Anthony (Paoletti) and stuff. Big shout out to them. They don’t really get the recognition. They’re like the heart of this team, the o-line.”

While Weathers’ yards came across the entire game, Marple Newtown’s points did not. It faced a 7-6 deficit midway through the second quarter before recovering a fumble deep in Oxford territory. From there, the hosts scored 29 straight points to enter halftime with a 35-7 lead.

Weathers cashed in the fumble with a five-yard score. Two plays after Kevin Hahn’s interception, Weathers raced 38 yards for another touchdown. The success on the ground freed up space for Paoletti, who hit Dash Dulgerian for a 15-yard touchdown late in the second quarter, then found Alden Mathes for an eight-yard strike just before halftime.

“That turnover was huge. Big play in the game,” Marple Newtown coach Chris Gicking said. “Obviously it was a great team win, but defense really stepped up. That team (Oxford) is a really good team, and that offense is unbelievable. They’re scoring points on everybody.”

The Hornets cut into the deficit in the third quarter, but Weathers waltzed in for a 21-yard touchdown run early in the fourth quarter to seal it. Marple Newtown receiver Dash Dulgerian, left, reels in a touchdown pass against ahead of an Oxford defensive back Friday. (Digital First Media/Rick Kauffman)

“I was in my zone,” said Weathers, who also had a 12-yard run to open the scoring.

He wasn’t the only one. Kyle Tobin had two sacks to break a program record. Dulgerian hauled in 11 receptions for 106 yards; he has 75 catches on the season, breaking the Delco single-season mark set by former Tiger Abel Hoff (72 in 2014), and vaulting past 1,000 yards for the season.

Not too long ago these kinds of statistics and this kind of winning would’ve been foreign to this program. But now?

“We didn’t get too excited because it’s something we expect,” Gicking explained. “A few years ago when we won our first (playoff game), it was the greatest. But now it’s — ‘We have work to do.’ We have Upper Moreland, it’s a really good team.”

The Tigers beat the Bears last season in the playoffs at home. The previous year, the Bears got them at their place. So, this will be the rubber match.

“This week is revenge week because my freshman year, we lost to them at their field,” Weathers said. “That was our game. It means more if we go there and beat them.”

Both of Oxford’s touchdowns came on passes from Chandler English to 1,000-yard receiver Brandon Deshields. Oxford rushed for 154 yards, and English passed for 102. The Hornets were very much in the game until those second quarter turnovers turned the tide.

Regardless, it was a memorable season for this program.

“They changed the culture of a program and a town,” Oxford coach Michael Means said. “It was special to watch.”

Shovlin gets No. 1 Springfield back in step against Penncrest
QB Gimbel shines in 2nd half, Upper Dublin downs Radnor in District 1-5A 1st round