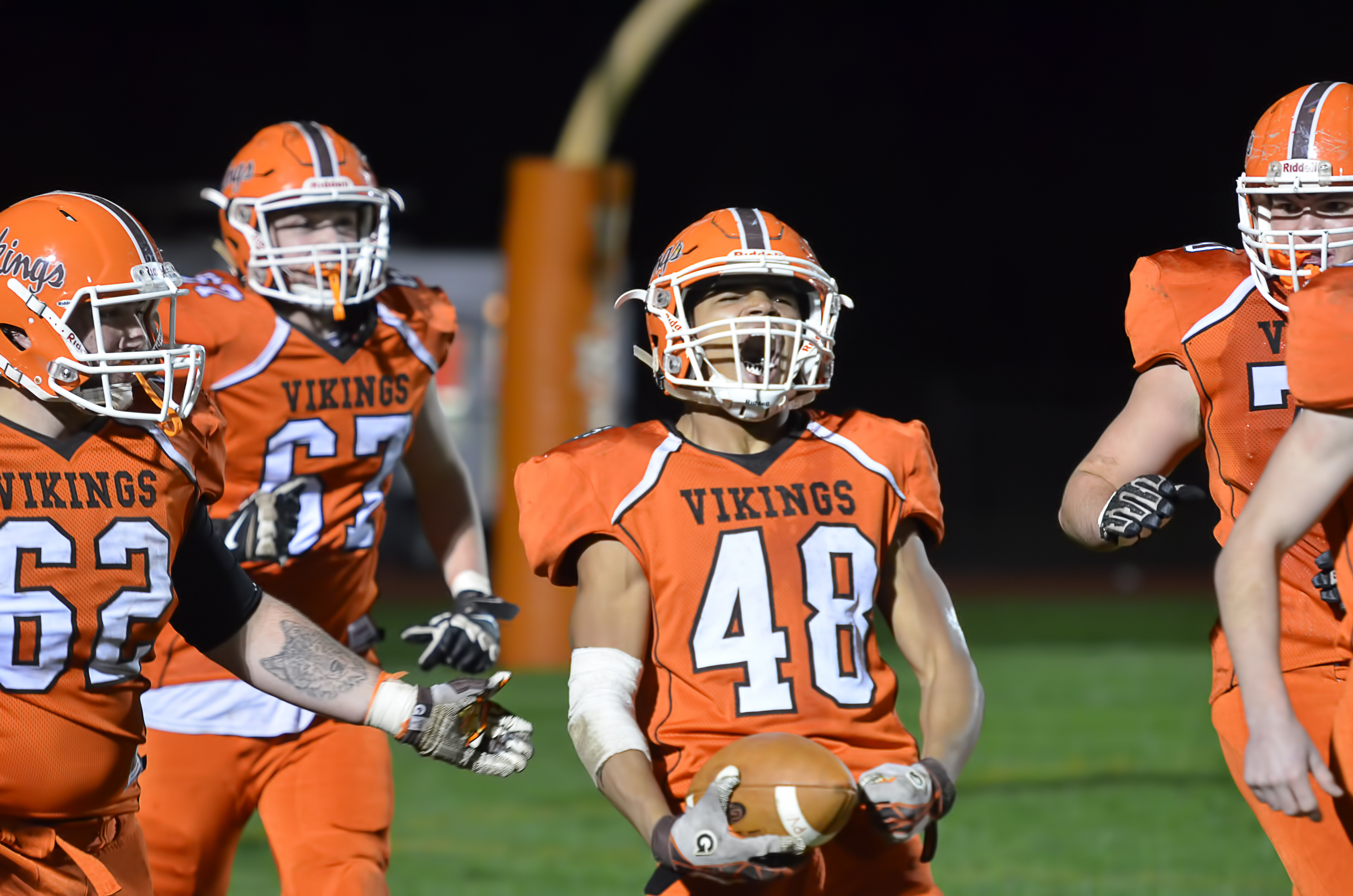 GRATERFORD >> Thrust into the starting tailback position in the second half, Perkiomen Valley’s Malik Smith II was the first to admit he didn’t know all the plays.

Didn’t matter. What he did know, proved even more valuable: how to find the end zone.

Filling in for an injured Jon Moccia, the junior linebacker/converted tailback rushed for 100 second-half yards and two scores as No. 2 Perkiomen Valley scored 24-unanswered points in the second half to down No. 15 Penn Wood 38-30 in the District 1 Class 6A opening round Friday night at Thomas J. Keenan Stadium.

“It felt good because all of the hard work we did at practice paid off. I let Cole (Peterlin) know that I didn’t know some of the plays and he was helping me out, getting me aligned and letting me know my assignments.”

A transfer from Norristown with seven rushes for 40 yards through the season’s first 10 weeks, Smith II got the call after starting tailback Moccia left with an undisclosed injury at the half. He didn’t disappoint. He first found the goal line midway through the third quarter, taking a handoff from Peterlin before patiently finding a hole up the gut and bursting through for a 43-yard score to cut a 16-point Penn Wood lead down to 10. He then capped his day in big fashion, again bursting through the middle of a worn down Penn Wood line en route to a 28-yard score and a 38-30 lead that Perkiomen Valley didn’t relinquish.

His yards, quite simply were vital. A complement to Peterlin’s 23-carry, 183-yard performance, the duo went toe-to-toe with a Penn Wood squad that was seeking revenge for its 55-28 loss to the Vikings last season. Revenge, the Patriots almost garnered. Desman Johnson Jr. threw for 247 yards and two scores, twice hooking up with the freakishly athletic Kennedy Poles (five receptions for 191 yards and two scores) as the team built a 30-14 lead through the early stages of the third quarter. With the Vikings on the ropes, however, the Patriots couldn’t land the knockout blow. The team’s next four drives went backward, the team combining for -19 yards as the Vikings staged their comeback.

“They made more plays than we did,” Penn Wood first-year head coach Ato Troop said. “This was a much more competitive game than last year and I’m proud of my kids for that. They fought for us all season long and this one could have went either way, and it just wasn’t our day today.”

Penn Wood pounced early, Johnson Jr., finding Poles on the team’s first possession for a deep-connection and a 91 yard score, one that gave the Patriots a 6-0 lead and Poles more than 1,000 yards receiving for the season (1,179 after Friday night). That lead swelled to 12-0 on the team’s next drive, Johnson capping off a 12-play, 68-yard drive with one of the more thrilling five-yard runs one will see in high school sports. The sophomore quarterback broke for the sideline, jumped up and over a defender before coming crashing down, the ball just breaking the goal line before becoming dislodged as he hit the turf. Trading touchdowns, Johnson again found Poles deep for a 35-yard score and a 24-14 lead entering the break.

“Coach Heist gave us an inspirational speech at the half and that got us motivated,” Smith II said. “We came out and we knew what we needed to do.”

“They punched us in the mouth that first half,” Peterlin said. “We went into the lockerroom at half, got corrected and got it going.”

Following Johnson’s eight-yard run to cap off a six-play, 64-yard drive, the tide started to shift in Perkiomen Valley’s direction. Smith’s aforementioned touchdown brought the game to 30-20 before Peterlin connected with Isaiah Domine (four receptions for 55 yards) early in the fourth in the corner of the end zone to make it 30-27. Mike Weir converted a 22-yard field goal to tie the game before PV forced a three-and-out and a punt. Starting at their own 41, the Vikings went down the field quickly with the help of a Peterlin 10-yard run and a 15-yard facemask penalty. With the team facing third and one, Smith II burst up the middle, eluding tacklers for the would-be game-winning score. Remy Sell and Kevin Lovett added a two-point conversion try on a botched field goal attempt to seal it.

Perkiomen Valley will host Pennridge in the Class 6A second round Friday night. Peterlin and company know that their best will be needed.
“We have to have our best week of practice,” Peterlin said. “These guys (Penn Wood) were great and they were a strong test.”

“We have to come out next week with that same fire we had in the second half,” Smith said. “We can’t have any letdowns.”