House Money: Owen J. Roberts playing with nothing to lose against Downingtown East 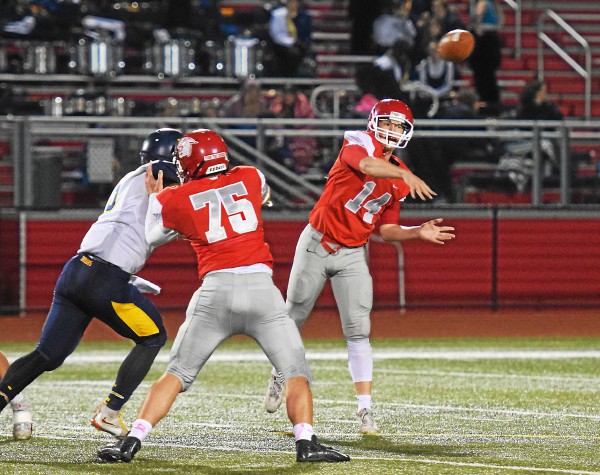 BUCKTOWN >> Owen J. Roberts head coach Rich Kolka knows not many will have the Wildcats picked to win in their first district playoff appearance in seven years.

But hey, playing with house money, that’s just fine with him as No. 12 OJR travels to face No. 5 Downingtown East at Kottmeyer Stadium Friday night at 7 p.m. in the opening round of the District 1 Class 6A playoffs.

“No one’s expecting us to win this game,” Kolka said, “and that’s just fine with me. We’re going to go out there and give it our best shot. I think we have a chance to win it.”

And why not? Owen J. Roberts has been the feel-good story in the Pioneer Athletic Conference as Kolka’s turnaround has come complete. Coming into the program three short seasons ago, he has effectively turned around a squad that had been mired in the middle of the PAC since the team’s one-and-done district appearance in 2010 and with the help of Dawson Stuart, Brendan Krumenacker and a steady Wildcats’ senior class, proved that hard work does indeed pay off.

“It’s kind of nice to see that the saying hard work pays off is staying true,” Kolka said. “These guys have been working hard for three years so it’s nice to see the results and I’m really happy for them.”

“Three years ago, it started with this group of seniors,” Stuart, a senior linebacker/quarterback said. “Now, this is what we looked forward to.”

A 6-6 season two years ago, and a 7-5 season last year paved the way for the Wildcats’ first visit to Kottmeyer Stadium since the 2010 playoffs, a 41-7 loss in the penultimate contest masking an otherwise successful 9-3 campaign (OJR would defeat Pottstown on Thanksgiving Day). Kolka doesn’t care about that result, he wasn’t donning the red and white yet. The players, they were middle school when that loss occurred. The only result that will matter will be Friday, and judging by the high energy and sense of calm amongst the players at practice, they are ready.

“Everybody is just super excited that we’re finally in the playoffs,” Krumenacker said. “That’s what is motivating us to have a good practice.”

“We know what we have to get done,” Stuart added. “They’re a good team and they want to pound it down your throat. This has been one of our best week of practices by far. We’re loose, but we’re still getting the job done and being serious when we need to be. It’s looking good.”

Downingtown East (9-1) comes into Friday’s contest ready to ground and pound against the PAC and District (Class 6A) top-ranked rush defense (78.7 yards allowed per game). A trio of backs in Garvey Jonassaint, Brassier Stocker and Tim Aivado will get the calls on the ground, all three coming into Friday night’s contest with more than 900 yards on the ground apiece. Stopping the ground game won’t be likely, limiting it like Coatesville did in handing the Cougars their only loss of the season (202 yards on 41 attempts), will be the key.

OJR is ready to do that.

“They’re big up front and they have good specials,” Krumenacker said, “we just need to buckle down.”

“If we stop their run, which is a lot easier said than done, I think we’ll be in good shape,” Stuart added. “We just need to remember it’s just another football game and we just have to treat it like that. We just have to play like we have played the last couple of weeks and we’ll be all right.”

A look at the other district playoff games this weekend:

A rematch of last year’s district first round that resulted in an ugly performance by the Patriots’ offense as the PV defense forced seven interceptions in a 55-28 victory. Penn Wood (8-2), making its second straight district playoff appearance after winning just five games through 2011-2015, returns a core nucleus of players that includes star receivers Rahiem Bowens (37 receptions for 723 yards) and Kennedy Poles (998 yards and 12 touchdowns in nine games). Quarterback Desman Johnson Jr. enters with 1,978 passing yards (he’d be first in Mercury Area) with 18 touchdowns to eight interceptions. PV (9-1) will look toward its defense to lead the way, as its defensive unit ranks second in points allowed (10.4 per game) and in passing yards allowed (91.8 per game).

How Penn Wood Got Here >> Patriots started the season with back-to-back losses to Souderton (37-14) and Pennsbury (41-18) before winning eight straight to close out the season, five of those coming in one score games.

How Perkiomen Valley Got Here >> PV’s defense has stepped up, allowing only one touchdown at home before last week’s PAC Championship game against Pottsgrove. In the PAC title game, the Vikings ‘D’ forced five turnovers — two returned for scores — and had a kickoff return for a score.

Neshaminy quarterback Brody McAndrew scans the field for an open receiver during a game against Truman. (John Blaine/ For The Trentonian)

The Rams and Redskins face off in the district playoffs for the second time in the past three years, the No. 13 Redskins dispatching the No. 4 Rams 31-16 in the then-Class 4A first round in 2015. The tables are flipped this year, however, with Spring-Ford entering the playoffs off a critical win against Pope John Paul II, while receiving some help from their Liberty Division counterparts. Spring-Ford senior quarterback TJ Pergine (151-for-277, 1,909 yards and 20 touchdowns) will face his stiffest test against a Neshaminy squad coming in winners of seven-straight games.

Leaderboard >> Neshaminy quarterback Brody McAndrew has passed for 1,702 yards and 16 touchdowns (three interceptions) in 2017. A balanced offensive attack has two runners with 400-plus yards in Joel Stills (101 carries for 731 yards) and Savion Hebron (69 for 407). Spring-Ford’s Justin DeFrancesco ranks second in the PAC with 1,128 rushing yards and 11 scores with Dante Bonanni the area’s leading receiver with 571 yards and four touchdowns.

Pottsgrove’s Rahsul Faison takes a carry around the edge earlier this season against Phoenixville. (Barry Taglieber – For Digital First Media)

It’ll be a rematch of last year’s final in the opening round as the Falcons (9-1) will look to repeat as Class 4A champs. Last year’s 27-26 overtime stunner was made for the motion pictures, but this year’s tilt leans heavily toward the burgundy and white. Pottsgrove is led by the district’s leading rusher in Rahsul Faison (252 carries for 2,432 yards and 36 touchdowns), who’s averaging a mind-boggling 9.7 yards per carry, and a defense that really just doesn’t give up points. If the Falcons can clean up their act after a turnover-heavy loss against Perkiomen Valley (five total), the team should be heading to their second straight title game.

Pope John Paul II and Upper Perkiomen both make a return to the district playoffs with one team assured of the program’s first district title berth. The Golden Panthers (7-3) are looking to right their path after dropping each of their past three games by more than three scores — allowing 40-plus points in each loss. Upper Perkiomen, winners of two of its past three games, will try to rebound after falling to OJR 31-6 in last week’s PAC crossover matchup.

Back on Track >> PJP will look for quarterback Matt DeLaurentis to get righted after throwing four interceptions in last week’s loss to Spring-Ford. The senior quarterback has thrown just nine all season but seven have come in the team’s past three losses. He looked excellent in the team’s loss to Pottsgrove in Week 9, throwing for four touchdowns and will need to replicate for PJP to stay in it with an Upper Perk team that will run, run and run some more.

A look at the other games this weekend: