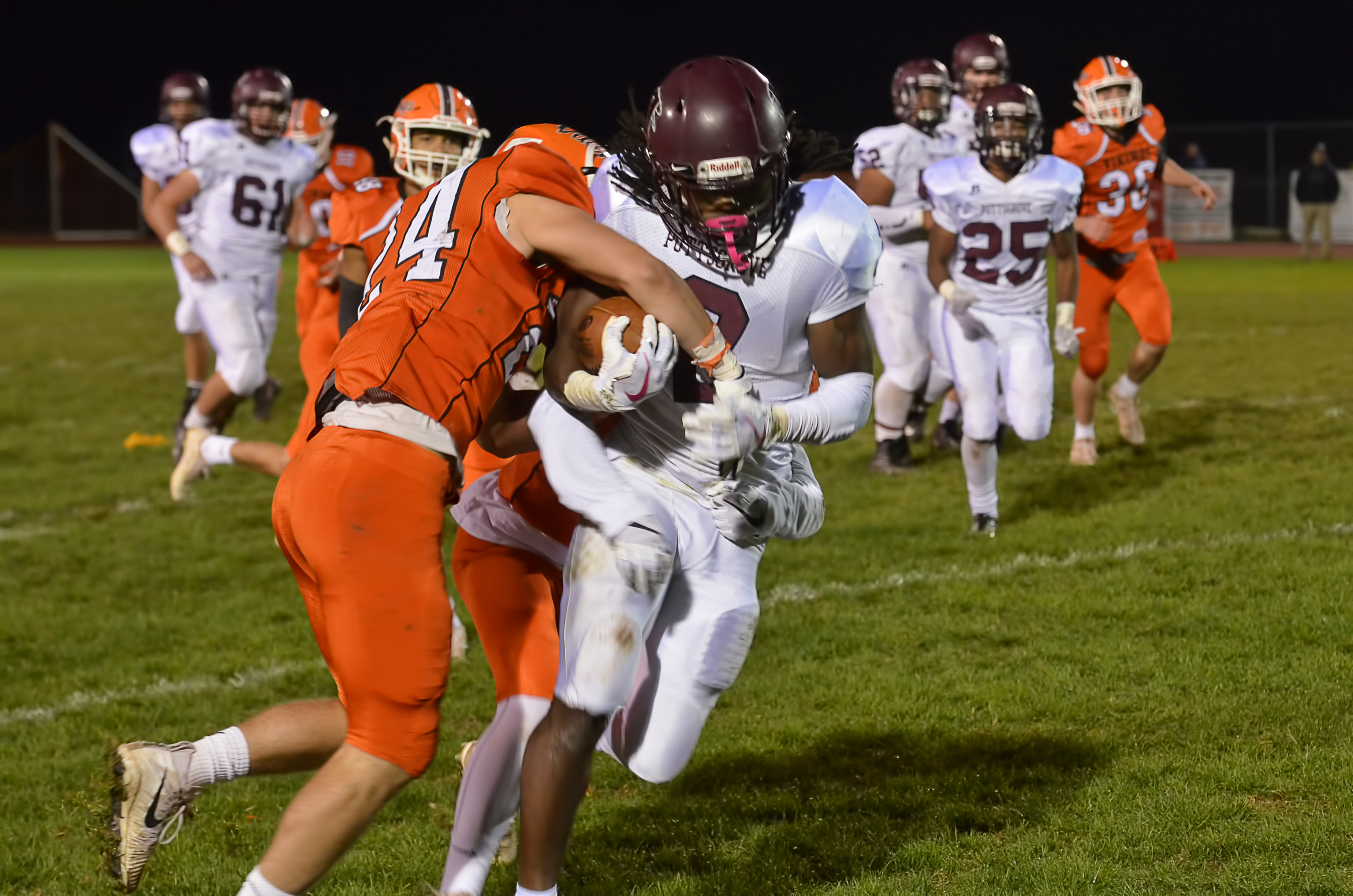 GRATERFORD >> The Perkiomen Valley seniors heard the talk and they took it to heart.

How would the Vikings fare with the departure of the program’s most successful class, one that guided them to two Pioneer Athletic Conference titles?

Guided by a defense and special teams unit that forced five turnovers and scored three touchdowns, Perkiomen Valley proved conference prognosticators that they are every bit as good as advertised, downing previously undefeated Pottsgrove 43-26 to win their second straight PAC title.

Perkiomen Valley entered the week ranked No. 4 in the District 1 Class 6A rankings and will maintain the right to host a home playoff game next week.

A 5-0 blitz through the PAC Liberty’s Division quelled doubts. Friday night’s performance put them to rest. Aided by the return of senior defensive end Alec Jackson, the Vikings (9-1 overall) were able to withstand a Falcons team that racked up 334 yards and 27 first downs and overshadow a 218-yard, three-touchdown performance from star running back Rahsul Faison.

It started with Ryan Cerula’s 89-yard kickoff return to start the game and then was highlighted by Schimpf’s 92-yard pick-six followed by Brian Fehr’s 50-yard fumble return on back-to-back possessions in the second quarter led the Vikings to a 28-13 halftime lead. The third quarter saw Schimpf pick up another interception while the defense forced a safety on the next possession after the Pottsgrove punter kicked the ball out of the back of the end zone as he was trying to corral a snap that went over his head.

“I just dropped back to my zone and the ball just found me and it went from there,” Schimpf said of his TD interception return. “I started following Faison on the crosser, the quarterback under-threw it and it came me and gave me the perfect opportunity to go down the sideline.”

Remy Sell’s interception in the fourth quarter set up the game-sealing touchdown. Starting at their own 7-yard line, Cole Peterlin (3-for-5, 130 yards) rolled left into his end zone before throwing across his body to a wide open Jackson, who stiff-armed one Pottsgrove defender and outran another en route to a 93-yard score and a 43-19 lead.

“It was just a crosser,” Jackson said. “Isaiah Domine really helped me out, knocking out those two kids and I was able to get the stiff arm and go. We faked them all to the left and I got open.”

Peterlin’s 93-yard touchdown pass doubled the team’s offensive output to that point as the team was held to only 55 yards of offense through the first three-plus quarters. The Vikings had run nine total plays in the first half, three on a 63-yard drive that was capped by a Jon Moccia 10-yard run. Moccia was the team’s leading rusher with 24 yards on six attempts and two scores, his second capping off a three-play drive that started via a Schimpf interception.

“Our defense has been incredible all year, PV head coach Rob Heist said. “We really lean on them. Everyone knows the type of football Pottsgrove plays. They’re going to run it and pound it on you and grind on you. They did a nice job of keeping the ball out of our ‘O’s’ hands. But when it comes down to that, when you do get opportunities you need to be efficient with the ball and I think on offense, when we did have the ball, we did a nice job.”

Pottsgrove’s Javon Colbert and Elijah Chhuor supplemented the ground game of Faison in fine fashion. Colbert ran for 53 yards and a score on 11 touches with Chhuor adding 50 yards on eight carries. The Falcons, which never led but trailed by only one in the second quarter (14-13), will host Interboro in the first round of the District 1 Class 4A playoffs.