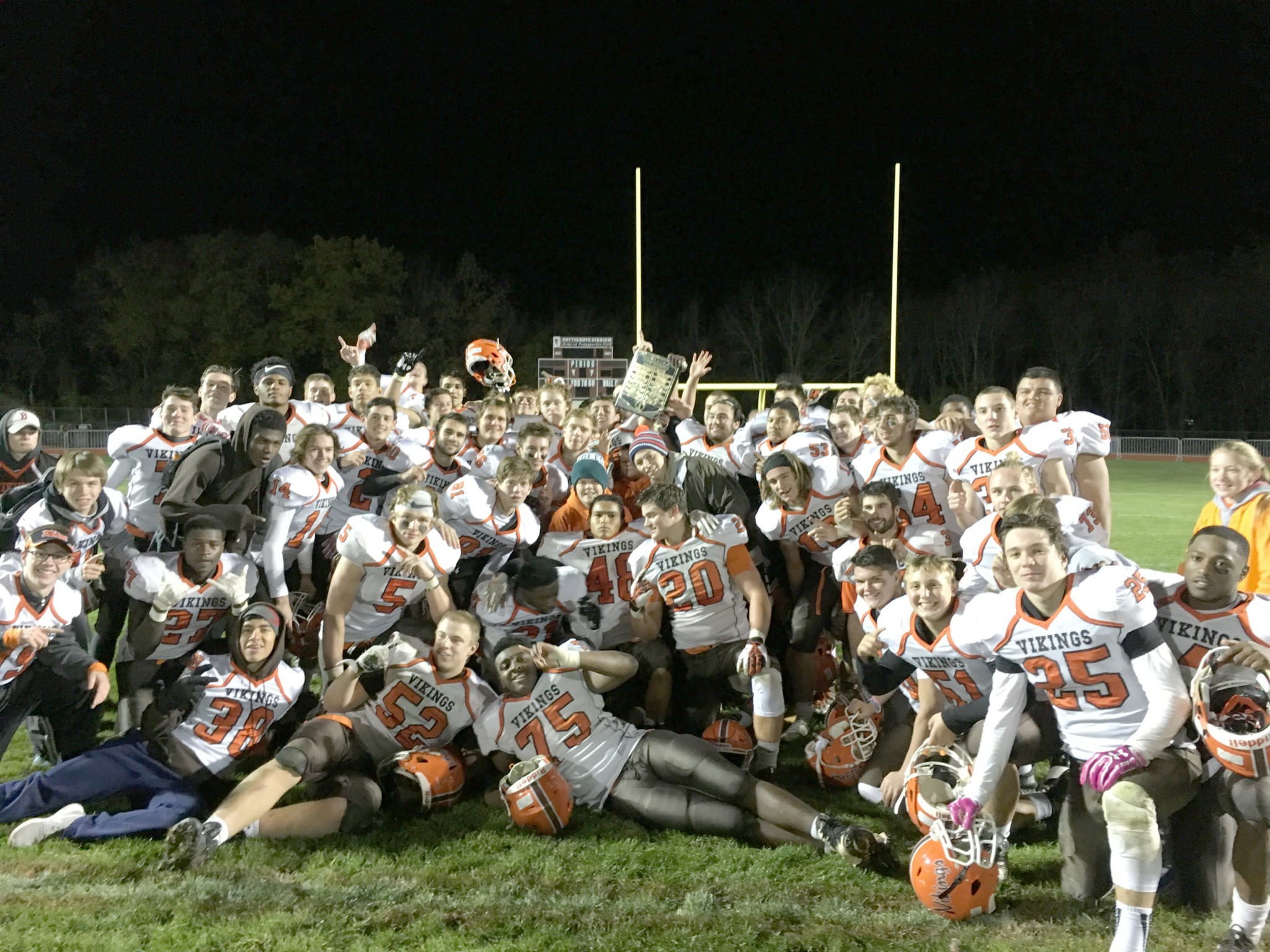 GRATERFORD >> Standing in the wake of the departure of Perkiomen Valley football’s most successful senior class, second-year head coach Rob Heist offered one simple remark as he talked to his blend of youth and veterans in the preseason.

Heist’s words have rung true in 2017 as his Vikings have blitzed through the Liberty Division yet again, earning a spot in the Pioneer Athletic Conference title game against reigning Frontier Division champ Pottsgrove Friday night at Thomas J. Keenan Stadium.

“Coach Heist told us in the beginning of the season that we don’t rebuild, we reload,” Perkiomen Valley senior Kevin Delacruz said. “I’m speaking for the whole team here because they believe the same, but that really resonated with us the whole season. We’ve gone into each game with the same mentality. We all believed that we would end up in this spot like we did last year. Our senior class last year was incredible and we want to match what they did and build off of that.”

“This team, we’ve been able to fight,” added senior receiver/defensive back Remy Sell. “We lost a lot but we were able to battle back. Many people didn’t think we were going to be back in this position but we surprised them all and we’re ready to play another great team. Pottsgrove deserves to be back. It should be the best game of the season.”

It’s hard to argue with the results. The Vikings (8-1), minus a hiccup in Week 3’s 28-0 loss to Pennridge, have looked as every bit of a championship contender as ever. Seeking the team’s second straight PAC title and third in the past four seasons, the Vikings enter with the league’s third-best offense in points per game (31.8) and yards per game (343.1). Junior dual-threat quarterback Cole Peterlin has been strong all season long, throwing for 1,435 yards and 11 touchdowns (six interceptions) — good for third best in the PAC. His 646 rushing yards (seven touchdowns) also rank best among area quarterbacks. He, along with a stable of solid receivers in Sell, Isaiah Domine and do-it-all backs Jon Moccia and Brendan Schimpf, will look to go score-for-score against a Pottsgrove offensive attack led by the running of 2,000-yard senior back Rahsul Faison and a defense that is No. 1 in the league in terms of total yards allowed (173.9).

Senior guard Willie Mathis and an improving offensive line (Nicco Carfagno, Will Marotta, Gavin Euker, Zach Brewer) under the captainship of Jahir Holmes are ready for the task.

“Pottsgrove is really good, we’ve seen what they’ve been doing all season,” Mathis said. “This is definitely going to be a big test upfront. They have a great defensive line that are extremely physical.”

Already with a District 1 Class 4A title to their name, the Falcons are eager to obtain a title plaque that hasn’t been in their hands since the 2013 season — an eternity for a Rick Pennypacker squad that is seeking its fifth title since the 2008 season.

“It’s our last year and we want to be remembered for something,” senior Ephraim Hurt-Ramsey said. “Coming off the district title last season, getting this PAC title will be big for our senior class.”

The Falcons enter Friday night ranked No. 1 in the league in points per game (47.3) and total yards (415.7) and boast Faison, a Stony Brook commit who has already surpassed his rushing total of last season. He’s rushed for 2,217 yards and a PAC-record 33 touchdowns and has hit the 300-yard mark in two of the past three Falcon wins. Stopping … containing Faison will be the obvious goal for the PV defense, which has allowed just seven points at home all year, but Falcon offensive linemen Hurt-Ramsey and Parris Janusek are ready for the task of letting him run wild.

“We know the talk is about Rahsul and how teams want to stop him,” Hurt-Ramsey said. “The offensive line wants to show what they can do.”

“We just have to come out tomorrow and play our brand of football,” Janusek said. “We have to go out and do the small things correctly and just play to the best of our abilities and intensity that we need to play with.

Now a look at the other games this weekend:

The importance of this game can not be understated for a Spring-Ford (5-4 overall) squad that enters ranked No. 17 in the latest District 1 Class 6A Power Rankings. A win over cross-town PJP (7-2 overall) is imperative to keep their playoff hopes alive. A loss and it’s over. PJP doesn’t have that weight added to Friday’s game as the Panthers are assured a spot in the Class 4A playoffs. However, defeating their Upper Providence foe is plenty of motivation for PJP, especially after two consecutive losses (Upper Perkiomen 41-14, Pottsgrove 63-27) knocked them out of the PAC playoff race.

Big Guns >> Spring-Ford’s TJ Pergine became the third Rams quarterback to throw for over 4,000 yards in a career, joining Trevor Sasek and Hank Coyne in the record book. Pergine has been sensational in leading a youthful Rams team, throwing for a PAC best 1,669 yards and 16 touchdowns. PJP’s Matt DeLaurentis’ stats almost mirror that of Pergine’s. The senior escape artist with a incredibly accurate arm has thrown for 1,658 yards and 16 touchdowns to five interceptions (same as Pergine).

Get the Ground Going >> Spring-Ford has been limited to under 100 yards rushing in three of their losses (68 vs. Wilson, 71 vs. Perkiomen Valley and 79 vs. Owen J. Roberts). PJP hasn’t finished with more than 100 rushing yards as a team since compiling 153 yards in an OT win against Phoenixville. The past three games have yielded just 69 yards on the ground (PJP is 1-2 in past three weeks).

No. 2 vs. No 3. >> Spring-Ford boasts the area’s No. 2 leading receiver in Dante Bonanni (32 receptions for 521 yards). PJP’s Dan Cirino, who’s been gutting out an injury for the past two weeks, is right behind with 26 receptions for 451 yards.

To Run, or Not to Run

Look no further than Owen J. Roberts (7-2) and Upper Perkiomen (6-3) as they square off in the No. 2 vs. No. 2 matchup in Bucktown. The Wildcats are coming off their best win of the season in a 33-0 shutout of Spring-Ford, while Upper Perkiomen is riding a two-game winning streak. The intrigue? Look no further than the Wildcats’ front seven vs. Upper Perkiomen’s three-headed rush attack of Tyler Whary (101 attempts for 803 yards) Tyrese Reid (63-521) and Austin Tutolo (62-452), who have been nearly unstoppable of late, rushing for at least 300 yards in three of the team’s past five games. OJR’s defense has allowed a 100-yard rusher once this season (Jamison Moccia four carries for 117 yards in Boyertown’s 24-21 win) and has limited opposing rush attacks to a PAC-best 75.1 yards per game.

Big Bruisers >> Two big backs will be featured in this one as Boyertown senior Marcus Thomas (6-2, 220) leads the Bears’ option attack. He’s rushed for 718 yards and six touchdowns on 153 touches. Phoenixville junior Travis Pannella (5-10, 175) ranks fourth in the PAC in rushing, having run for 737 yards and five scores on 163 carries.

How Phoenixville gets into district dance >> With help. The Phantoms stand No. 18 in the playoff race but only seven points away from No. 16 Kennett. A Kennett loss plus a Glen Mills loss paired with a Phoenixville win should have the Phantoms leapfrogging into the last spot.

Twice for the Money

Schedule quirks were inevitable when the PAC split and adopted a crossover Week 10 format. Well, that stays true this year as Pottstown travels to Methacton (again), while Upper Merion travels to Norristown for an appetizer before their big feast on Thanksgiving Day. Pottstown defeated Methacton in Week 4 of the season, hanging on as the Warriors were 17 yards away from potentially taking the lead and the win in the final seconds. Since then, the Trojans have had little to celebrate, losing their past five contests while scoring more than six points just once in that span (13 vs. PJP). Methacton is just looking for a positive finish on an incredibly trying season. Meanwhile, Norristown is looking for a bounce-back win after a last-second loss via the Hail Mary to Boyertown as Upper Merion looks to win its second out of the past three after starting the season 0-7.

Elsewhere around the area

• Perkiomen School (4-2 overall) travels to face Pennington School Saturday at 1:30 p.m. Perk is coming off a bye week after a 50-26 victory over Academy of the New Church. Pennington (2-5) has dropped three straight after starting the season 2-2. Perkiomen wins 35-27.

The Delco Football Podcast gets you ready for Week 10
Delco Football Players of the Week: Chichester Profitt-ed in win over Chester
Loading Comments...
Comment
×