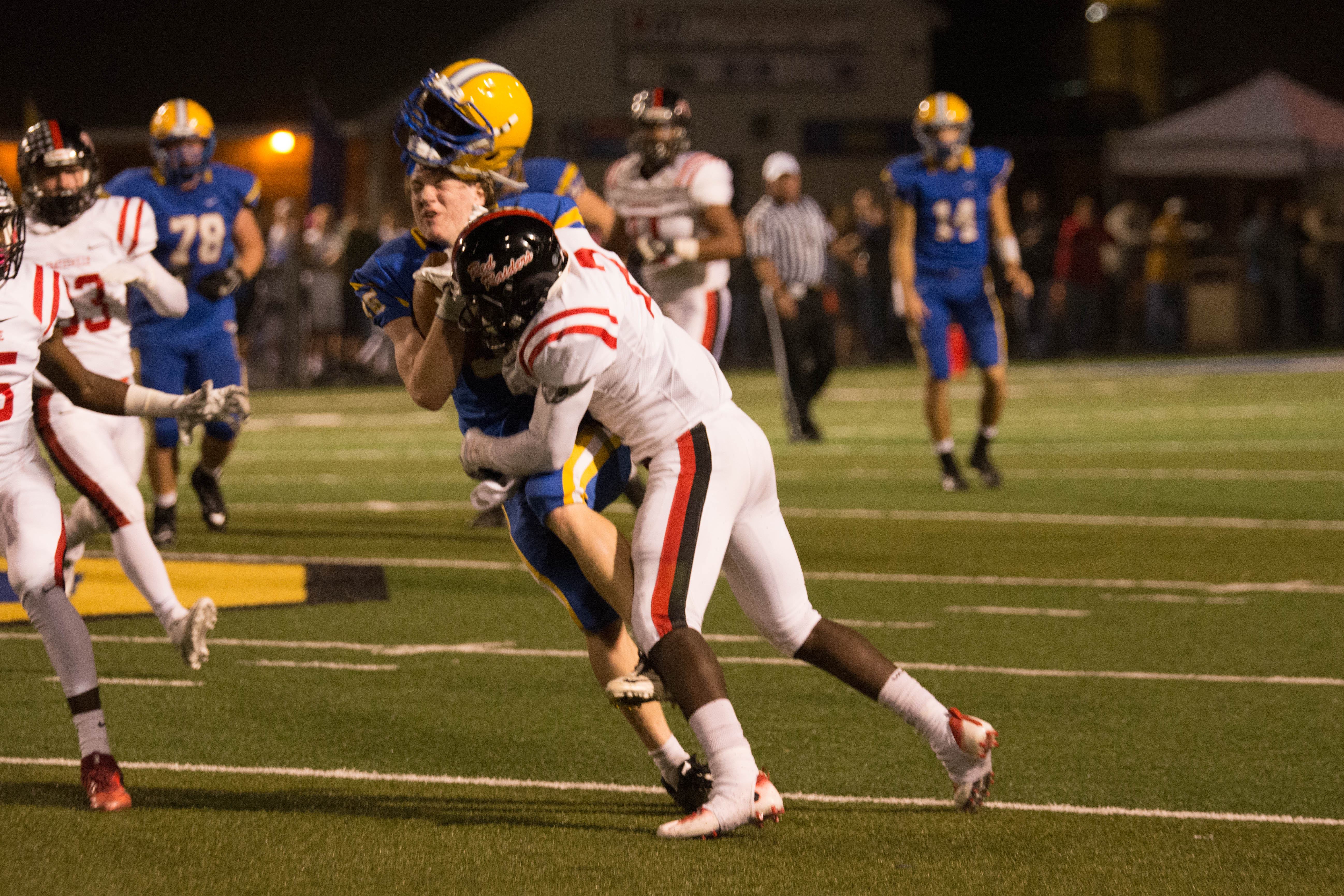 DOWNINGTOWN >> The Ches-Mont League game of the year had already lived up to the hype, and then some, as Ricky Ortega and Coatesville lined up for one last play, trailing by a single point.

Seconds later, the game of the year became a game no one will ever forget.

Ortega hit receiver Dapree Bryant with a beautiful, lofted 25-yard touchdown pass down the right sideline with just three seconds left on the clock, sending the visiting fans at Kottmeyer Stadium into a delerious celebration on the way to a 38-27 win Friday night.

The touchdown actually gave Coatesville, ranked fifth in the most recent Pa. Prep Live Top 20, a 32-27 lead. But No. 4 Downingtown East fumbled on a desperation kickoff return as time expired, leading to a garbage-time touchdown and the final margin.

“When they scored with 49 seconds left, there was no doubt we would come back and score,” Ortega said. “We just knew we had too many playmakers for them to stop. We had Aaron Young run the safety off and I hit Dapree in the end zone with the pass. He is the absolute best receiver in the state and he got the job done tonight when we needed it.”

It looked like Downingtown East (4-1 Ches-Mont, 8-1 overall) had the game won when Brassir Stocker scored on a three yard run up the middle on a fourth and one play with 49 seconds left in the fourth. But much like NFL fans who say “you left too much time for Tom Brady,” the Cougars left too much time on the clock for the electrifying Coatesville (5-0, 8-1) offense.

The Cougar defense had played well all night and it looked like Coatesville was in trouble until the late heroics.

Coatesville now has clinched at least a tie for the Ches-Mont National Division title, and can win the title outright with a win next Friday at home against Bishop Shanahan.

“We ran the ball pretty well to start the game, but then they clamped down on us,” Aaron Young said. “But, we knew we would score after they did. It’s just us that way. We are a real family and we stuck together. They had Stocker spying me the whole game tonight.”

The game was a sight to behold before an overflow crowd at Kottmeyer. The hitting was ferocious and the two teams showcased their athletes and showed why they are two of the best Class 6A teams in the state.

Coatesville rushed for 268 yards and Ricky Ortega threw for 176 more as the vaunted Coatesville offense did its job, but the Red Raider defense — which was the second-ranked 6A unit in District 1 by allowing just nine points per game — did not hold the Cougars down as Downingtown East totaled 334 yards of total offense.

East more than held its a own, thanks largely to a big night from junior running back Garvey Jonassaint, who rushed for 110 yards on 15 carries and had touchdowns runs of 25, 23 and 10 yards.

The game was tied at halftime and the Cougars took a 21-14 lead when Jonassaint burst through a big hole in the middle of the Red Raider defense to score. Coatesville came right back on a long drive of its own with the big play being a third down completion to Avery Young for 34 yards and a first down at the Cougar three yard line.

Two plays later, Ortega went in from a yard out, but Coatesville missed the extra point and Downingtown East had a 21-20 lead.

Coatesville kept the pressure on the Cougars and Downingtown East responded after a Bryant three yard touchdown run early in the fourth period, going on a four minute, 32 second drive that culminated in Stocker’s touchdown.

“Our kids played their hearts out,” Downingtown East head coach Mike Matta said. “But, we always play that way. I know our kids deserved better than that tonight.”

Coatesville head coach Matt Ortega looked drained after the hair-raising win, and was impressed with his club’s resilience.

“This was a great game and that last touchdown play shows what kind of team this is,” Ortega said. “They are a tough group that plays for each other and they did that again tonight.”