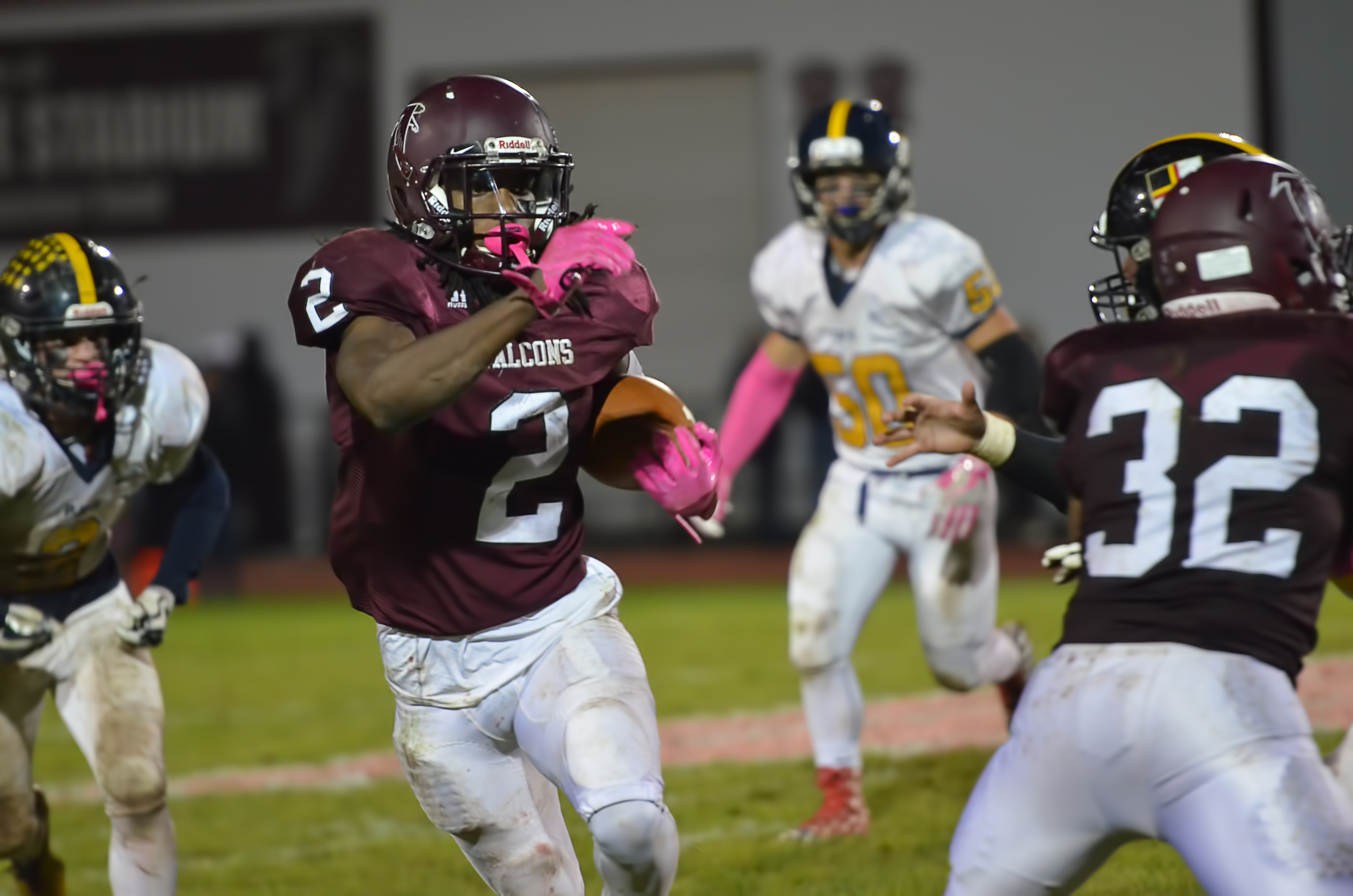 POTTSGROVE >> Pottsgrove safety Bailey Delp said that there was no worse feeling than getting back onto the bus after a stunning defeat at the hands of Pope John Paul II.

Nearly a year to the day later, all that can be forgotten.

Rahsul Faison shattered the Pioneer Athletic Conference mark for most rushing touchdowns in a season as the Falcons scored a season-high nine touchdowns in a 63-27 victory over the Golden Panthers Friday night on the Falcons’ Senior Night and Breast Cancer Awareness Game.

The win solidifies the Falcons’ (5-0 PAC, 9-0 overall) spot in their second straight Pioneer Athletic Conference game, where they will again face Liberty No. 1’s Perkiomen Valley. Faison and a dominant front seven are keys behind why. Faison, a Stony Brook commit, shattered the mark for most touchdowns in a season of 30 (Ryan Brumfield, 2010) with his third six-touchdown performance in the last four games. His most memorable touchdown run came in the third quarter where he left a wake of would-be tacklers in his dust — breaking seven in all — in the midst of a 48-yard run to make it 35-14. Held to just 28 yards in the first quarter, Faison finished with 301 yards on 28 carries, his second such 300-yard effort in the past four games.

“We just had to go into the lockerroom and adjust to what they were giving us,” Faison said of his slow start. “That’s exactly what we did and once we started running power they couldn’t stop us.”

“Rahsul, what do I say about the kid?” Pottsgrove head coach Rick Pennypacker said. “Unbelievable, he’s been doing this for us all year.”

The defense did its part as well, sacking quarterback Matt DeLaurentis four times while limiting a Golden Panther ground attack to a season-low -16 yards. DeLaurentis did get his, however. The senior gunslinger showed his penchant for the big-time play, with four beautifully thrown touchdown passes — all going 15 yards or more. His 68-yard screen pass to Jake Bildstein (five receptions, 135 yards, three touchdowns) tied the game at seven early before he got the team back into the game with a 15-yard pass — again to Bildstein — to make it 28-14 at the half. DeLaurentis finished with 246 yards on a 14-of-34 effort and now stands 614 yards away from breaking David Cotellese’s school single-season passing mark of 2,277 yards.

“Hats off to PJP, DeLaurentis, Bearden and Bildstein,” Pennypacker said. “They’re tough kids and they did a great job. I knew they were going to get some because we were taking chances on coverage, trying to bring pressure and put some guys on islands. DeLaurentis made some pretty great throws.”

Unfortunately for PJP, Pottsgrove just made too many plays.

Faison got the scoring going with a 5-yard run before quarterback Jay Sisko answered a PJP touchdown with a deep ball of his own, connecting with Malik Garner for a 66-yard score and a 14-7 lead. Kobey Baldwin then added his name to the scoresheet on the next possession with a 58-yard punt return for a 21-7 lead before Faison’s 2-yard run extended it to 28-7 with 1:04 left in the second.

“I usually get good yards but coach gave me the go, he said ‘go with it,’” Baldwin said of his punt return. “I got a few good blocks, saw a crease and just went with it.”

A tug of war for momentum started in the third with Faison’s aforementioned 48-yard score quickly answered by a DeLaurentis fade to Ricky Bearden (three receptions, 45 yards). Faison then broke free on the edge for a 35-yard score and a 42-21 lead before DeLaurentis found Bildstein on a deep ball for a 30-yard score to bring the lead back to two scores.

From there, though, it was all Pottsgrove. Faison scored his fifth touchdown of the game on a two-yard plunge that was set up by a 56-yard run the play before. He added his sixth minutes later after breaking through the line before ducking down, staying low and crossing into the end zone for an 11-yard score to make it 56-27. Sisko then added the capper with a 36-yard run on a bootleg early in the fourth.

Sisko finished with 80 yards passing on a 4-for-7 effort. He added 46 yards on the ground on six carries.

“We knew what we needed to do to win,” Faison said. “We came out here, executed and jumped on them from the go.”

“Our kids really, really played pretty physical football,” Pennypacker said. “I wasn’t happy with our penalties or some of the other things but other than that my kids played pretty well.”

NOTES >> Pottsgrove was penalized 12 times for 135 yards; PJP flagged eight times for 68. Pottsgrove — +9 in turnover differential entering Friday, forced four turnovers. The Breast Cancer Awareness game holds a special place for Pennypacker, who lost both of his parents to cancer.