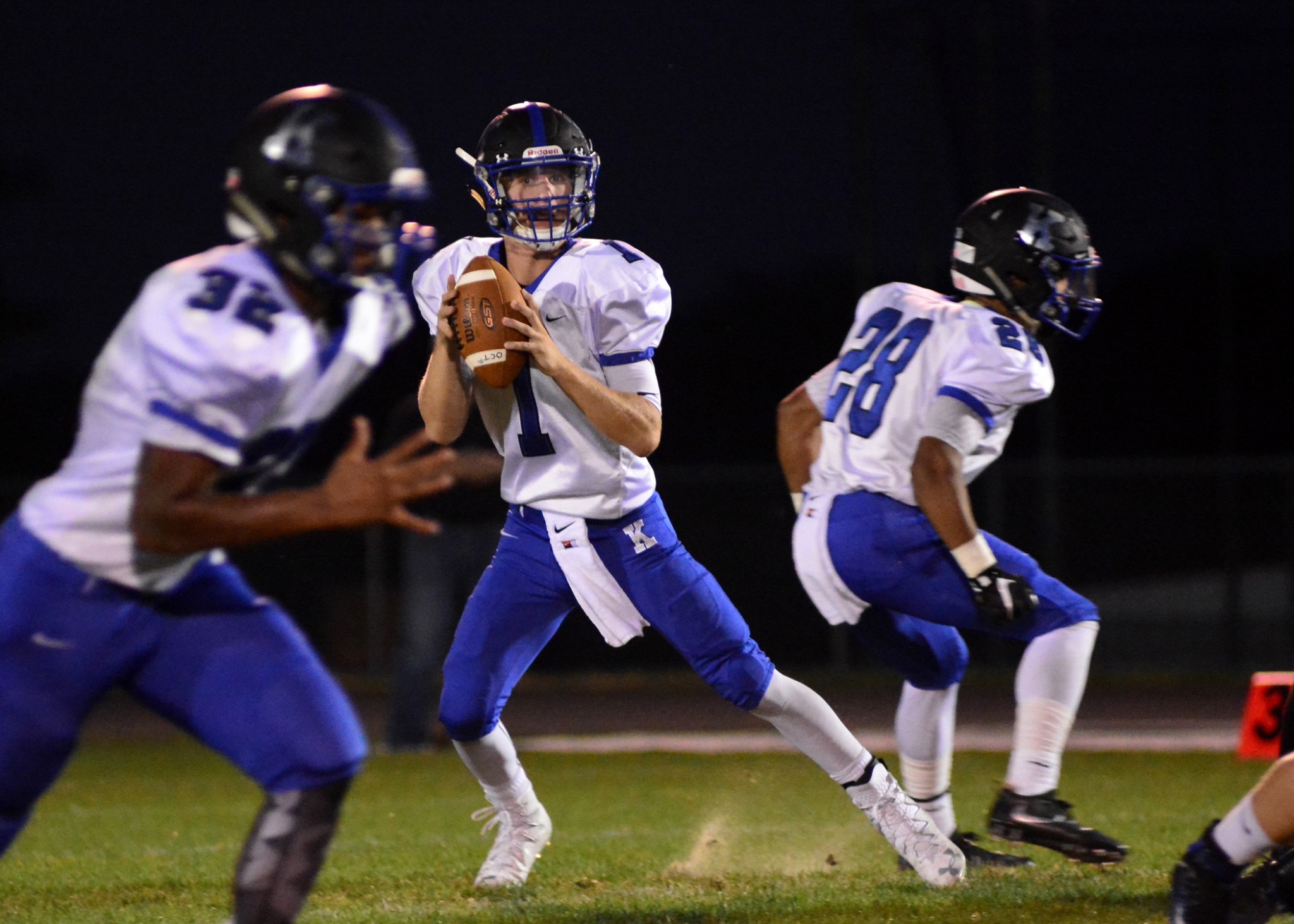 KENNETT SQUARE – When Octorara and Kennett squared off on the football field, the opposing sides were a mirror image of one another. The records were identical heading in — both overall and within the Ches-Mont American. And both were riding five-game losing streaks.

The big difference on Friday was that the host Blue Demons had a unique two-way threat on their side with quarterback Jake Dilcher. The senior threw for well over 100 yards, ran for another 100-plus and accounted for 22 points as Kennett topped the Braves, 46-20.

“It’s been a while, but we didn’t forget (how to win),” said Dilcher, who missed a chunk of the season with a shoulder injury but is now back and healthy.

“This was Senior Night so there were a lot of people here, so there was a little extra pressure to win, and we looked good in front of them,” added Demons head coach Josh Kaufman. “I’m happy for our kids.”

Thanks to a couple early turnovers and the running of bruising sophomore Garrett Cox, Kennett raced out to a 28-0 lead. As a result, the Demons grabbed their first win since Sept. 7th and improve to 1-4 in the Ches-Mont American (3-6 overall).

Cox finished with a career-high 136 yards on 26 carries and scored a pair of touchdowns. Add in Dilcher’s 101 rushing yards on seven attempts and Kennett outgained Octorara 275-122 on the ground.

“I’ve probably been a little too pass-happy (this season) because Jake has those capabilities and we have some depth at wide receiver,” Kaufman acknowledged. “(Octorara) was in a 3-4 defense and we exploited a couple things and we were able to create some creases.

“Garrett ran the ball very well, Greg (Brison) ran it well and so did Jake. It was kind of a three-headed monster.”

Frustrations were clearly mounting for the Braves (0-5, 2-7), on the other hand. At one point in the second quarter, with Kennett ahead, 28-0, Octorara was whistled for three personal fouls in four plays, which promoted head coach Jed King to gather the entire squad together for a talk.

“My kids are better than that and they know better,” King said. “They were passionate and I understand that, but you can’t win games giving them 15 yards here and there.”

The Blue Demons’ defense opened the scoring when Danny Mancini picked off Trent Pawling on Octorara’s second play from scrimmage and raced 23 yards to the end zone. Kennett made it 14-0 late in the first period when Cox plowed in from the one to cap an 11-play drive. Kennett converted a third-and-28 during the possession when Dilcher found Mitch Kosara for a 34-yard gain.

A 37-yard Dilcher run set up  a short scoring burst by Brison, and then moments later following a Braves’ fumble, Dilcher scored on a six-yard keeper.

“Turnovers always burn you and we couldn’t stop (Kennett’s) inside run,” King said.

“We lost our heads too many times in that first half. If we would just focus on things we can control, we wouldn’t have given up that many points in the first half, and then we would have been in this ball game.”

Octorara scored late in the first half (on a 13-yard screen pass from Pawling to Sye Hall) and early in the second half (on a 22-yard connection between Pawling and Nick Mattingly) to slice the margin in half, but the Blue Demons quickly responded. Cox ran it in from eight yards on fourth down and Dilcher found Chris Brooks for a 31-yard scoring strike to make it 40-14.

“When we are able to move the ball on the ground it opens up things in the pass,” Dilcher said.

“The coaches trusted me, the holes were there from my linemen and I just worked,” Cox explained.

Kennett is still in the running for a berth in the 5A District Playoffs but would need to upset West Chester Rustin in the regular season finale to have a chance.

“Since I got here I’ve talked to them about being in the moment,” said Kaufman, who is in his first season at helm. “And recently the theme was to do the next right thing.

“Somebody who is wise told me it’s never too late to do the right thing. We are far along this season, but I told them that good things can happen if we just focus on doing the next right thing.”

The Braves will wrap up the season next Friday at Oxford. It will mark the last Ches-Mont contest for Octorara, who is moving to the Lancaster-Lebanon League starting in 2018.

“I am excited to start in the Lancaster-Lebanon League, but the Ches-Mont is a very good league,” King said. “The coaches are awesome, they play good football and I just can’t say enough about this league. We were lucky to be a part of it.”