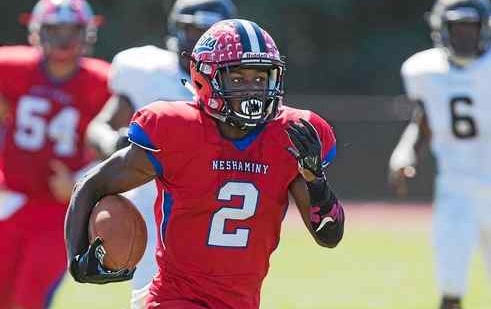 Neshaminy running back Joel Stills breaks through the line for a touchdown during the first quarter of a game against Truman. (John Blaine — For PaPrepLive.com)

No matter what happens Friday night, the Pennsbury and Neshaminy football teams are now both assured they will play for at least a share of the Suburban One National League championship when they collide next week.

Whether the winner of next week’s game between Truman and Bensalem will result in one of them getting the school’s first playoff berth is unclear.

All in all it shapes up as a very interesting weekend of football in Lower Bucks County with Pennsbury and Neshaminy both facing games that have to be viewed as more than potential traps.

Pennsbury will travel to Abington, which nearly beat Neshaminy a few weeks and is coming off an impressive defensive effort in which shut out high-scoring Truman. Just two weeks ago Truman put 32 points on the board against Pennsbury, albeit in a losing effort.

Neshaminy, meanwhile is at Council Rock South. The Golden Hawks are virtually out of the playoff picture, but they did put up a pretty stiff battle in a 25-14 loss against Pennsbury last week and a victory over Neshaminy would go a very long way in terms of salvaging their season.

Also Friday night, Truman will host Souderton and should the Tigers win they will be up to six wins and in pretty good shape heading into the Bensalem game. Bensalem is at Rock North Saturday afternoon and needs to win out after coming up just short of qualifying for the playoffs last year.

Pennsbury (7-1) at Abington (4-4), Friday, 7 p.m. >> Although the Falcons are already assured of a playoff berth, Abington is still not out of either. And the reason is the Ghosts would pick up huge power points if they could beat Pennsbury and North Penn next week. Obviously, the key to stopping Abington is putting the clamps on standout running back Darryl Davis-McNeil. Last week against Truman he ran for 220 yards on a whopping 42 carries and scored both touchdowns. The fact Abington was able to keep Truman for scoring at all is also eye-opening. Ranked No. 1 in the area, Pennsbury has had its share of struggles at Abington overs the years and needs to be ready to play four quarters in order to take an undefeated league record into the home game against Neshaminy.

Neshaminy (7-1) at Council Rock South (3-5) , Friday, 7 p.m. >> Neshaminy’s offense was really clicking in a wild win over Bensalem last week in which it ran for 375 years, including 225 by Joel Stills. On the other hand, it also gave up 27 points and 501 total yards against Bensalem, including 215 by Owl running back Rob Harris. Led by quarterback Christian Jabbar, Rock South can move the ball and has a passing game to go along with its option ground attack. The Hawks will also hit you on defense. It wouldn’t be a big surprise if Neshaminy needs another one of its patented comebacks late in the fourth quarter.

Souderton (2-6) at Truman (5-3), Friday, 7 p.m. >> Souderton was optimistic entering the season, but it hasn’t happened with just two wins. One was on the first week of the season and the other was a recent five-point victory against struggling William Tennent. With all of their weapons it’s still hard to fathom how the Tigers got shut out last week, but this represents a great chance to get back on track and up to the six-win mark heading into the Bensalem contest.

Conwell-Egan (3-5) at Bonner-Prendergast (1-7), Friday, 7 p.m. >> Although the home team has just one win, it doesn’t mean this will be easy. Bonner-Prendie lost by just one point to Lansdale Catholic, which beat Conwell-Egan by 10 points. It also plays a tough schedule that includes two Inter-Ac teams. Still, this is the type of game the Eagles should win to keep their post-season possibilities on a positive course.

Springfield Montco (2-5) at Morrisville (3-4), Friday, 7 p.m. >> The Dawgies are coming off a bye and the week off should help them rest and heal up. It really represents a must win because Mo’ville will be a decided underdog in its last two regular-season games against New Hope (7-1) and Bristol. After temporarily dropping the program last year, Springfield comes to Robert Morris Stadium on a three-game losing streak. Keep in mind, however, two of those losses were to Bristol and New Hope. This could go either way.

Bensalem (4-4) at Council Rock North (1-7), Saturday, 2 p,m. >> The Owls really showed what they are made of by battling Neshaminy hard last week and accumulating over 500 total yards. If they play like that again Saturday, this shouldn’t be a big problem. It’s been a real struggle for the Indians and at this point their season pretty much boils down to trying to find a way to upset Council Rock South next week.

Bristol (6-1) at Delaware Christan (5-3), Saturday, 2 p.m. >> Delco Christian is coming off a win over formerly undefeated Class AAA School of the Future, but you don’t want to make too much of that. It also beat Valley Forge by only four points. Bristol hammered Valley Forge, 50-6. As long as they remain healthy, the Warriors should head to the playoffs with just the one loss.