Spring-Ford gets back on track, downs Boyertown 16-0 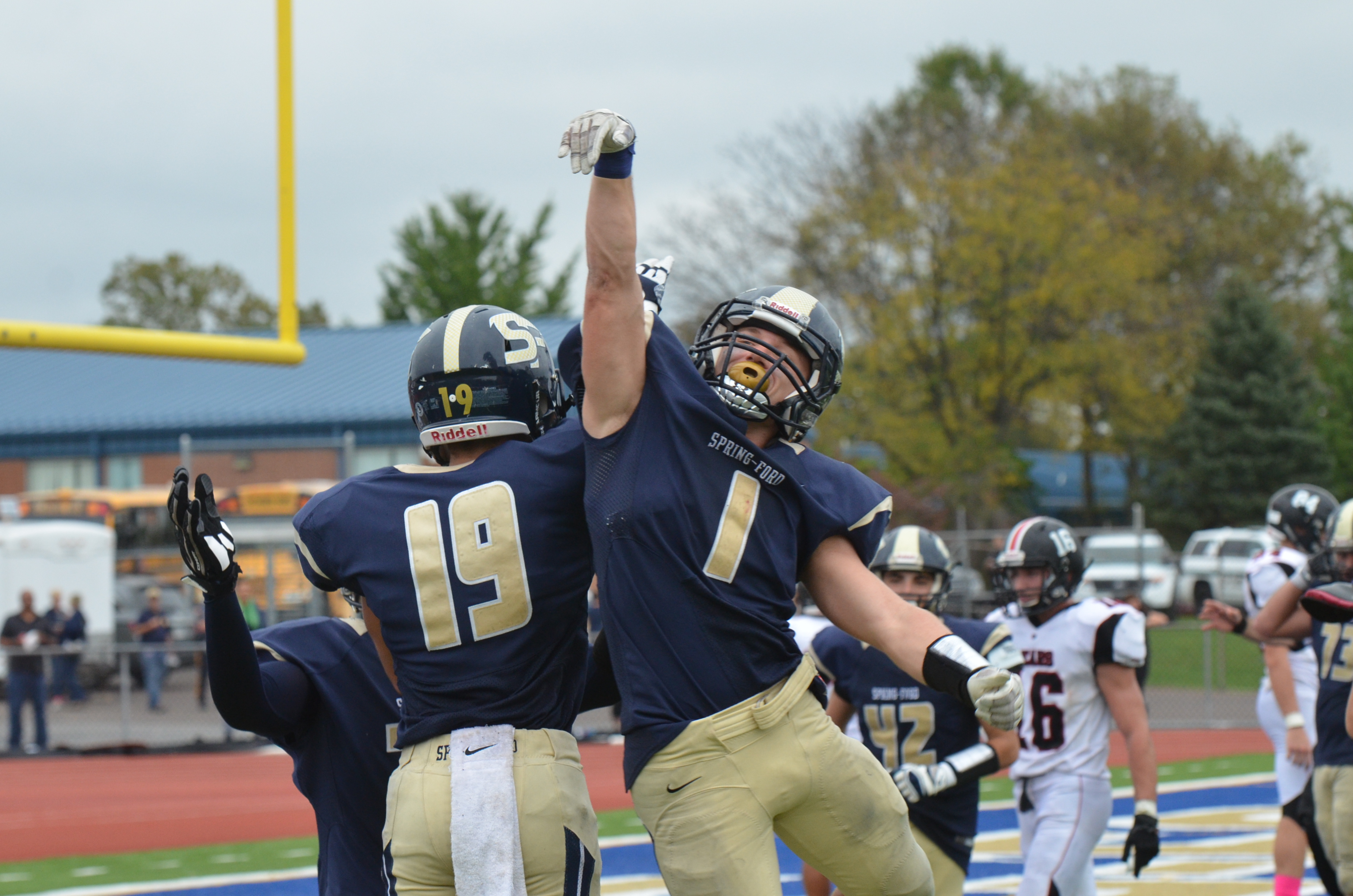 ROYERSFORD >> It seemed almost inconsistent with the nature of the day.

Spring-Ford staged its annual Homecoming festivities in conjunction with Saturday’s game against Boyertown. And while the Rams put a happy cap on the raucous day with a 16-0 victory over the Bears, head coach Chad Brubaker was left wanting by the way his players came out.

“I’m disappointed by the perception we were uninspired,” he said as the party atmosphere at Coach McNelly Stadium and vicinity wound down. “We have to execute better. We’ll check the film.”

It was a very close Pioneer Athletic Conference (Division 1) game through the entire first half, the Rams going to the locker room with a 3-0 lead courtesy of a Taylor Smith field goal. Three other series saw SF (3-1 PAC, 5-3 overall) end with a missed field goal, on downs and with an interception.

To its credit, Boyertown’s defense played a prominent part in keeping pace with Spring-Ford. Blaise Caroselli intercepted a pass three plays after the Rams’ Cole Trauger recovered a fumble at his 37 to stop a Bear march that featured big runs by fullback Marcus Thomas (17 yards) and quarterback Ayden Mathias (14).

“Our kids played their hearts out,” Boyertown head coach T.J. Miller said. “It doesn’t matter if the opponent is a Spring-Ford or a winless team … it’s a testament to what our seniors have built on.”

It was a first half where the kicking game was in the spotlight. Smith had a 39-yard field-goal attempt blocked when the Rams’ first possession stalled at the Boyertown 22, and Declan Coyle’s attempt to pull the Bears even at the half saw his 25-yard try blocked.

Smith’s 37-yard field goal attempt — his second of two in the first half — was good with 2:39 left. It remained the game’s lone scoring until the first two minutes of the second half, when Spring-Ford created more separation on the scoreboard.

Justin Defrancesco (20 carries, game-high 135 yards) sprinted through a left-tackle hole at the Ram 45 and roared down the Boyertown sideline for a touchdown with 10:44 on the clock.

“We got a huge block from (Noah) Silva,” SF quarterback T.J. Pergine said. “It opened a huge hole for Justin, who has speed. It brought life to the team.”

Spring-Ford added a final touchdown with less than two minutes to go, Pergine hooking up with Colby Goldsmith (two catches, 10 yards) on a two-yard toss.

Turnovers ended up a big issue for the Bears. Goldsmith’s interception of Mathis at the Ram 39 set the home team up for an 11-play, 30-yard drive culminating with Smith’s field goal, and Cole Trauger recovered a fumble to halt the Bears at the Ram 37 with less than 1-1/2 minutes until the half.

A lost fumble quashed one drive at the Spring-Ford 16 near the end of the third quarter, and Clarence Thomas intercepted a Jerry Kapp pass to close out the game.

The Rams’ passing game sustained drives all day long. Pergine completed 15 of 27 tries for 158 yards, five to Defrancesco for 53 yards and three more to Dante Bonnani for another 53.

“They (Boyertown) like to play a lot of man defense,” Pergine said. “We took advantage of that, executing pretty well.”

Credit for that went to the Ram line of Silva, Gionvanni Guarna, Matt Lepore, James Begg and Gunnar Romano, who kept their Bear counterparts at bay.

“Our offensive line was pushing off the ball,” Pergine said.

On the defensive side, Spring-Ford limited Boyertown to just 66 yards passing on combined 8-for-21 accuracy. Mathias had the bulk of the passing work, going 7-for-18 for 60 yards while Jerry Kapp accounted for the rest late in the second half.

“Our defense did a good job,” Brubaker said. “I was concerned with their offense — we’re not real big. We hung in there when we game them short fields.”

The Bears’ offense covered 197 yards on the ground, led by Mathias (19 carries, 75 yards). Thomas added another 68 largely hard-fought stripes on 17 tries, and Nick Moccia had 51 on five carries.

“Our backs did the best they could,” Miller said.

The win got the Rams back on track following last weekend’s 28-7 loss to Perkiomen Valley. All alone in the division’s second-place slot after dropping the Bears (2-2, 2-6), they will visit neighboring rival Owen J. Roberts next week in a continuing bid to extend their season well into November.

“We’re in position to win out and make the playoffs,” Brubaker said. “The players have to decide if they have the passion to do that.”

“With the loss to PV, we’re not stopping there,” Silva added. “We’re going to work hard this whole week. Our tank is still full.”