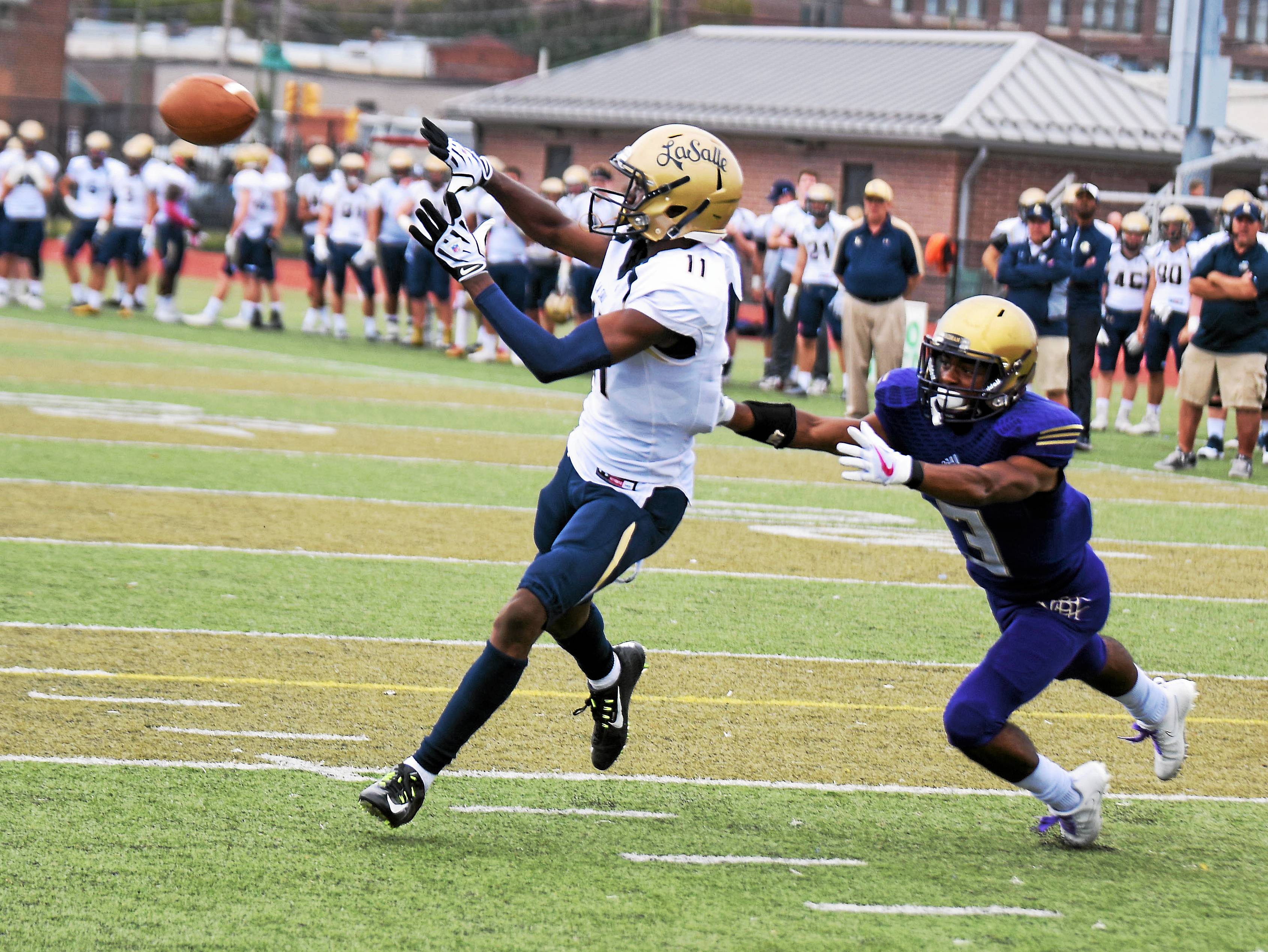 By halftime he had four TD throws in all — two to fellow senior Troy Holland, two to freshman Marvin Harrison Jr.

“Troy, I’ve been friends with all four years and Marvin’s a freshman but I got used to him throughout the season,” a smiling Solecki said on this sunny afternoon at the South Philadelphia Super Site. “It’s been good. (Marvin’s) really stepped up and done his job.

“Sometimes we forget he’s a freshman because he’s doing so well.”

All three were a big part of Saturday’s Philadelphia Catholic League Red Division matchup, as La Salle — No. 2 in this week’s Pa Prep Live Top 20 — pulled away early to a 42-7 victory over the Cahillites.

On the Explorers’ first series, Solecki hit Holland down the seam in stride for a 48-yard score and a quick 7-0 lead.

“It’s good to set the tone for the offense and the defense,” said Solecki, “for both sides of the ball and the team as a whole. It’s good to get out and put seven on the board.

“We expect to score every time we have the ball.”

On a slant, Solecki hit Harrison Jr., who sped away to a 45-yard score and a 14-0 La Salle lead barely six minutes into the contest.

The Explorers had a nine-play drive to end the first quarter, capped off when Solecki found Holland on another slant, good for 13 yards and a 21-0 Explorer advantage.

Joey Burnham finished off back-to-back Explorer drives with short touchdown bursts (one, two), and then with 47 seconds to go before halftime, Solecki found Harrison Jr. for a 13-yard score and a 42-0 lead at the break.

Solecki was a sharp 8-of-10 for 162 yards and four scores. Holland caught two passes for 61 yards — both of them touchdowns, and Harrison Jr. caught three balls for 63 yards and a pair of TD’s.

“Everybody played well. It was a good trip,” La Salle coach John Steinmetz said. “It was a good day. The offense was really cooking.”

“We knew we had to get off to a hot start,” Solecki said. “Coming off a bye week, we didn’t wanna show any rust out there. So it was good to get out there and put two (TD’s) on the board quickly.”

Liam Trainer had a sack early for the Explorer defense, which allowed just a single first down in the opening half. With the clock running after halftime, the Explorers were able to play their back-ups.

Roman (1-7, 1-3 PCL Red) did get on the board when quarterback Jeff Grosso threw a nice deep ball to Malik Griffin, who raced to an 82-yard score and the only points of the second half.

“It was good to get a bright spot,” Roman coach Jim Murphy said. “On offense, (La Salle) can do everything, so you gotta be able to defense all facets of the game.”

The Explorers now get ready for their Week Nine showdown with St. Joe’s.

“It’s definitely a big game for us, as all Prep-La Salle games are,” Solecki said. “We’re excited. We’re gonna get after it, have a solid week of practice and get down to Widener University on Friday.”