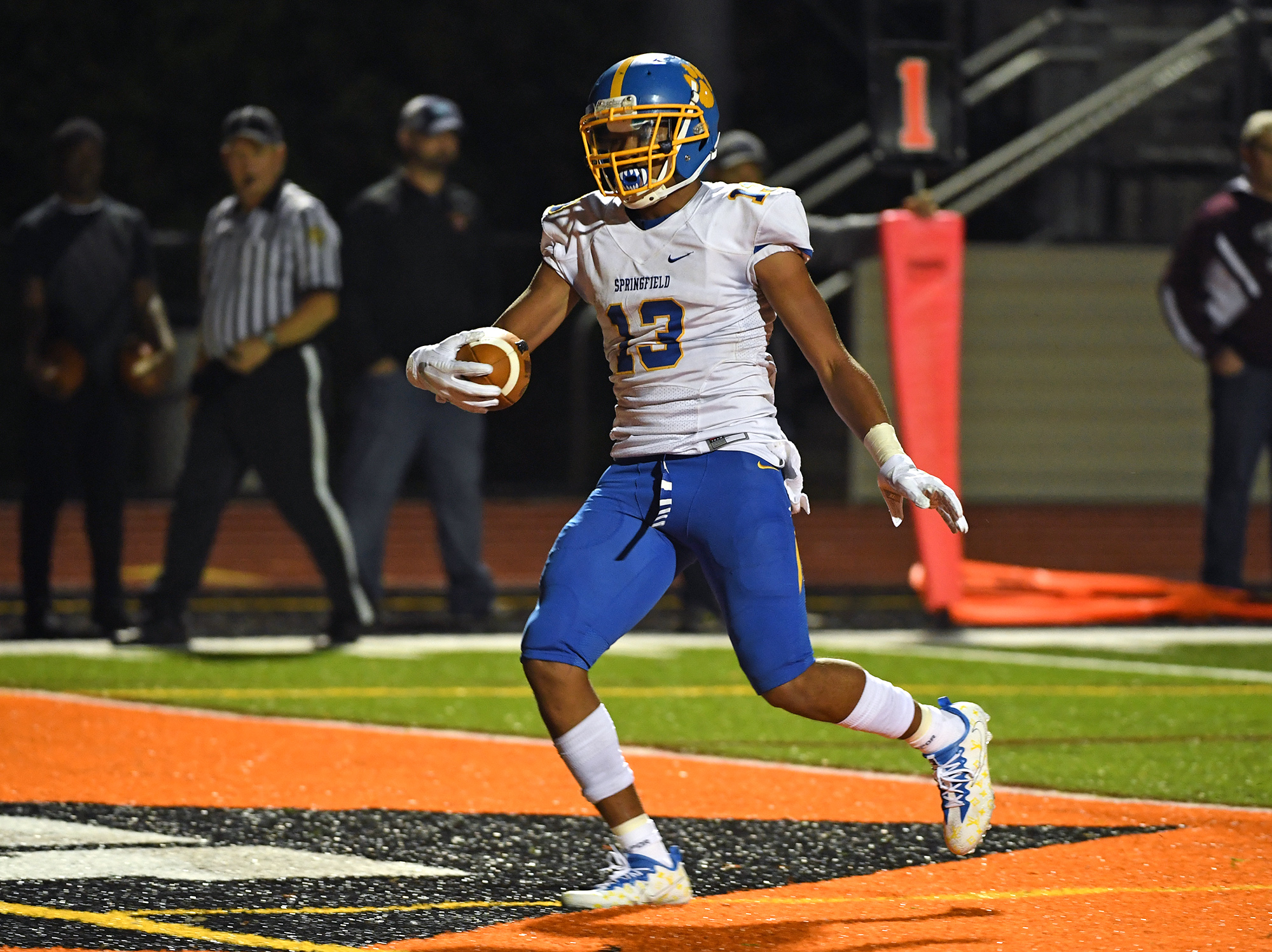 NEWTOWN SQUARE >> Even in the most special of football seasons, and Springfield keeps digging deeper into one, there will be moments of intense challenge.

Philip Shovlin and his fellow Cougars defensive backs were prepared for one Friday night.

Aware they would be visiting Marple Newtown and quarterback Anthony Paoletti, Delaware County’s all-time leading passer, Springfield was ready to do what it does best: Swarm in the secondary.

Building an early lead, then bracing for the Marple Newtown challenge, the Cougars made three of their four interceptions after halftime, including one by Shovlin with 4:31 left to effectively complete a 42-19 victory. By then, Shovlin’s two touchdown runs had begun to help Springfield move to 8-0 overall and 7-0 in the Central League.

“I believe we are the best secondary in Delaware County,” Shovlin said. “They started pounding the ball on us in the second half. We just got a little too comfortable at halftime. But we’re a fourth-quarter team.”

The Cougars established early control, taking a 13-0 lead in the first quarter. After Max DiFonzo blocked a punt to put Springfield in business at the M-N 26, Frank Durham caught an eight-yard touchdown pass from Jack Psenicska. Later in the quarter, Ja’Den McKenzie scored the first of his two touchdowns on a six-yard run.

The Tigers responded with a 25-yard Luke Ciavardelli field goal in the second, but two Shovlin touchdown blasts in the final 7:54 of the half helped give Springfield 27-3 halftime comfort.

That’s when Marple Newtown responded, relying heavily on the strong running of Marlon Weathers to soften the Cougars, then scoring on Weathers’ seven-yard reception from Paoletti. When Aaron Diamond snagged a two-point conversion pass from Paoletti, the Tigers were within 27-11.

“There were a couple breakdowns,” Springfield coach Chris Britton said. “But overall, I thought we played pretty well.”

The Cougars would be at their best as the Tigers continued to apply pressure. DiFonzo punctured the next Marple Newtown drive with an interception, preventing a complete change of momentum. With 11:01 to play, Patrick Clemens added a pick to do the same.

“We are very athletic in the secondary,” Britton said. “They do a good job with fundamental things. And we work it.”

Britton smiled at the notion of the Cougars’ “ball hawk” mentality.

“We just work on fundamentals,” he said. “And we have a good group of guys.”

Quarterback Jack Psenicska threw for 154 yards and a touchdown, and he scored on a one-yard run with 8:49 left. His conversion pass to Chris Finizio gave the Cougars a 35-11 lead, but did not yet silence Paoletti, who would answer with a 10-yard touchdown pass to Luke Cantwell. When Weathers caught a two-point pass, the score was 35-19 and any parade to the parking lot was delayed. Clemens, though, recovered the ensuing on-side kick.

Springfield running back Philip Shovlin makes a move against Marple Newtown linebacker Luke Jelus during a game at Marple Newtown.. (Special to the Times / ERIC HARTLINE)

After Shovlin’s interception, McKenzie completed his 116-yard rushing night with a 40-yard touchdown sprint with 2:50 left and the Cougars would win by 23, even if it often felt closer.

Paoletti finished with 206 passing yards and two touchdown passes, but the Tigers fell to 4-4 overall, 4-3 in the Central League, yet with continued playoff aspirations.

“We’re turning the page,” Tigers coach Chris Gicking said. “We’re going to get better, starting tonight. We have a long way to go yet. Credit goes to Springfield. They have a really good team. But we have two more Central League games to play.”

And most likely, present a difficult challenge.

Avon Grove defense steps up in win over Great Valley