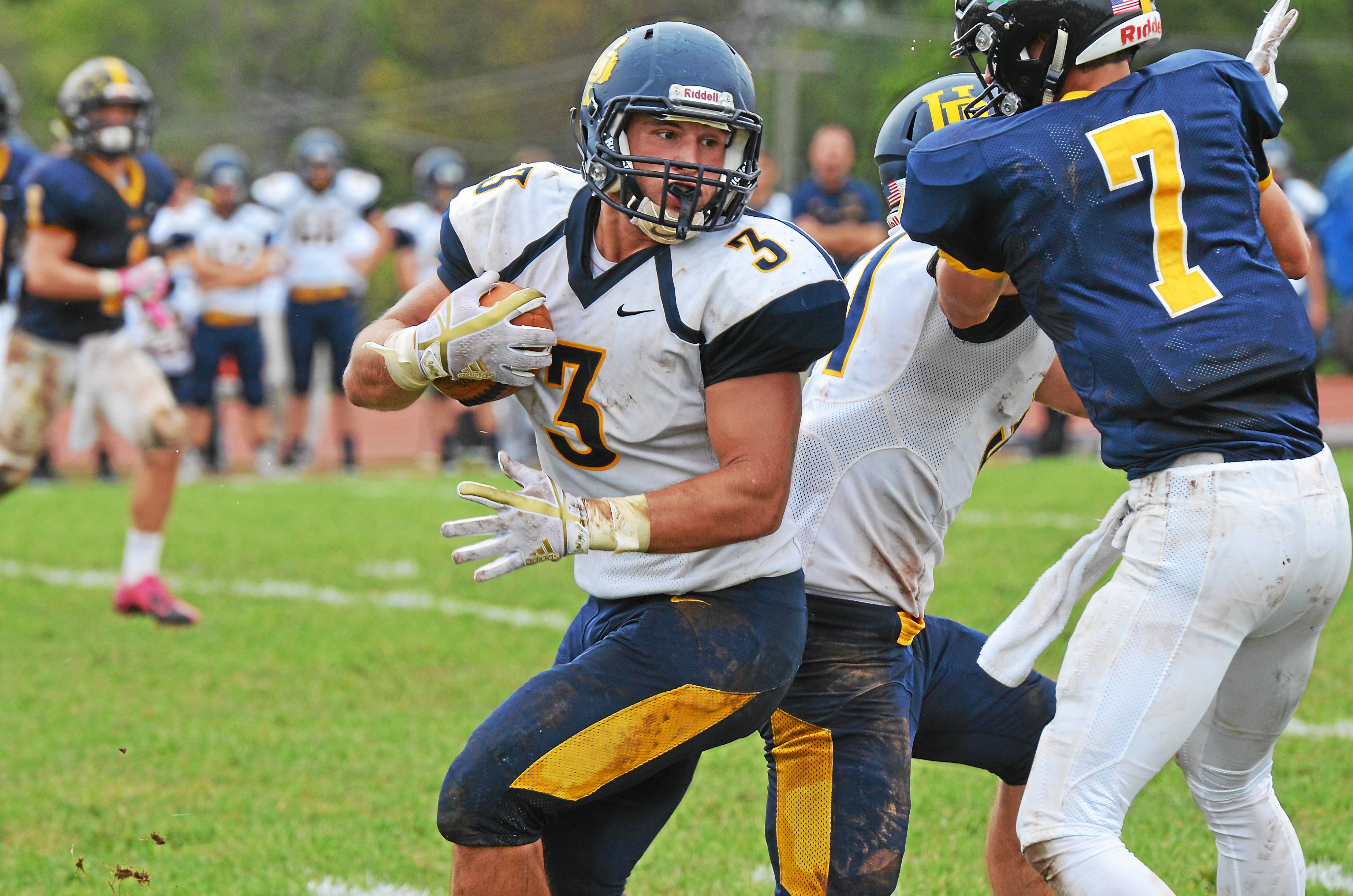 Their play Saturday in a pivotal showdown against undefeated Pope John Paul II proved a testament to that fact.

Luke Whary’s pick-six coupled with the battering-ram play of older brother Tyler were effective in wearing down a gritty PJP squad en route to a 41-14 victory on the Golden Panthers’ Homecoming Day.

The win comes exactly one year to the day after the Indians’ convincing 32-13 victory over PJP in a matchup that held the same weight. Tyler Whary was huge in that game, rushing for more than 100 yards and a score as Upper Perk was able to coast it out after building a 19-point lead after three quarters.

Saturday, Tyler Whary was huge again, finishing with a game-high 114 yards and two touchdowns to lead a trio of runners that amassed 306 yards on the ground. Tyrese Reid added 68 yards and two scores on 11 touches with Austin Tutolo churning his way for 87 more yards and a score on another 11 touches. Upper Perkiomen’s (3-1 PAC, 5-3 overall) 457 yards of total offense was their second best output of the season as the team battled back from a 14-13 deficit with 27-unanswered points.

“We knew it was going to be muddy so we had to come in and ground and pound,” senior Tyler Whary said. “We have three amazing running backs, it doesn’t get much better than that.”

Defensively, the Indians held their own against a potent PJP (3-1, 7-1) attack that came in ranked third in the PAC in total offense (334.9 yards per game), causing four turnovers, including a momentum-shifting pick-six by junior linebacker Luke Whary.

PJP quarterback Matt DeLaurentis was his usual self in the pocket and in scramble mode, throwing for 249 yards on a 23-for-39 passing effort. His leadership was on full display after PJP fell down 13-0 in the opening minute and a half of the first quarter, guiding the team on two scoring drives on the team’s next three possessions. His 49-yard deep strike to Ricky Bearden (three receptions for 68 yards) set up AJ Natale’s 10-yard touchdown run to make it 13-7 before his 31-yard pass to Bearden on a slant pattern two drives later set him up for a 1-yard sneak and a 14-13 lead with 8:30 left in the half.

From there, however, it was all Upper Perk. The Indians answered on the team’s next possession, Reid finding the edge for a 38-yard score and a 21-14 lead after a converted 2-point try. Luke Whary then came up with his aforementioned tide-turning pick-six, intercepting a lofted pass from the PJP quarterback before breaking a few tackles and going 75 yards to the house.

His brother was providing him guidance along the way.

“I was screaming ‘watch behind you,’” Tyler Whary described of his brother’s runback, which featured a thundering truck of a PJP receiver. “He just saw him (PJP receiver) coming and lowered his shoulder.”

“First time pick for me,” Luke said. “I saw an opening down the sideline and I took it. Me and the PJP receiver made contact and I did what I had to do to keep going.”

A scoreless third quarter yielded two turnovers for the UP offense, before the team found its rhythm again in the fourth — a Reid three-yard score up the middle making it 34-14 before Tyler Whary capped his day with a five-yard burst up the middle two drives later.

NOTES >> PJP’s Jacob Bildstein led the way with seven receptions for 74 yards. … PJP’s 279 yards of total offense was its fewest since registering 262 in a win over Chichester in Week 3. … UP’s Trevor Stephen finished with a reception for 60 yards with quarterback Tyler Keyser finishing with 37 rushing yards. … UP was penalized 10 times for 110 yards. PJP was penalized once.