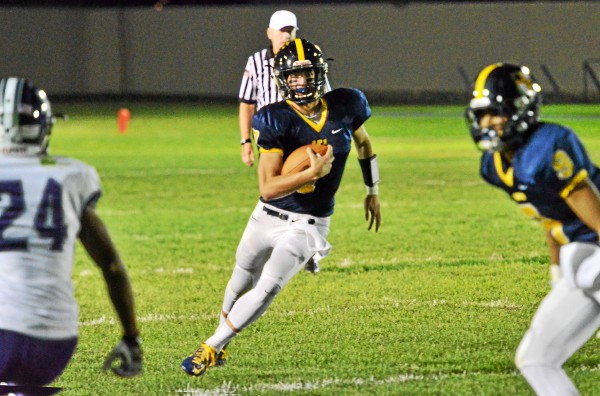 UPPER PROVIDENCE >> They’ll admit to their lack of size.

But in terms of physicality, Pope John Paul II will go nose-to-nose with any team in the Pioneer Athletic Conference.

That again will be tested as the Golden Panthers face off against a hard-nosed Upper Perkiomen squad in a pivotal PAC Frontier Division matchup Saturday at 1 p.m. that could turn the race into a two-team race by the end of the afternoon.

Pope John Paul II (3-0, 7-0), undefeated through seven games for the first time in school history, will stay alive in the divisional race with a win or a loss. Upper Perkiomen, however, needs a win to stay alive after being dispatched by Pottsgrove 55-24 in last week’s contest. Upper Perkiomen head coach Tom Hontz saw some positives in last week’s loss as his team is looking for its signature win of 2017.

“We are excited to play a very talented PJP squad,” Hontz said. “Despite the score, we did do some good things against Pottsgrove and so we are anxious to see if we can finally knock off an undefeated team. We have three losses this year and those teams we lost to are a combined 19-0. We need to have our own signature win.”

That’ll be tough against a PJP squad that continues to pile up the points. Through the team’s 7-0 start, the Golden Panthers have scored 34 or more points in six of their wins. Quarterback Matt DeLaurentis continues to shine, throwing for 1,168 yards and 12 touchdowns (second-best in PAC), while his elusiveness in the pocket and innate ability to scramble also has netted the signal caller 246 yards and seven touchdowns on the ground. A win will need to come from his arm, and more importantly, a defense that has continued to stand tall against the run (third-ranked rush defense in PAC).

“Being the most physical team every single week is a huge key,” PJP senior defensive lineman Chris Haffey said. “We’re not going to overpower teams with our size, but we’re going to be there every single play, all game.”

“We have to stay focused,” added defensive lineman Denver Francis. “We’re not really big on looking at the stats and everything but we know we have to come out and go 1-0. We have to stop the run, shut down whatever they have for us. We’ve been preparing all week and we need to continue doing that.”

Upper Perkiomen’s Austin Tutolo raises his arms toward the referee, hoping for a touchdown signal after his one-yard plunge. The referee obliged, prompting a celebration from the running back. (Sam Stewart – Digital First Media)

Staying level-headed has been key for the Golden Panthers through their undefeated start. Seeing PJP at practice on Thursday, the team didn’t carry themselves as cocky or assured of themselves. Hungry stands out as an identifiable adjective. Through the lean years, Haffey and Francis have also been looking for the team’s signature win. That may come Saturday against an Upper Perk team that downed the Golden Panthers 32-13 last year in a game that held the same weight.

“We’ve been trying to get the underclassmen to stay focused,” Francis said. “Yeah, 7-0 sounds nice and everything but we have to stay prepared and not taking anything for granted. Our season is on the line, we have to keep on going.”

Key Matchup >> Upper Perkiomen enters with the second ranked rush offense and they’ll face a third-ranked PJP rush defense. UP is led by a trio of backs, including power runner Tyler Whary (528 yards on 68 carries and six touchdowns), speedy Tyrese Reid (420 yards and five touchdowns on 46 touches) and Austin Tutolo (310 yards and three scores on 45 touches). “They have a lot of really talented guys, a great coach,” Haffey said of Upper Perkiomen. “They have a lot of guys that have played for a while. They are a very experienced team. I’ve bene focused on making sure we’re wrapping up, making sure we’re playing hard and just playing every single down like it’s our last.

Hall of Fame >> PJP will have induct its first-ever Hall of Fame class, which will include the 2014 baseball state championship team.

Homecoming Festivities >> The game will serve as PJP’s Homecoming. It has also been selected as the Game of the Week by the Philadelphia Eagles, so Eagles cheerleaders and mascot “Swoop” will be on hand.

A look at the other games on Saturday:

The Vikings, ranked No. 10 in the latest PA Prep Live Top 20, can clinch the Liberty Division with a victory over an improved Norristown squad that’s coming off a 35-0 victory over Methacton. Staying level is key for the team, says head coach Rob Heist as the team has adopted a “1-0 mentality” that others in the league have done. The defense will look to continue its torrid stretch after forcing a potent Rams offense to punt nine times last week. QB Cole Peterlin will also look to continue his strong season after throwing for 119 yards and rushing for 90 more in last week’s win.

D-Up >> The Vikings’ defense has allowed one touchdown all season at home. On the road, however, their averaging 17.8 points allowed.
Caught in a Webb >> Norristown’s Izaiah Webb threw for a career-high four touchdowns in last week’s victory.

How the Rams rebound from last week’s 28-7 loss to rival Perkiomen Valley will be the key. It wasn’t pretty for the Rams, who were held to a season-low 218 yards of total offense while punting the ball nine times. The jury is out on how the team will respond, but the Rams need to right the ship to keep their district playoff hopes alive (No. 17 in latest district rankings). “I know watching the game film didn’t make anyone feel better. I think the jury is out until Saturday’s game. We’ll see if we’ve bounced back by how we play against Boyertown. If we win out, we still have the potential to make the playoffs and then everyone is 0-0 again,” SF head coach Chad Brubaker said.

The leg of Declan Coyle gave the Bears a huge 24-21 victory over Owen J. Roberts and Boyertown (2-1, 2-5) looks to be finally finding their form under first-year head coach TJ Miller after winning two of its past three. Jamison Moccia and Marcus Thomas stood out in last week’s win, Moccia rushing four times for 117 yards and a score and Thomas 18 times for 79 yards. “Every week we look to improve,” Miller said. “Our goal was to be able to put four quarters together and we did that against a very good Owen J. Roberts team. In the PAC, each week is a big game. We still have things we need to clean up on both sides of the ball.”

Homecoming Festivities >> Spring-Ford will induct two players into its Wall of Fame: Andrew Scanlan (2012 graduate) and Ross Pennypacker (2010). Scanlan, who recently graduated from Northwestern where he finished with 30 receptions for 336 yards, was a senior captain for the Rams who earned first team All-PAC at receiver and defensive back and was named PAC two-way Player of the Year. The first Ram player to be named to the Big 33 game, Scanlan finished with 97 career receptions, 1,656 receiving yards and 20 touchdowns — all SF records. Pennypacker played his college football at Millersville University where he was named an All-PSAC East linebacker. As a Ram, he was named first team All-PAC at linebacker and Defensive Player of the Year. His 92 solo tackles in a season stand as a SF record and his 165 career tackles rank him fourth all-time.

The Hill travels to the Hun School for Parents’ Weekend and will hope to pick up its first win of the season. The Hun (5-0 overall), meanwhile, will look to stay undefeated. Only one game the Hun has been in has been decided by one score — last week’s 33-26 victory over Blair Academy. The team has scored 60-plus points twice and have pitched a 48-0 shutout in Week 3 against Stellar Prep. Hun QB Matt Holly has passed for more than 300 yards in three of those victories, including a 415-yard, five-touchdown performance in the win vs. Stellar.