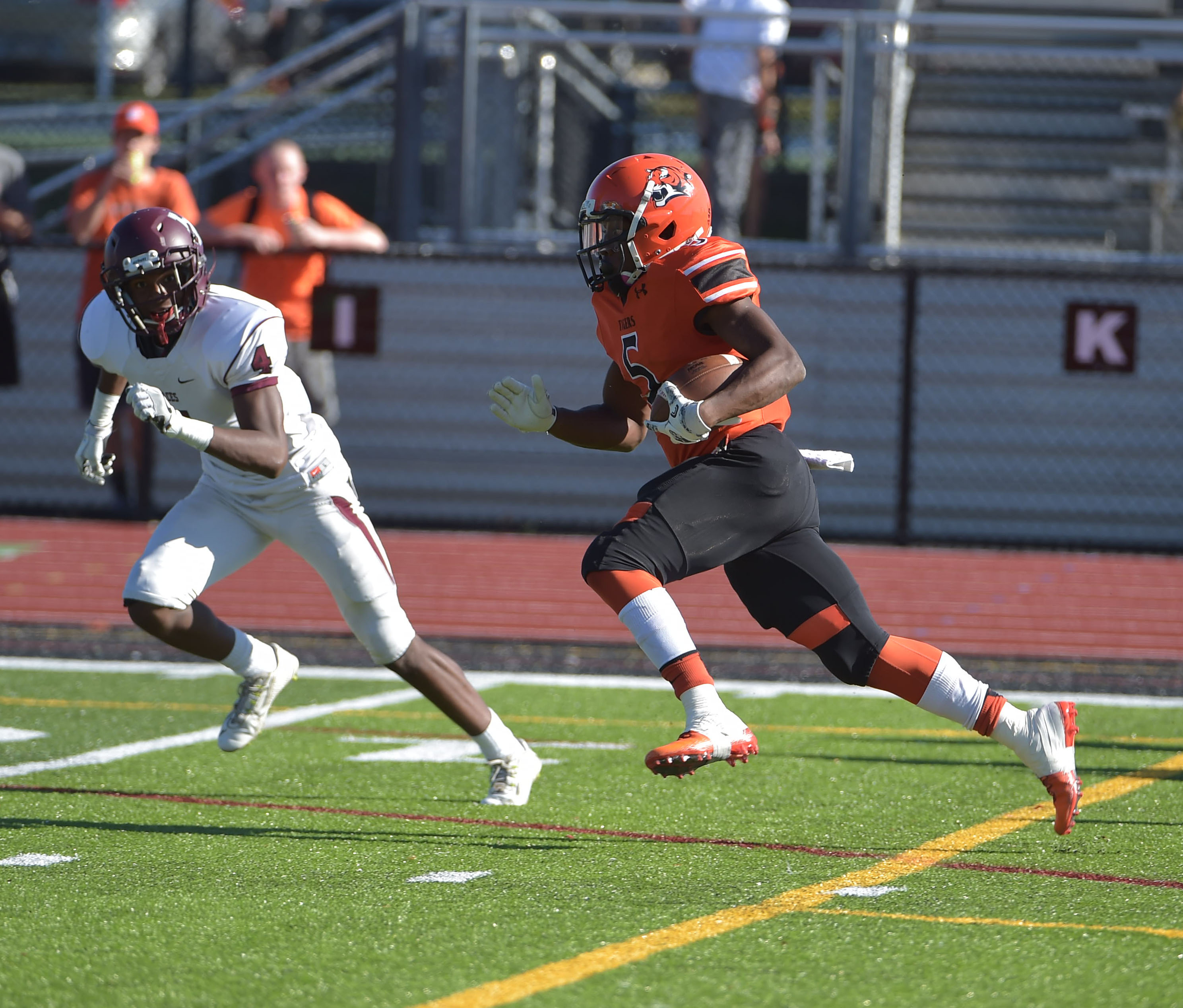 NEWTOWN TWP. >> It was a short practice week.

That didn’t mean practices would be anything but long for the Marple Newtown’s players. The Tigers needed to put their ugly Central League loss to Haverford behind them and spend time preparing for Lower Merion.

“Things that happened are over with,” senior quarterback Anthony Paoletti said. “This was our week to restart and to do things better.”

Paoletti, who struggled through the loss to the visiting Fords, was 20-for-29 passing for 231 yards and three touchdowns as the Tigers rolled to a 44-13 Central League victory over visiting Lower Merion Thursday.

Marple (4-2, 3-1) did enough in the first half to claim a 16-6 lead after two quarters. Paoletti and Aaron Diamond teamed up on a 46-yard completion in the second minute of the game, and Marlon Weathers banged in from one yard away two plays later for the first score.

Four minutes later, it was Paoletti to Weathers on a screen pass for 25 yards and six more points.

Lower Merion got a 42-yard Marek D’Alonzo to Jalen Goodman scoring pass early in the second quarter, while penalties and running plays for losses kept the Tigers out of the end zone in the period.

Luke Ciavardelli booted a 25-yard field goal on the last play of the half to give MN a 16-6 lead at the break.

Coach Chris Gicking got the home team fired up with his halftime talk, and Marple Newtown needed only four plays to drive for scores on its first two possessions of the third quarter. Paoletti had scoring passes to Luke Cantwell and Alden Mathes, the second coming less than a minute after a Cantwell interception.

Three plays after a Kyle Tobin sack in the fourth quarter, Weathers ran 30 yards for his third TD.

“We got back to playing Marple Newtown football,” Gicking said. “We did a lot of things better, but we know we still have to be better in some of the things we’re doing.”

Paoletti will go into next week’s big Central League game at Garnet Valley needing 44 yards to break Gicking’s record of 5,897 career passing yards. He has other things on his mind.

“We’ve already put this game aside,” he said before heading off to watch Garnet Valley play Haverford. “We want to go over (to Garnet Valley) and win our next football game.

“All week we were determined to play better today after the way we played last week. After we did our running, some of us ran extra sprints after practice. And we stayed around working on our (pass) routes. The great thing in this game was having guys going and getting the ball all over the field.”

Marple’s first-string defense was scored on only once.

“We were a lot more focused in this game,” Tobin said. “Coach (Zach) Young was helping call the defensive plays and really did a great job. Now we know we have to have another good week of practice to get ready for our next game.”