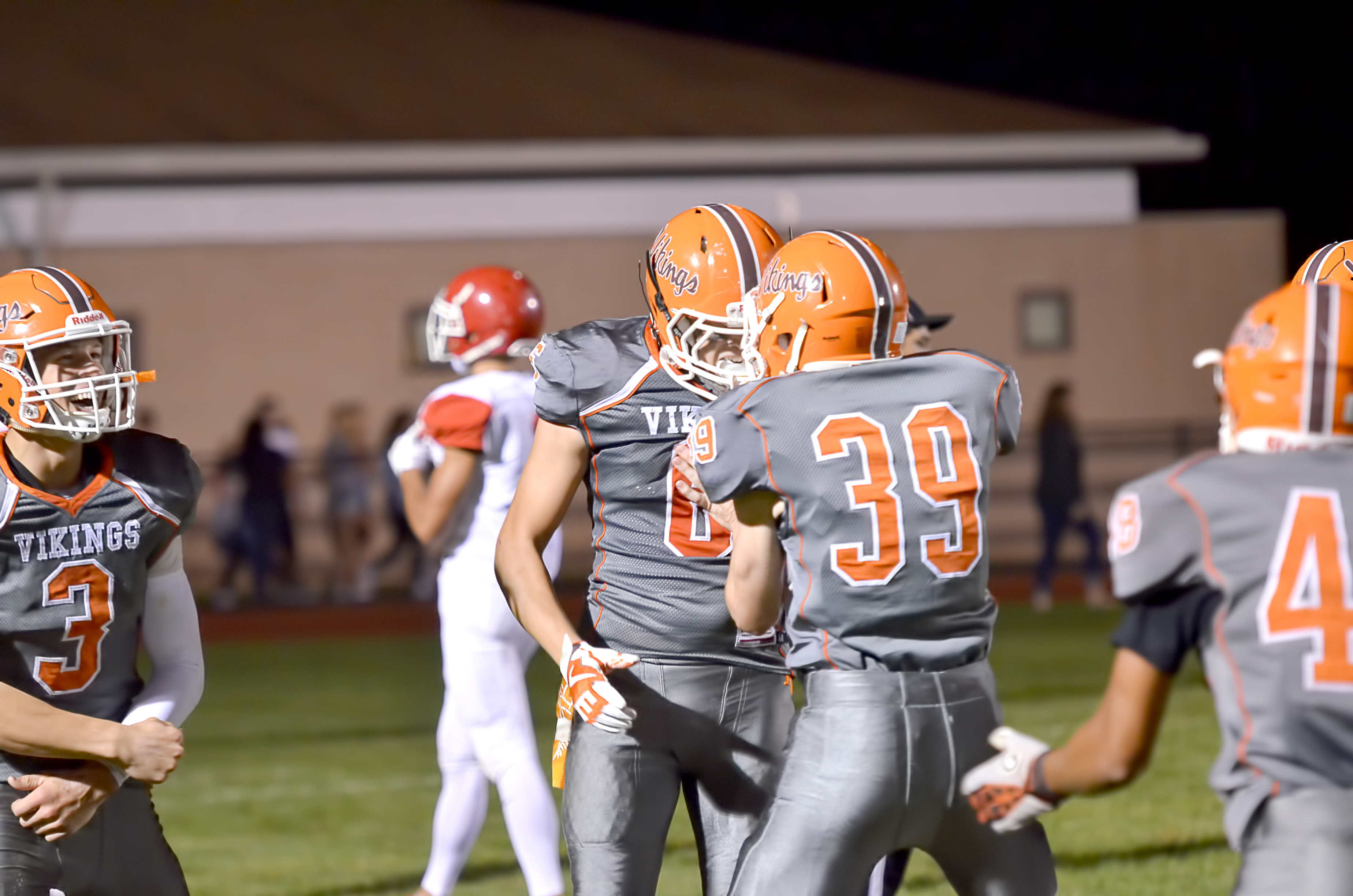 It was a motto defined by Perkiomen Valley in a run to two Pioneer Athletic Conference titles in three years under a special senior class led by PAC record holders Stephen Sturm and Justin Jaworski among a slew of next-level talent.

Watching the Vikings down previously undefeated Owen J. Roberts 27-0 Friday night, it was clear the motto under second-year head coach Rob Heist had carried on.

And it’s leading them to wins.

Playing without starting slot receiver Ryan Cerula, suspended for Friday’s game because of an illegal peel back block during the Vikings’ win over 21-13 Interboro, PV got creative in who got the touches. Jon Moccia caught five passes for 88 yards, Brendan Schimpf supplied some pass-catching ability out of the backfield with three receptions. Remy Sell, club-hand and all, sprung for three receptions and 76 yards.

Then there was Isaiah Domine, who helped seal the deal for the Vikings, catching a 67-yard missile from junior quarterback Cole Peterlin on a go route before capping the scoring with a 6-yard touchdown on a goal-line slant. His play spoke dividends … same too his new-found chemistry with Peterlin.

“We’ve had a couple of those throughout the season and we connected on them pretty well,” Domine said. “It was no different (Friday). We just continue to grow with each other. We just need to vibe off each other more off of every game and who knows what can happen.”

“He (Domine) was huge,” Heist said. “The play of the game was the catch he made with a couple of minutes to go in the half. That seemed to give us momentum going into halftime that we never really relinquished.”

It was an eerily similar repeat to the Vikings’ 43-7 victory over Owen J. Roberts a season ago. A week removed from losing Jaworski to an MCL injury, it was Sean Owens (four receptions for 69 yards and three touchdowns) and David Williams (three receptions for 62 yards and two scores) stepping into the forefront. This year, new faces, same result.

“They stepped up big,” Peterlin said.

The all-around effort didn’t stop on offense, either. Playing without starting defensive end Alec Jackson, the Vikings turned in their second shutout of the season. Credit it to a handful of Vikings, whether it be Max Nice and his diving interception, the play of Brian Fehr and Noah Shine at linebacker or a swarming defensive front that helped produce four OJR turnovers. It was a day where defensive co-coordinator Matt Young had trouble finding anyone to single out for their performance. Shine eventually got that honor.

“Our defense was incredible against a veteran group,” Heist said. “Not having Alec was important but we had kids like Justin Daniels and Jahir Holmes step up for us.”

So too, is a revamped Perkiomen Valley squad as they look for their second straight PAC title. Who will step up along the way? For PV, the possibilities go deep.

“Last year we were really fortunate with injuries outside of losing Jaws (Jaworski) for a couple of weeks and Ryan McCourt for most of the season,” Heist said. “So far this year we haven’t had quite that luck. We’ve had a couple of kids bumped and bruised but we’re getting there. I’m hoping we can get healthy soon, but with other players stepping up we’ve been going with the next-man up philosophy. That’s the culture that we try and continue to feed at PV: when you get your opportunity, take advantage of it.”

Upper Perkiomen’s Tyler Whary and Tyrese Reid ran through, around and past Phoenixville defenders all night as the duo combined for 306 rushing yards in a 44-20 victory. More eye-opening was the duo’s rush average, both totaling more than 10 yards per carry.

March to your Own Beat

Spring-Ford marching band member Charlie Nawa was named one of the newest members to the U.S. Army All-American Marching Band. The band will perform during halftime of the Army All-American Bowl on Saturday, January 7.

1. In a special moment from Friday night’s game, Perkiomen Valley assistant coach Jason Basile’s nephew, Bode, was made an honorary flag bearer for the team. Bode, who battles with Autism, led the team out onto the field wearing an orange No. 30 jersey as the Vikings played Friday night’s game against Owen J. Roberts in support of Autism Awareness.

2.  In a battle of two of the top teams in District 1, North Penn came away with a 45-35 victory over Pennridge for their third straight victory after starting the season 0-2. Knights running back KJ Cartwright finished with a game-high 161 yards and a touchdown on 10 carries.

Penn Wood senior Rahiem Bowens celebrates his third touchdown in the final moments of the first half against Haverford School. Bowens went on to score four touchdowns in the 30-27 overtime win. (Digital First Media/Pete Bannan)

3.  Penn Wood’s Rahiem Bowens had quite the day as the Patriots downed Inter-Ac’s Haverford School 30-27 in overtime on Saturday. Bowens finished with nine receptions for 236 yards and four touchdowns, including the game-winner.

4.  Harry S. Truman was brought down to earth by Neshaminy after having started its season 4-0. The Redskins scored on five of their six first-half possessions in a 56-7 rout over the Tigers on Saturday afternoon.

5.  Pottsgrove’s Rahsul Faison’s torrid start has now reached the 1,000-yard plateau. Rushing for 278 yards and five touchdowns in a little more than two quarters of play in a 49-0 victory over Upper Merion, the Stony Brook commit now has 1,044 rushing yards and needs 1,049 through the next five games to break his PAC-leading mark of 2,093 yards last season.