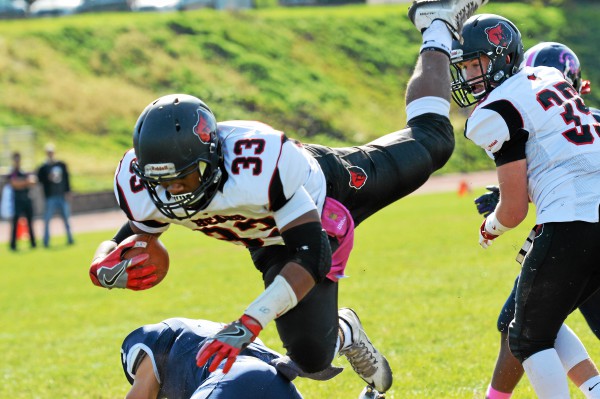 WORCESTER >> TJ Miller looked like a politician trying to find a baby to kiss.

The first-year head coach of Boyertown football had just watched his Bears earn their first win of the season, a  54-14 victory over host Methacton.

But more importantly, it was Miller’s first victory as a scholastic football coach.

And he couldn’t find enough people to thank.

He praised his coaching staff to the skies, and his players and even tossed a bouquet to his players’ families.

Can you blame him?

After all, folks, you just don’t earn your first coaching win every day.

And Miller was soaking it in.

But the fact is, the Bears dominated every facet of the game, actually building a 54-0 lead before the Warriors scored a pair of way touchdowns in the fourth quarter.

“It’s not about me,” Miller said. “It’s about coming out here and getting a win for those guys, who play hard .

“My assistants do a great job of preparing them, and they came out tonight and played hard.”

It was a rout almost from the outset, as the Bears scored on the game’s first three series.

First, quarterback Ayden Mathias’ 25-yard run on the first play from scrimmage set up an 18-yard pass from Mathias to Jerry Kapp three plays later to give the visitors the early advantage.

A kick followed, which the Bears pounced on at the Warriors 29.

From there, it took Mathias five plays to find the end zone from three yards out to put the Bears on top, 13-0 (the PAT was missed).

Next it was the defense’s turn as Kapp stepped in front of an out pattern and streaked down the left sideline unhindered to make the score 20-0 with half of the first quarter still to play.

The early fireworks gone, the Bears then methodically went about adding to their lead, using a 68-yard Mathias-to-Kevin-O’Connor pass play to send the Bears into the break with a 27-0 lead.

And it would only get worse for the home team.

Nicolas Moccia broke off a 45-yard touchdown run on the Bears’ first play from scrimmage in the second half to push the lead to 34-0.

“This is my second 100-yard game of the year,” Thomas said. “I just try and stay focused and keep my feet moving.”

By then, the Warriors were reeling, although head coach Paul Lepre said his team’s troubles began before the season started when a handful of seniors decided not to play out their senior seasons.

“You’d think they’d want to come out and play their last years,” Lepre said, “but what can you do?”

It was their decisions to make.

“It’s one thing to have a strong unit and try and break in a good sophomore, but we have four or five sophomores who are going up against three- and four-year seniors.

“Let’s just say I have a lot of sleepless nights.”

Meanwhile, the Bears were planning a different kind of evening.

“We’re going to enjoy this one,” Miller said.

PJP stays level in 38-13 win over Pottstown
On both sides of the ball, Springfield’s McKenzie has score to settle