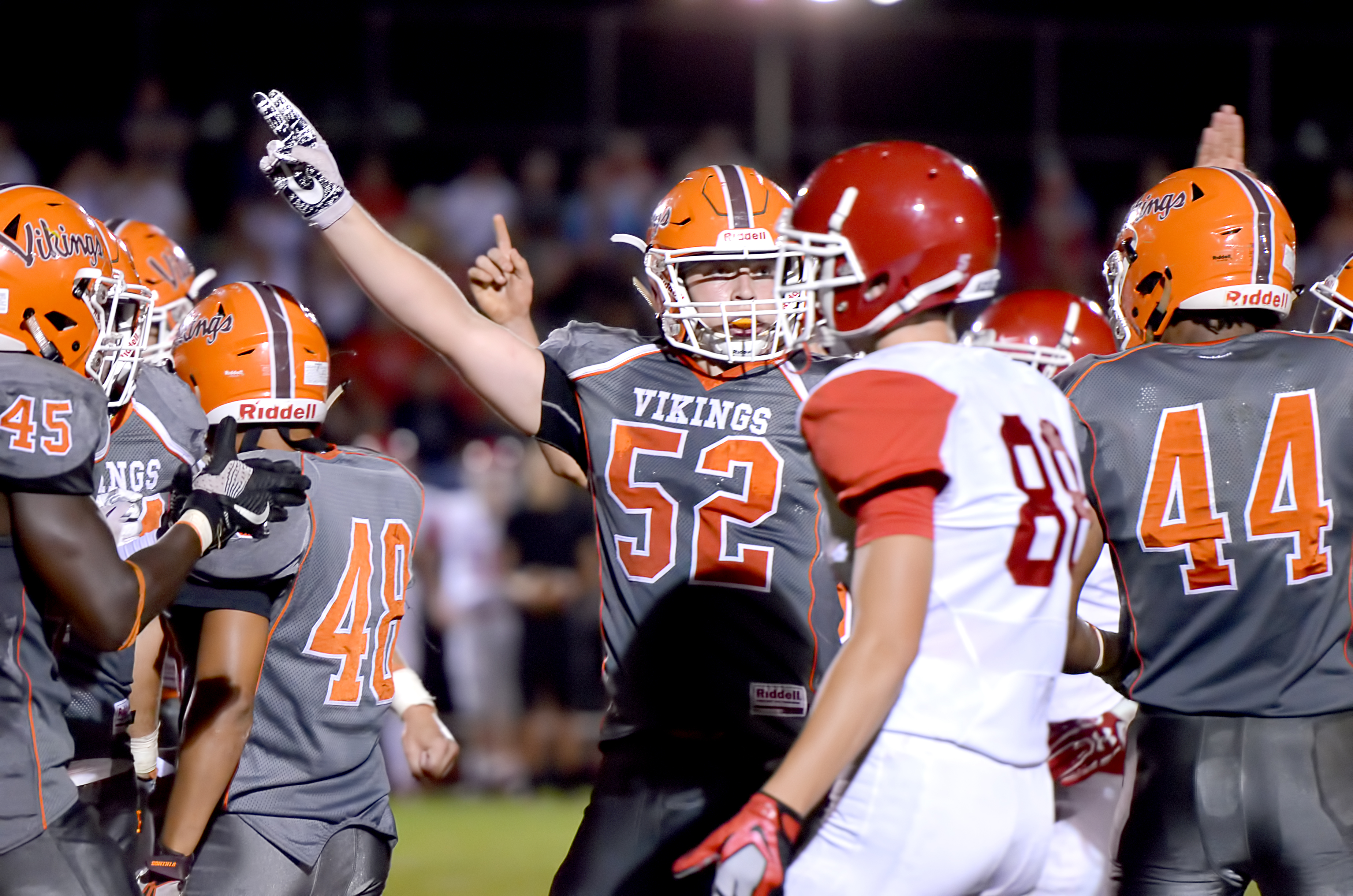 GRATERFORD >> It had the makings of an early season showdown.

The first quarter between No. 13 Perkiomen Valley and No. 20 Owen J. Roberts lived up to that hype. The next three quarters, however, not so much.

The win is the Vikings’ seventh straight victory over Owen J. Roberts (4-1) and marks the second shutout the defense has pitched this season (team secured a 38-0 shutout victory over Downingtown West to start the season). Opportunistic and aggressive, the defense limited the Wildcats’ third-ranked offense to just 135 yards — 78 coming in the first three quarters. Its four caused turnovers were also a season best.

Perkiomen Valley’s Isaiah Domine (6) celebrates with Zach Lomonaco (39) after scoring a touchdown in the second quarter. PV quarterback Cole Peterlin (3) also joins in on the celebration.

The offense took advantage of the gifts the defense created, scoring 13 of its 27 points off caused turnovers. Brendan Schimpf’s one-yard plunge to make it 7-0 in favor of the Vikings capped off a 3-play, 30-yard drive that started because of an OJR fumble. Mike Weir then connected on two field goals, one a little longer than an extra point to end the first half at 17-0, the other a 30-yarder in the third quarter to make it 20-0.

“We kept coming out every drive and pounded the ball running and passing and we just connected,” receiver Isaiah Domine said. “It was a very good effort from everyone on the team, our line, our quarterback, receivers. Everyone stepped up.”

OJR played even with PV through a scoreless first quarter. Its defense lived up to its billing as the No. 1 ranked defense in the PAC with a superb goalline stop on the Vikings’ opening drive. Turnovers and PV possessions with a short field wore on them, however. The 27 points were the most OJR has let up all season — same too, the 307 yards of total offense.

“You can’t turn the ball over in a game like this, period,” OJR head coach Rich Kolka said. “Especially not in a game where you have two teams that are pretty good. We stressed it all week and we didn’t do it. You can’t win a game like this or any game that it’s going to be tight with four turnovers. It’s not happening.”

Perkiomen Valley took the lead late in the second quarter on Schimpf’s aforementioned 1-yard plunge before Peterlin dropped a brilliant dime to Domine on a go route on the team’s next possession for a 55-yard score and a 14-0 lead. Following Weir’s two field goals, one stemming from a fumble on the kickoff return, the other on a interception by Max Nice, Peterlin found Domine again on a slant route to cap the scoring. Domine finished with four receptions for 80 yards and two scores. Jon Moccia added five receptions for 80 yards while Remy Sell — playing with a club on his right arm — hauled in three passes for 70 yards in the win.

“This is one of the better wins that we had,” Domine said. “Especially with all these people here, this being our youth night and shutting them out, it was a good win for us. Still plenty for us to build on.”

NOTES >> Perkiomen Valley’s assistant coach Jason Basile’s nephew, Bode, was given a chance to run out with the team in help to raise awareness for Autism.