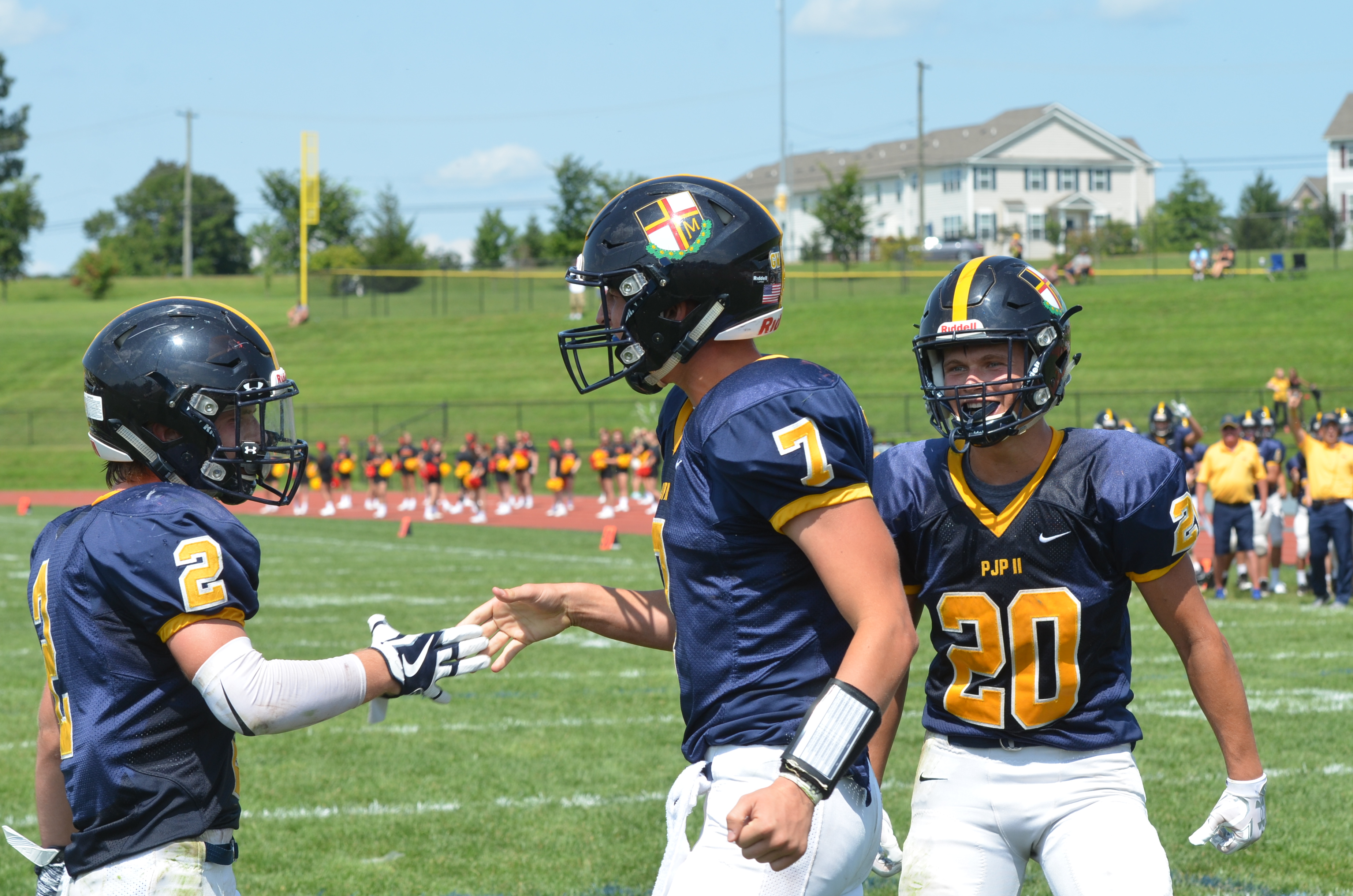 UPPER PROVIDENCE >> Photos of scenes from the stadium at Pope John Paul II in last year’s victory over Schuylkill Valley could have filled a flash drive.

There were countless shots that came from a 33-0 victory over Schuylkill Valley to snap a 21-game losing streak. Quarterback Matt DeLaurentis with an ear-to-ear smile as he was congratulated by assistant coach Tyler Yaculak after throwing for a touchdown pass in the second half, Dan Cirino and teammates mauled by family and friends … but the most poignant of them all was head coach Rory Graver doused in water with a beaming DeLaurentis in the background.

A rebuild was in the works. It started with three more wins and the school’s second-ever berth into the district playoffs last season. Now, in 2017, a veteran group continues to lift PJP to new heights — a 4-0 start for the first time in the school’s brief history putting the team on the map not only in the Pioneer Athletic Conference Frontier Division race, but also in the race for Class 4A prominence.

Pope John Paul II head coach Rory Graver is doused by water in the Golden Panthers’ 33-0 victory over Schuylkill Valley last season. The win snapped a 21-game losing streak and the Golden Panthers have been rolling ever since. (Sam Stewart – Digital First Media)

There was far less pomp and circumstance in PJP’s 42-10 dismantling of Schuylkill Valley to cap off an undefeated non-league slate. Seasoned starters featuring DeLaurentis, Cirino, Jake Bildstein and a formidable line have brought the wins and the confidence. The Golden Panthers are no longer a team content with a win — they want more … a lot more.

“The most important thing is after a win, we quickly refocus and get set of the next game,” Graver said. “Last year, winning for the first time we had a hard time focusing during the week and getting ready for the team at hand. That’s been the difference between this season and last. We celebrate our win but we’re right back and focused on our next opponent.”

“I think the biggest difference is our hunger,” Cirino added. “Being 4-0 is great but that’s not what we worked so hard for this offseason. It’s a great start, but we didn’t work so hard to win four games. We have goals ahead of us and right now we have a mindset that we’re 0-0 entering PAC play. Each game going forward is going to be a grind.”

Players like Cirino are why PJP stands in the position it’s in. A four-year starter through the lean years, Cirino has emerged as the area’s leading receiver (356 yards on 20 receptions and three touchdowns) and a vaunted piece of a formidable defensive unit that ranks third in the league behind Owen J. Roberts and Pottsgrove. His six tackles and one pass breakup on defense in Friday night’s win were coupled with a dazzling five-reception, 193-yard performance at receiver.

And while Cirino gets a chunk of the credit, PJP’s “We Before Me” motto stands out above the rest.

“We all bought into the system ‘We Before Me,’” Cirino said. “If we work for each other, then everything else will come into place.”

DeLaurentis continues to be one of the top passers and playmakers in the league. His 639 yards and seven touchdowns rank second only to Spring-Ford’s TJ Pergine. Bildstein (213 yards) and AJ Natale (204) are eighth and ninth in rushing, respectively. Ricky Bearden is second in the league with two interceptions, and the line … well they’ve been the biggest part of the team says Cirino, literally.

“Games are won up front,” Cirino said. “We go as our line goes and they’ve been getting better each week. They’ve been leading the way up front.”

“Our offensive line: Denver Francis, Rick Garofolo, Bryan Bendig, Mike Ronca, Brandon Snyder and Nick Galbraith have put time in the weight room and put in the time during the offseason,” Graver said. “They keep improving.”

Same too, does PJP.

A bunch of record-setting performances came out of Royersford in Spring-Ford’s dominating 45-21 victory over Berks Conference’s Exeter Friday night. Senior running back Justin DeFrancesco’s 245 rushing yards — on only 13 carries — was good enough to place him seventh on the Spring-Ford all-time list for rushing yards in a single game. Also, senior quarterback Pergine became just the fourth quarterback in Ram history to eclipse 3,000 career passing yards. He joins Hank Coyne (5,595), Trevor Sasek (4,721) and Lance Viola (3,905) among the list.

Pottsgrove’s Rahsul Faison turned in another 100-plus yard rushing game in the Falcons’ 38-20 non-league victory over Glen Mills. Faison, committed to Stony Brook University, has rushed for more than 100 yards in each of the Falcons’ four wins and leads the PAC with 766 rushing yards on 98 attempts (7.8 average).

Faison’s effort wasn’t the only that stood out, however. Owen J. Roberts’ trio of Marcus Martin (82 yards), Sean Praweckyj (77) and Hunter Scherfel (51) were highlights of a Wildcat ground attack that chewed up 294 rushing yards in a 47-0 victory over Upper Merion. In Interboro, Perkiomen Valley’s Jon Moccia (137 yards and two touchdowns) coupled with quarterback Cole Peterlin’s 95 yards highlighted a 265-yard rushing effort by the Vikings offense in a 21-13 victory over Del-Val’s Interboro.

Truman senior Sayyid Saunders took the ball 43 yards to the house on his first carry and the Tigers never looked back on their way to a 42-0 rout of visiting Council Rock South Friday, Sept. 15 at Henry Morgan Stadium, Bristol Township, Pa.

1. >> Harry S. Truman is off to a 4-0 start for the first time since the 2005 season. Already bettering their win total from last season (3), the Tigers have been dominant in all four of their wins, outscoring opponents 176-12.

2. >> In a matchup of the top two teams in the Pa Prep Live Top 20, Saint Joseph’s Prep quarterback Marquez McCray tossed for 144 yards and rushed for 61 more as the Hawks continued to prove that they are dangerous without the graduated D’Andre Swift in a 27-7 victory over Archbishop Wood.

Marple Newtown running back Marlon Weathers, left, cuts back to his left to elude a tackler. The Tigers scored a 14-12 win over Ridley, their first against the Green Raiders since 2005. (Digital First Media/Rick Kauffman)

3. >> Some history at Ridley as Marple Newtown defeated the Green Raiders 14-12 on their own turf. It was the Tigers’ first victory at Ridley since 1971.

4. >> Avon Grove running back Kevin Francis was in fine form in Friday’s victory over Octorara, rushing for 184 yards on 23 attempts with six total touchdowns.