No. 4 Coatesville stunned as Cumberland Valley comes back in final seconds 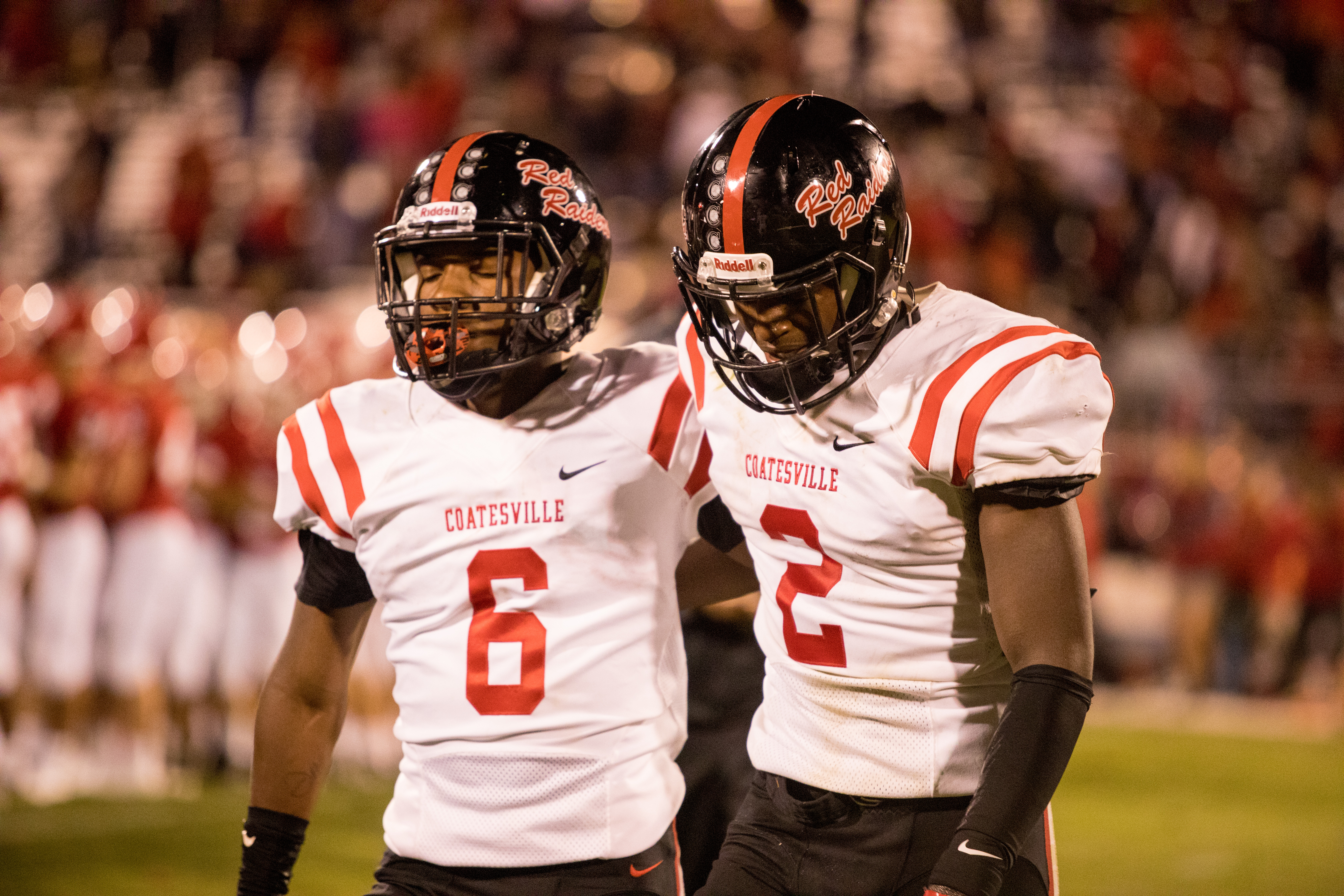 But trustier than a short kick, the off-tackle power play was the choice, and with 3.7 seconds left on the clock, Cumberland Valley’s Jake Palmer crossed the goal line to cap a dramatic second-half comeback.

Coatesville’s 14-point halftime lead slowly and painstakingly evaporated as the hosting Eagles grinded out a 21-14 nonleague win Friday in a battle of two of the top teams in the state.

The Red Raiders won the turnover battle 4-1, but committed 15 penalties for 128 yards.

“We came out and had our chances,” Coatesville coach Matt Ortega said. “We came out with a 14-point lead and created a turnover at midfield and I think if we got to 21 we could have coasted to a win, but that didn’t happen. (Cumberland Valley) got the momentum and we didn’t make the plays on offense or special teams and the defense wore down at the end.”

The Eagles (1-0) reached Coatesville (1-1) territory all four drives in the first half, twice finding the red zone, but the Red Raiders held them off with a pair of fumble recoveries and an interception by Charles Brown. Dapree Bryant gave Coatesville a 7-0 lead on a 41-yard run off a sweep. Avery Young made it a two-score game on the final play of the first half when he hauled in a 13-yard pass from Ricky Ortega, who placed it perfectly in the back corner from the far hash mark.

Another interception by Nick Thompson on the second play of the third quarter gave Coatesville the ball at the Eagles’ 47 but a 14-yard loss on a fumble and a holding penalty pushed the Raiders back to their own 25 and the Cumberland Valley crowd came alive.

“That’s our game to win,” Young said. “We lost this game. (Cumberland Valley) fought hard but we lost this game. We fell off a little at the end and now we have to keep our head up and make sure it doesn’t happen the rest of the season.”

Palmer scored the first of three touchdowns the ensuing drive, and while Coatesville held the Eagles their next possession, that would be the last time. Midway through the fourth Palmer exploded through the middle for a 31-yard touchdown to tie it.

On the following kickoff, Coatesville fielded the ball on its 19 as it was heading out of bounds, a 16-yard swing in field position. On first down, Ricky Ortega was sacked for a 10-yard loss. After a three-and-out, Cumberland Valley took over at the Raiders’ 47 and went back to their ground and pound. The Eagles ran the ball 29 times for 125 yards in the second half after going 19 for 62 in the first half. Palmer had 121 of his 132 in the second, while Coatesville had 12 carries for minus-one in the final 24 minutes.

“Coming out of half we got Jake going and found out one of (Coatesville’s) weaknesses and were going after it,” Cumberland Valley senior Charlie Katshir said.

Katshir, a Penn St. recruit, was shadowed all night when he lined up at wide receiver by Young, a Rutgers University recruit. When the two matched up, Katshir had zero catches and was 0-3 on passes intended to him.

Young swatted away two passes, including one in the end zone in the second quarter.

“I held one of the top wide receivers in the state to no catches, and I’m proud of that, but we didn’t get the win, so it’s bittersweet,” Young said.

Katshir finished with one reception for seven yards, eventually lining up at halfback to get his touches. “That was a lot of fun,” Katshir said of the matchup with Young. “He’s a hell of a player and he’s gonna have a great rest of the year and do things at Rutgers.”

Aaron Young, meanwhile, has yet to get going, by his standards. In two games he has 29 carries for 156 yards and no touchdowns. He and the Red Raiders hope to get on track at home against Reading next week.

“If we respond the right way we can be better in the end,” Matt Ortega said. “We can learn off last year and clean things up and get better.”